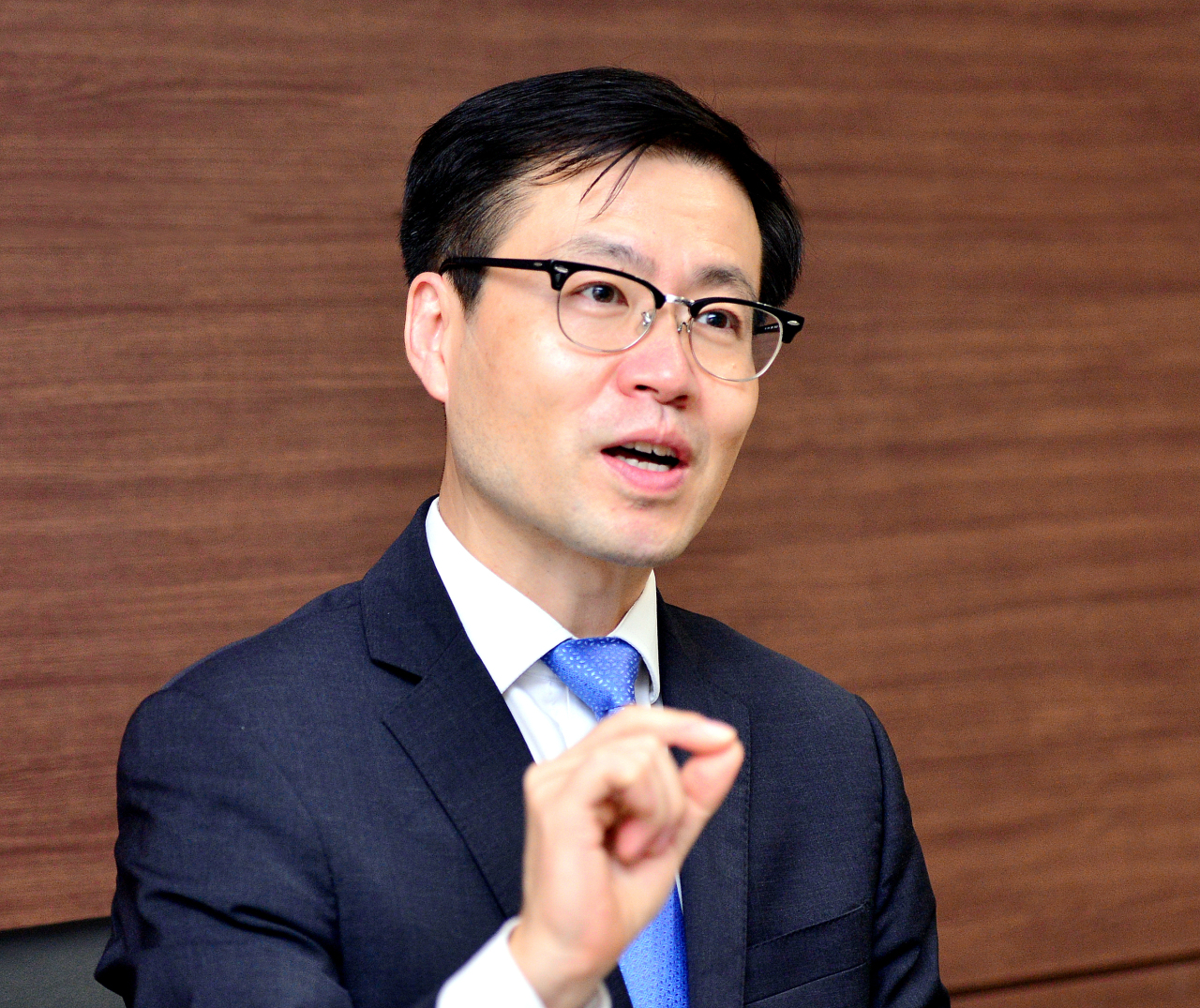 South Korean Trade Minister Yeo Han-koo speaks during an interview with The Korea Herald at his office in Seoul on Sept. 10. (Park Hyun-koo/The Korea Herald)
When Yeo Han-koo, South Korea’s newly minted trade minister, first joined the officialdom in the early 1990s as a trade relations official, his country was just struggling to catch up with an emerging international trade order that later gave birth to the World Trade Organization.

The path ahead, however, looks fraught with challenges, as the world of trade is shifting again.

“We are at a turning point where the paradigm of trade as we know it is changing,” Yeo said in his office in Seoul on Friday, as he described the world he has to navigate through -- one shaped by trade wars, the rise of protectionism, supply-chain disruptions and a weakened WTO.

In the past, the focal point for Korea was market openings, he said.

Through free trade agreements -- many of them bilateral -- the government helped local businesses reach new markets, propping up the main locomotive of economic growth: exports.

“The mantra of efficiency and cost-effectiveness (which ruled in the era of globalization) is being replaced by new values like resilience and sustainability,” the minister said. At the same time, trade is increasingly intertwined with issues like the pandemic crisis, national security and climate change.

All this calls for a new strategy, Yeo stressed. A more pragmatic approach that goes beyond the conventional boundaries of offshore trade so that it brings “direct, real” contributions to the people of Korea, like jobs and vaccines.

“It should be for the Main Street,” he added, drawing a comparison to the Wall Street versus Main Street argument in the US.

To further explain his idea, the Korean official also spoke about his US counterpart Katherine Tai and the role she played in resolving the trade secret theft dispute between two Korean battery makers in April, both of whom have or plan to have factories in the US and partnerships with American electric vehicle producers.

Calling the settlement between LG and SK “a big win for American workers, the environment and the US’ competitive future,” the US trade representative said it was the type of trade policy she believes in.

As the topic moved to vaccines, the minister’s idea became more clear.

In May, Presidents Moon Jae-in and Joe Biden agreed on a Korea-US vaccine partnership, which Yeo helped shape behind the scenes as a presidential secretary.

“The US has the technology and Korea has the production capacity. If two nations work together, utilizing each other’s strengths, vaccine production can be scaled up significantly and make global contributions,” he said.

When asked about hopes here that the partnership agreement could lead to a grand deal that would give local drug manufacturers access to the intellectual property of US-developed COVID-19 vaccines, he spoke of the importance of taking small steps.

“There is a global shortage of raw and auxiliary materials for the shots, because supplies can’t keep up with the pace of vaccine production,” Yeo said. “In Korea, there are relatively unknown small and mid-sized companies that can manufacture quality products.”

By linking them with US vaccine makers or bringing in promising foreign vaccine companies here, his team could make real contributions to Korea’s global vaccine hub vision and bolster the local industries, he explained.

As for supply chains, Yeo’s emphasis on resilience is in part a lesson learned from Korea’s ongoing trade conflict with Japan.

In 2019, Japan imposed a de facto export ban on key chemical materials used to make computer chips, display panels and other high-tech products, in an apparent retaliation over South Korean court rulings on Japan’s wartime use of forced labor in Korea, then its colony. This became a wake-up call for Korea, and the country has made localization and diversification efforts ever since.

“Trade and national security issues are now mixed together. If supply chains in the past prioritized commercial efficiency, now, the focus is on resilience and stability. This is why we need to diversify (our supply sources and markets),” Yeo said, adding that the country’s high-flying export figures for ICT products, undeterred by years of the Japanese curbs, is proof that the country has taken the right path and that Japan has taken a wrong one.

Speaking of trade wars, which undermine the bedrock of global trading rules, nondiscrimination, Yeo called for the restoration of multilateralism, for which Korea is willing to lead the global dialogue.

“Korea used to passively defend its interests whenever trade issues arose. But now, Korea has become a major global player. It’s time to lead the dialogue and exert leadership by engaging in issues though they aren’t strictly about Korea,” Yeo said.

Yeo mentioned the Regional Comprehensive Economic Partnership as the latest example of Korea’s trade leadership. During negotiations, Korea offered new ideas and helped members to resolve issues they had been stuck on.

Inked in November, the RCEP created the world’s largest trading bloc that accounts for one-third of the world’s gross product, participated by 15 nations, including Korea, China, Japan, Australia and New Zealand.

Yeo further added that Korea has made “considerable progress” in its study of the Comprehensive and Progressive Agreement for Trans-Pacific Partnership. He noted that Korea’s entry is perceived as beneficial to the country as well as the trading bloc. Yet, since the US’ participation, if realized, could change things greatly, he hinted that they are in no hurry.

The CPTPP, launched in 2018, is another mega trade pact in the Asia Pacific, combining 11 economies and some 500 million consumers. It was based on the Trans-Pacific Partnership, which fell apart after years of negotiations when the US, under President Donald Trump, exited before its ratification. Now, the Biden administration is considering joining the trading bloc, and so is China.

Korea could also take up a leadership role in global rule-setting process for newly emerging technologies and industries, the minister added, giving digital trade as an example.

As the country’s chief negotiator, he hopes to see his country taking a more prominent place in the newly emerging world order.

“When I was a kid, I lived in a developing nation. When I was a teenager, I lived in an industrialized nation. Now, I’m living in a prosperous advanced nation. There’s no country in the world like Korea that went such dramatic changes in a short period of time,” Yeo said.

“If my predecessors’ missions were economic development and democratization, mine is to further develop Korea into a nation that others can look up to at this critical juncture of changing trade paradigm.”