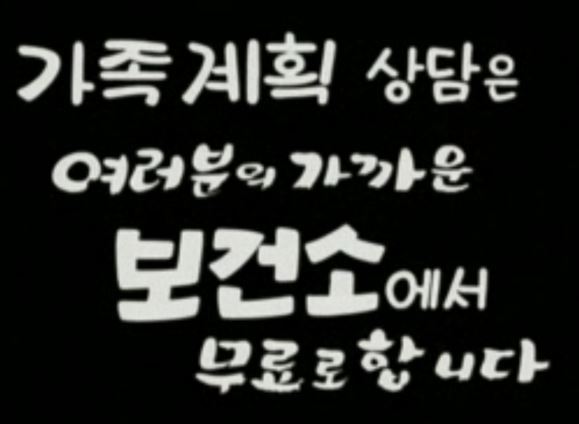 A screen capture from a government-produced video in 1964 promotes using birth control and urges families to consult community health centers over the matter. (National Archives of Korea)
SEJONG -- The number of family members per household reached a record low of 2.21 in South Korea in August, amid the rapidly growing tally for single-person households and all-time low birthrates among couples in their 20s and 30s.

This contrasted with an average of 2.44 people per family in August 2016 and 2.54 in August 2011, data from the Ministry of Interior of Safety showed.

The demographic change is particularly apparent in the data for four-member households, which was the nation’s typical family size between the 1970s and 1990s. But their percentage has shrunk significantly over the past decade.

The number of four-member households posted 3.41 million last month, an all-time low of 14.6 percent of the total 23.33 million households across the country.

The portion of four-member households had been 18.7 percent five years earlier and 21.1 percent a decade earlier, according to the Interior Ministry. 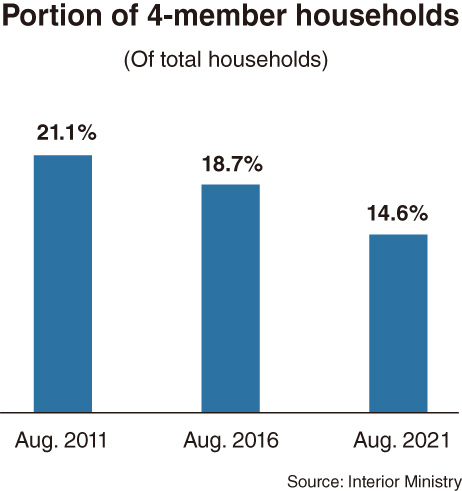 Likewise, large families of five-member households or more continued to decline over the corresponding period.

In contrast, the combined portion of single-person, two-member and three-member households exceeded the 80 percent mark this year, the first time since the nation started compiling the relevant figures.

A noteworthy point is the surge in the number of single-person households in the wake of falling marriage rates, rising divorce rates, and a sharp increase in the number of seniors residing alone due to the gap in life span between men and women, with women living longer.

The number of single-person households recorded 6.64 million in August 2011, accounting for 33.2 percent of all households.

Among the nation’s eight major cities, Seoul recorded the highest portion of one-member households. The tally for single-person households in the capital came to 1.88 million last month, which was 42.6 percent of the total 4.41 million households.

A government official said that the growth of single households in Seoul “is attributed to the unmarried young generation in their 20s and 30s working or studying in Seoul amid low marriage rates and fertility rates.”

Daejeon ranked second with 40.6 percent, Busan was third with 39.3 percent, followed by Gwangju with 39.2 percent, Daegu at 37.4 percent and Incheon with 37.2 percent.

Alongside Seoul, these five metropolitan cities are seeing a growing portion of those in the younger generation who are reluctant to get married in the wake of high unemployment rates and other uncertainties involving spiraling apartment prices.

But figures for Ulsan and Sejong fell far short of the nationwide average (39.9 percent), staying at 34.6 percent and 34.4 percent, respectively.

The manufacturing-oriented Ulsan and Sejong, the nation’s administrative center, have a low portion of older residents and relatively high portion of married couples in their 30s and 40s.

Among the nine major provinces, South Jeolla Province topped the list with 45.4 percent in one-member households. Gangwon Province placed No. 2 with 43.6 percent and North Gyeongsang Province, No. 3 with 43.3 percent.

These three regions also made up the top three among the 17 regions of Korea, which include the eight major cities.