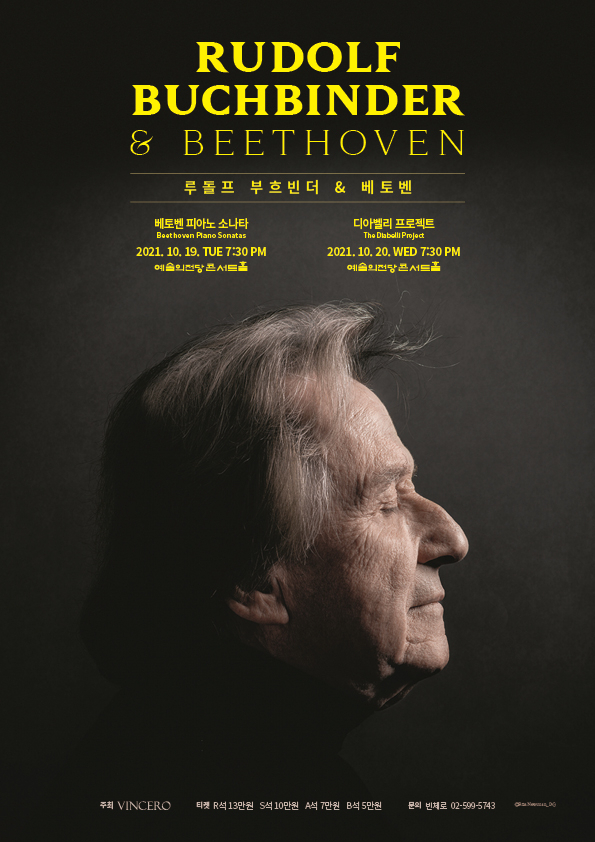 The upcoming recital marks the concert pianist’s first visit to Korea since 2019. He was to come to Korea with his Beethoven Sonata program last year but the engagement was canceled due to the prolonged pandemic crisis.

Buchbinder, 74, will go onstage at the Seoul Arts Center on Oct. 19, presenting five Beethoven sonata pieces, including No. 8 “Pathetique,” No. 14 “Moonlight” and No. 21 “Waldstein.”

On the next day, the pianist will take the stage at the same venue, presenting the repertoire from his “The Diabelli Project” recording released under the classical music label Deutsche Grammophon in 2020.

The recording, celebrating the 250th anniversary of Beethoven’s birth, features old and new takes on the Diabelli Variations, featuring Anton’s Diabelli Waltz in C Major and Beethoven’s 33 Variations on a Waltz by Anton Diabelli in C Major, Op. 120.

It also features new interpretations on the Diabelli Variations. One of them being New Variations on a Waltz by Anton Diabelli (2020) written by 11 contemporary music composers that were selected by Buchbinder, which includes Toshio Hosokawa and Tan Dun. Another is Variations on a Waltz by Anton Diabelli (1824) that was written by eight composers who lived in the same times as Beethoven, such as Johann Nepomuk Hummel, Franz Liszt, Franz Schubert and Carl Czerny.

In addition to the Seoul recitals, Buchbinder will go onstage in Daejeon on Oct. 21 with the piano sonata recital and in Daegu on Oct. 24 with “The Diabelli Project” recital.