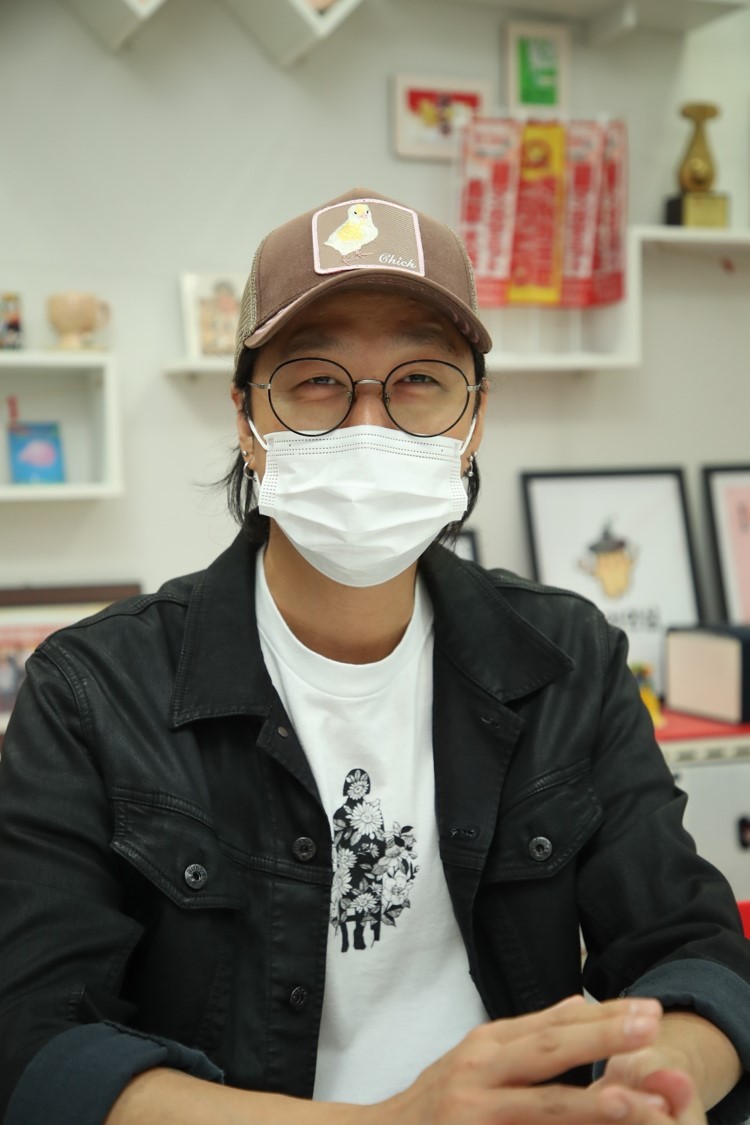 Hun, co-creator of “Navillera,” speaks during an interview at the KOMACON headquarters in Bucheon, Gyeonggi Province, Sept. 5. (KOMACON)
The story may be heartwarming and sweet, but its creators were driven by ferocious determination, according to Hun, co-author of the webtoon series “Navillera.”

“I know it sounds weird, but I think Jimmy and I have been possessed by something to finish our webtoon ‘Navillera.’ I don’t think we can create a work with such an effort ever again,” Hun said.

Written by Hun and illustrated by Jimmy, “Navillera” is a South Korean webtoon about a 70-year-old man who pursues his lifelong dream of learning ballet while suffering from Alzheimer’s disease. Praised for its unusual characters and subject matter, the comic has been adapted into a musical and is now a drama series premiering globally on Netflix. “Navillera” won the 2021 Bucheon Manhwa Award on Saturday at the 24th Bucheon International Comics Festival.

“After ending my previous work, ‘Secretly Greatly,’ I started to sketch the storyline for ‘Navillera’ and that was in 2011. At the time, I remember approaching the webtoon very seriously. I did not want to create an exciting, sensational or provocative comic,” Hun explained during an interview with The Korea Herald on Sunday afternoon.

Hun wanted to create a comic that was neither commercial nor easily consumed. He thought his next piece needed a specific message. After the rough outline for “Navillera” was finished, Hun recognized that the scale of the work was too big for just one person, leading him to search for a partner. 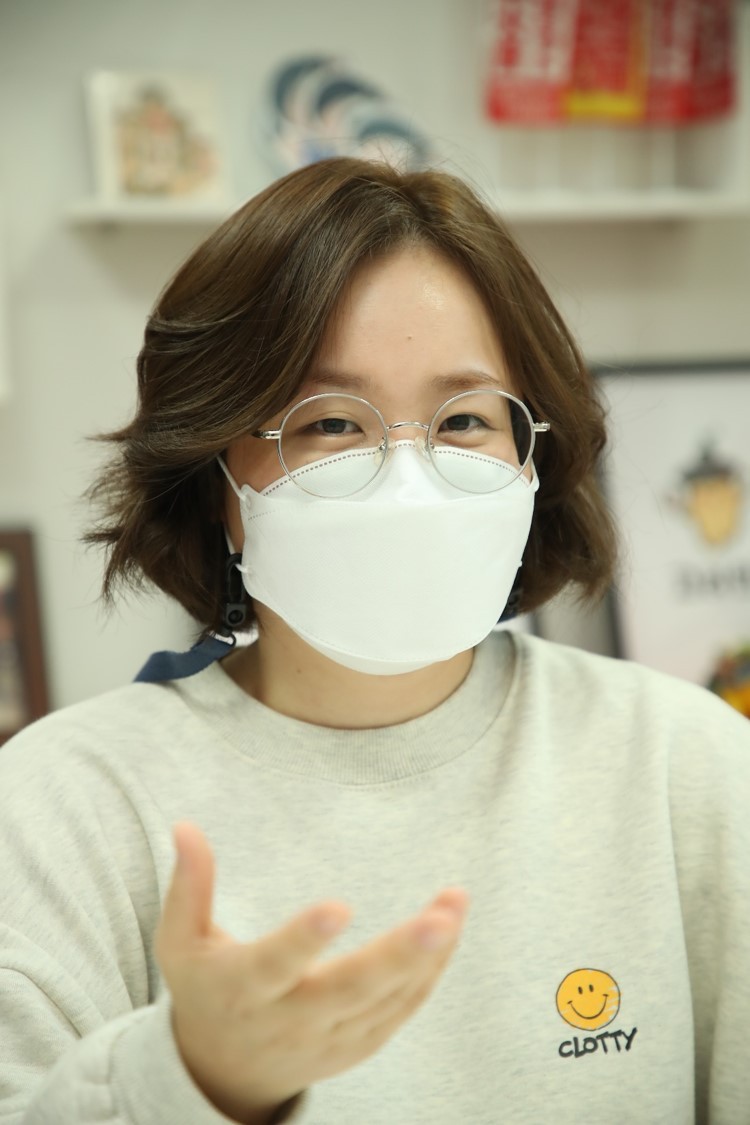 Jimmy, co-creator and illustrator of “Navillera,” speaks during an interview at the KOMACON headquarters in Bucheon, Gyeonggi Province, Sept. 5. (KOMACON)
“I was a little shocked when I first heard about ‘Navillera,’ because I was an author mainly drawing action scenes in Korean and Japanese comics,” Jimmy said.

“Though I was not accustomed to drawing quiet, slow scenes or ballet, I guess Hun’s passion and repetitive requests won over my heart,” she joked.

When asked how she felt about the drama series that “Navillera” inspired, she expressed mixed emotions.

“I was really satisfied with the cast and how my work was presented in a dramatic format, but I was a little bit sad to see that the individual stories of the Mun Gyoungguk Ballet Company’s dancers were left out. Other than that, everything was wonderful. I believe some of the changes in the drama had different meaning and offered a chance to see our work from another angle. I also enjoyed the drama,” Jimmy told The Korea Herald.

The authors were surprised when their comic gained global readers’ attention.

“I heard that ‘Navillera,’ for instance, is popular in Japan, China, Taiwan, Thailand and France. Our work is translated into different languages and loved by foreign readers. Though I am done with the work, it is amazing to see how ‘Navillera’ is reborn into different forms and remembered by people,” Jimmy said.

With the storylines reflecting Korean culture so strongly, Hun never expected the international attention he ended up getting. He supposes that the story -- about family, dreams, young people and the elderly -- is universal and that’s why readers can relate to the characters. 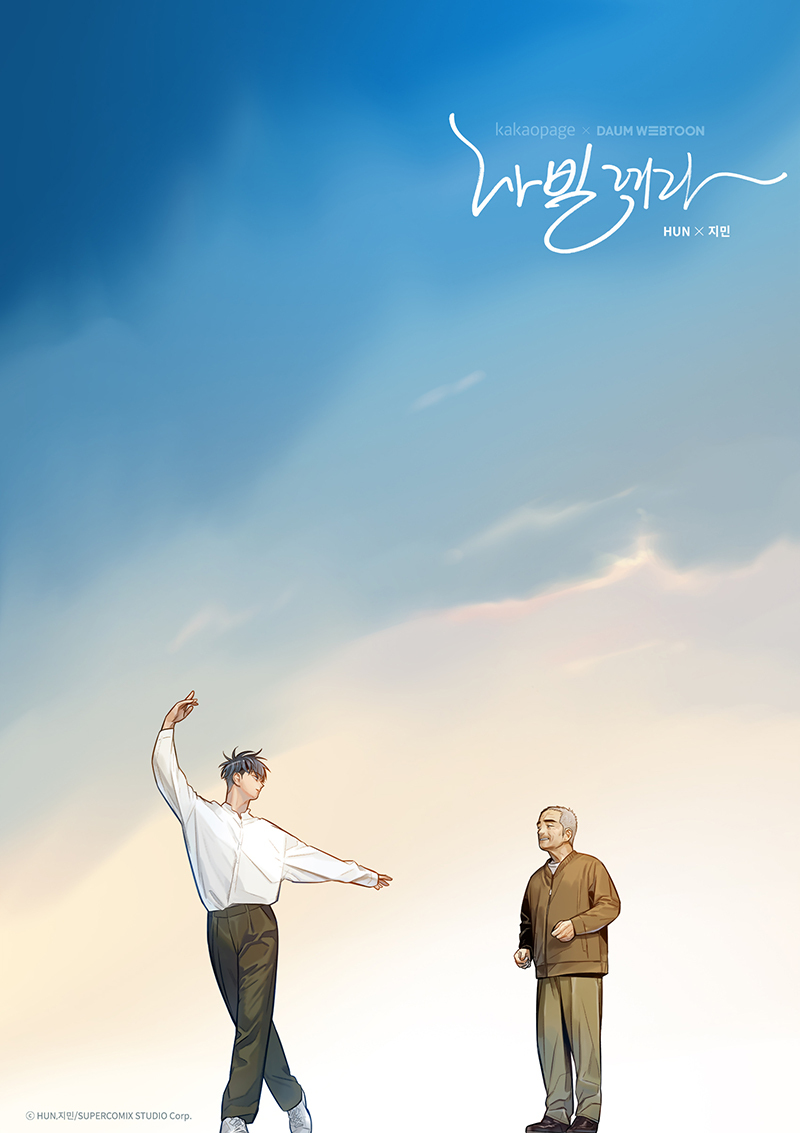 “Navillera” (BICOF)
The author hopes to repay the fans’ support.

“Having a grandfather as a lead character and a story about ballet were difficult challenges, going against the popular trend of the webtoon industry. I am grateful for the fans who understood and shared similar emotions with me and Jimmy. We will try our utmost to present interesting and meaningful comics,” Hun said.