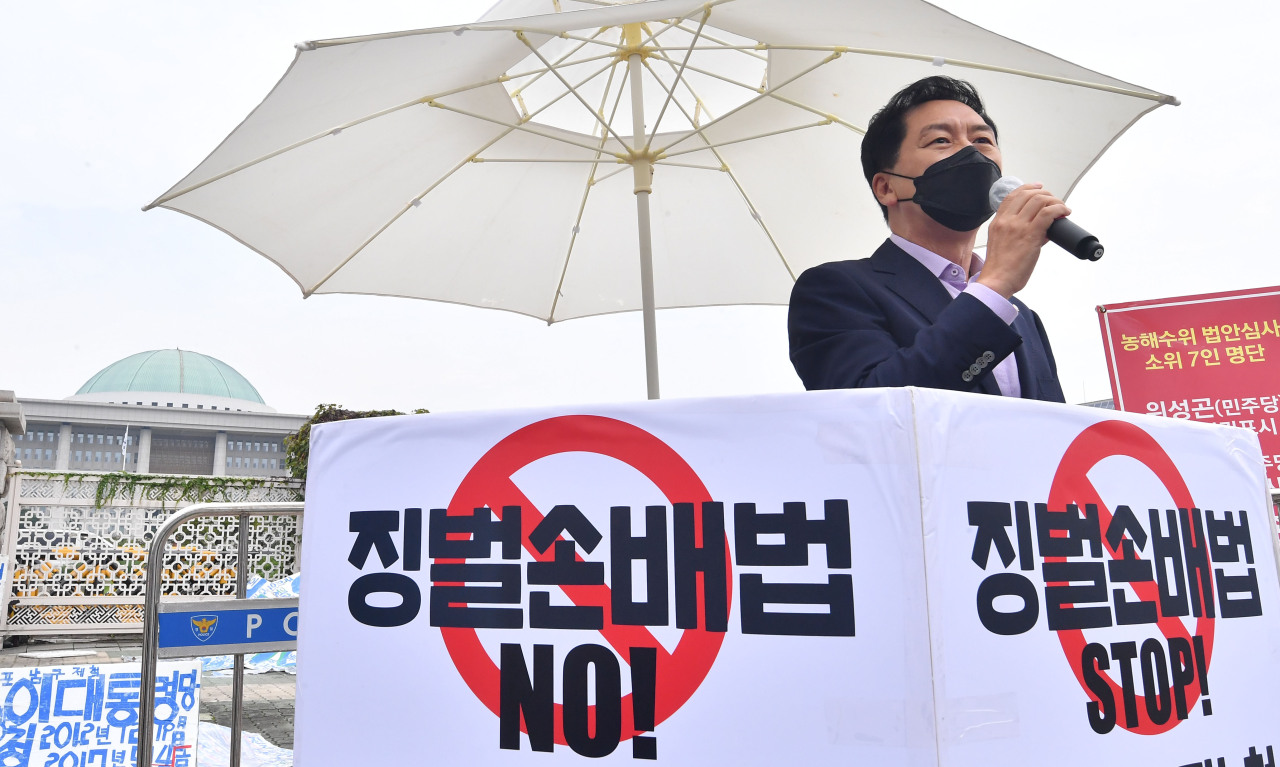 Rep. Kim Gi-hyeon, floor leader of the main opposition People Power Party, speaks Monday during a protest event against "fake news" bill pushed by the ruling Democratic Party of Korea. (Yonhap)
Lawmakers on Monday continued to debate the timing of a final vote on a bill on penalizing the press for “fake news,” with fierce opposition from those outside the ruling party likely pushing the date back.

In face of fierce protest from the media and opposition lawmakers, the ruling Democratic Party of Korea was debating within its members whether to walk back from its plan to push the bill through the National Assembly within this month’s provisional session.

The bill has faced severe criticism, with opinions divided even within the ruling party. The proposal was originally expected to pass the final vote without much hassle, as the Democratic Party controls about 60 percent of the National Assembly’s 300 seats, but the atmosphere around it has changed.

The proposed revision to the Act on Press Arbitration and Remedies, Etc. for Damages Caused by Press Reports was drafted, according to ruling party officials, to protect the public from misinformation and malicious press reports. But it was criticized for its potential to silence criticism of the ruling party and the government ahead of elections next year.

A growing number of global media organizations issued statements and expressed concerns over the bill, saying the revision could undermine the hard-won freedom of the press enshrined in the Constitution of South Korea and damage the democratic values of the country.

They are concerned that Korea could lose its highly rated guarantee of freedom for journalists, which has helped the country stay democratic and respectful of individual rights.

Ruling party officials were scheduled to convene with their counterparts from the main opposition People Power Party at 4 p.m. Monday ahead of a plenary session starting an hour later. By Sunday, the ruling bloc’s plan was to reinstate their will to put the bill up for a vote, but it is becoming more likely that the vote will be pushed back to September.

The presidential office also reportedly expressed concerns of pushing too hard for the bill to be passed this month, spreading beliefs within the ruling party it would be more beneficial to vote on the bill on later date rather than do it now and suffer a loss of public support.

Moreover, People Power Party officials have warned they will run a filibuster until Tuesday’s end if the media bill is listed for a vote at the plenary session. The provisional parliamentary session ends at midnight on Tuesday.

“If put up for a vote today, the People Power Party will carry out legal and political challenges in every future steps on top of launching a filibuster with a non-stop discussion on the Assembly floor,” said Rep. Kim Gi-hyeon, floor leader for the main opposition party in a statement Monday.

People Power Party also announced plans to file a complaint with the Constitutional Court against the ruling party’s unilateral passage of the bill through committees. The bill passed two committees within the National Assembly solely with votes for the revision from ruling bloc lawmakers.