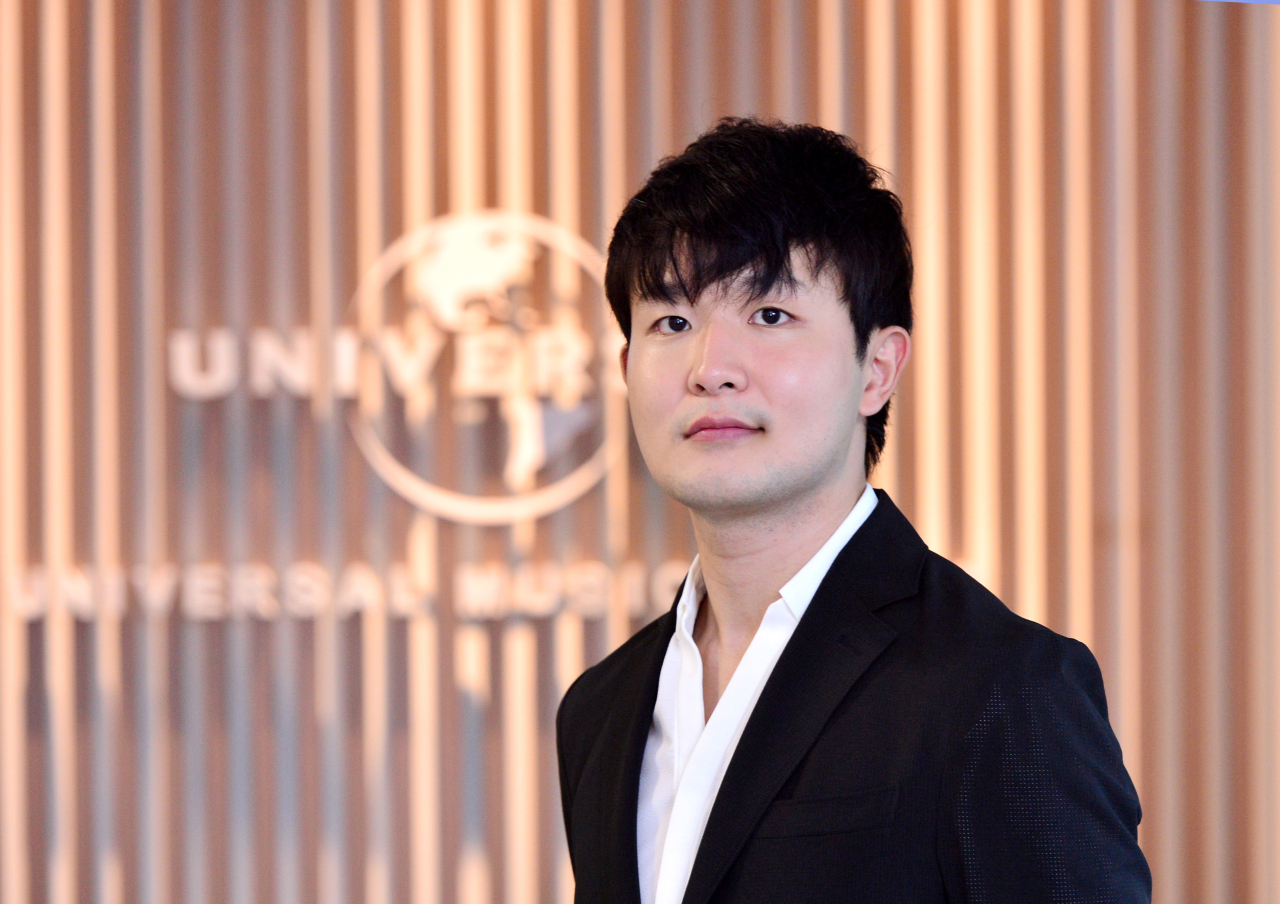 “I was going through the same mental stages as other people,” said Sunwoo Yekwon in an interview with The Korea Herald on Aug. 17 at the Universal Music office in Seoul.

“In the beginning, I was quite hopeful, hoping that things will get better soon,” he said, recalling the first few months of the COVID-19 pandemic. He had just returned in March to Berlin, Germany, where he lives, after a month in San Francisco. Like many people, the hopeful feeling that that it would soon be over gave way to despair as the months dragged on.

“After a few months, I started feeling devastated and depressed,” he said. His engagements were being postponed or canceled.

The past 18 months or so have been an emotional up-and-down for Sunwoo. But eventually he tried to refocus on things he had been doing in the past. “To keep these fresh thoughts for the music, to remind myself how much I love music, listening and playing in front of the public. I tried to think as if I was reborn,” he said.

“I don’t know what the meaning is -- being back to normal,” Sunwoo said, noting that things are still not normal, and while he is grateful for the opportunities to perform in front of an audience, as limited as they are, he hopes things will get better next year.

Even in these unusual times, Sunwoo proceeded with recording his first studio album since winning the first prize at the prestigious Van Cliburn International Piano Competition in 2017, becoming the first Korean to win the Cliburn Gold.

The first possible date for recording was in April, when he found himself having to practice for the Mozart album as well as a Mozart concerto and a Shostakovich concerto. When the concerts were canceled, he decided to focus on the Mozart album, but a recording date could not be fixed with the ongoing pandemic situation. After looking at May and June, it was in early August that Sunwoo’s Mozart album of two CDs, totaling 130 minutes in duration, was recorded over five days.

The album, issued under the Decca label, was released in November, followed by recital tours in Korea. Stage performances have been taking place erratically, with events liable to be postponed or canceled at the last minute depending on the waxing and waning of the pandemic and social distancing guidelines that change accordingly.

Although the pandemic has wreaked havoc on people’s lives in general and taken away many opportunities to take to the stage for the pianist, Sunwoo does not have anything to put in the minus column in his accounting of the pandemic times.

“Even if I feel really depressed, I somehow try not to think about the past and about the downside. Also, when I feel happy about certain things I try not to stay in that state of mood for a long time and just move on to the next project, the next thing that is coming up,” he said, adding it does not mean that he does not go back over his performance. 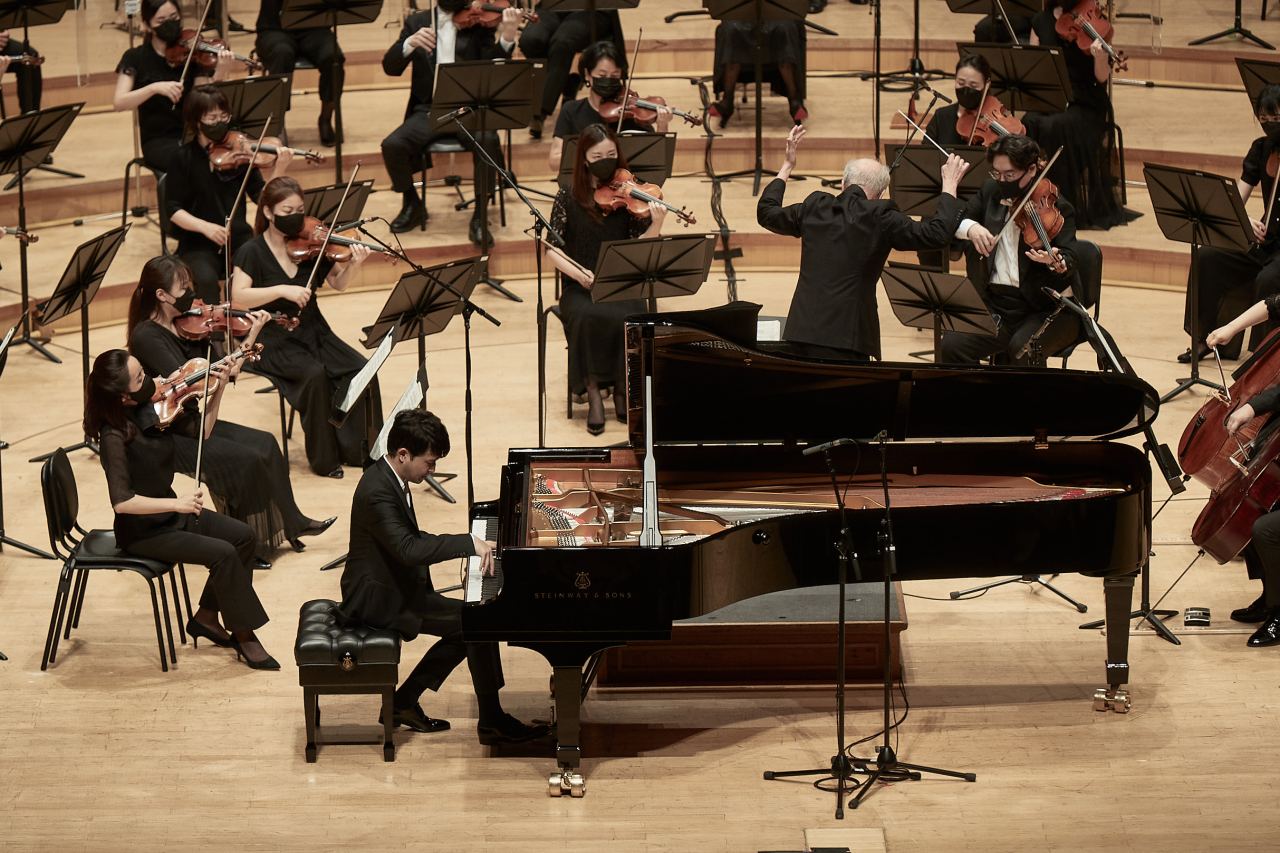 Pianist Sunwoo Yekwon performs with the Seoul Philharmonic Orchestra led by Osmo Vanska at the Lotte Concert Hall in Seoul on Aug. 13. (Lotte Concert Hall)
Unsure if he had anything to put in the minus column, he talked about what he found to be positive about the pandemic experience.

Reminding himself of his feelings when he started playing the piano at 8 and when he left for the US to study at 15 is something he would put in the plus column. He has become even more determined in his thinking that “music is the only thing that makes me stronger and makes me satisfied with myself mentally and emotionally,” he said.

In the beginning of the pandemic, Sunwoo was grateful that he had more time for himself -- not having to think about time difference or dealing with jetlag. But that was only for a few weeks, he said.

But soon, the pianist and the music fan in him took over. He became grateful for the time to go deeper into the music, being able to take longer to explore details of a score. “To have that time, that special time, I was grateful for that,” he said.

In losing opportunities to perform to an audience, Sunwoo became even more grateful for concerts and came to miss them even more. “To have live concerts and to share the emotions with people is something we sometimes take for granted. But it is not something that can be described in words,” he said.

“Although there are many people around you listening to the same concert, I feel you are there to go through your personal, emotional journey and that time is only there even though it feels timeless. It only happens at that moment and you cannot feel that emotional depth anywhere else, I believe,” he added.

He returned to live concerts at the end of December when he went on a recital tour with a Mozart and Chopin program in Korea. “It is difficult to describe the feelings I was having,” he said.

Sitting at the bench in front of the piano and feeling the air and the vibe from the people, Sunwoo said it was precious to be back on the stage. “I felt like I’d be happy if I died after the concert.”

Back home, or a hotel room as the case may be, after a concert, Sunwoo wants even more of it, to get back on the stage again, such is his passion for music. “I wish I could be back on the stage immediately,” he said with a chuckle. “It is a challenging job but to be on the stage, to be sharing emotions, it is a privilege. So, whatever challenges I have to go through, it does not matter,” he said.

“It is to die for. It is the only thing that makes me feel completely satisfied.”

Online concerts are very different, according to Sunwoo, who has done a few online concerts with orchestras and solo performances. Online concerts, which quickly emerged as an alternative to in-person concerts in the last year and a half, have their fans and their detractors, and while some fans may appreciate the online performances, the pianist says it feels “really distant.”

During the lockdown, other than occupying himself with music, he played some mobile games, read, did more cooking at home -- he is quite good at pasta -- and hung out with people, carefully, Sunwoo said.

I bring to his attention an Instagram post in which he is playing the piano part as well as the orchestral part of a concerto on a split screen. I suggest he might have been really bored to have taken this up. “I had concert opportunities that were canceled and I was really missing it,” he said about why he attempted such a feat. Apparently, it was not an easy task at all, doing it by himself at home.

“I was playing around with it,” he said with a chuckle.

“Life is short and I love classical music. Even if I die after 80, I would feel it is not enough time to hear all the repertoire. Only thing that is clear is that classical music is the only thing that I feel such emotional connection with,” he said, adding, “I have a lot of programs in my head.”

Could he recommend a piece to listen to in these troubled times?

He first suggests a piece from his album, Mozart Rondo in A minor. He then follows it up with Brahms Intermezzo Op. 118, No. 2.

I listen to the two pieces driving home. Both are sublimely comforting, albeit in different ways.