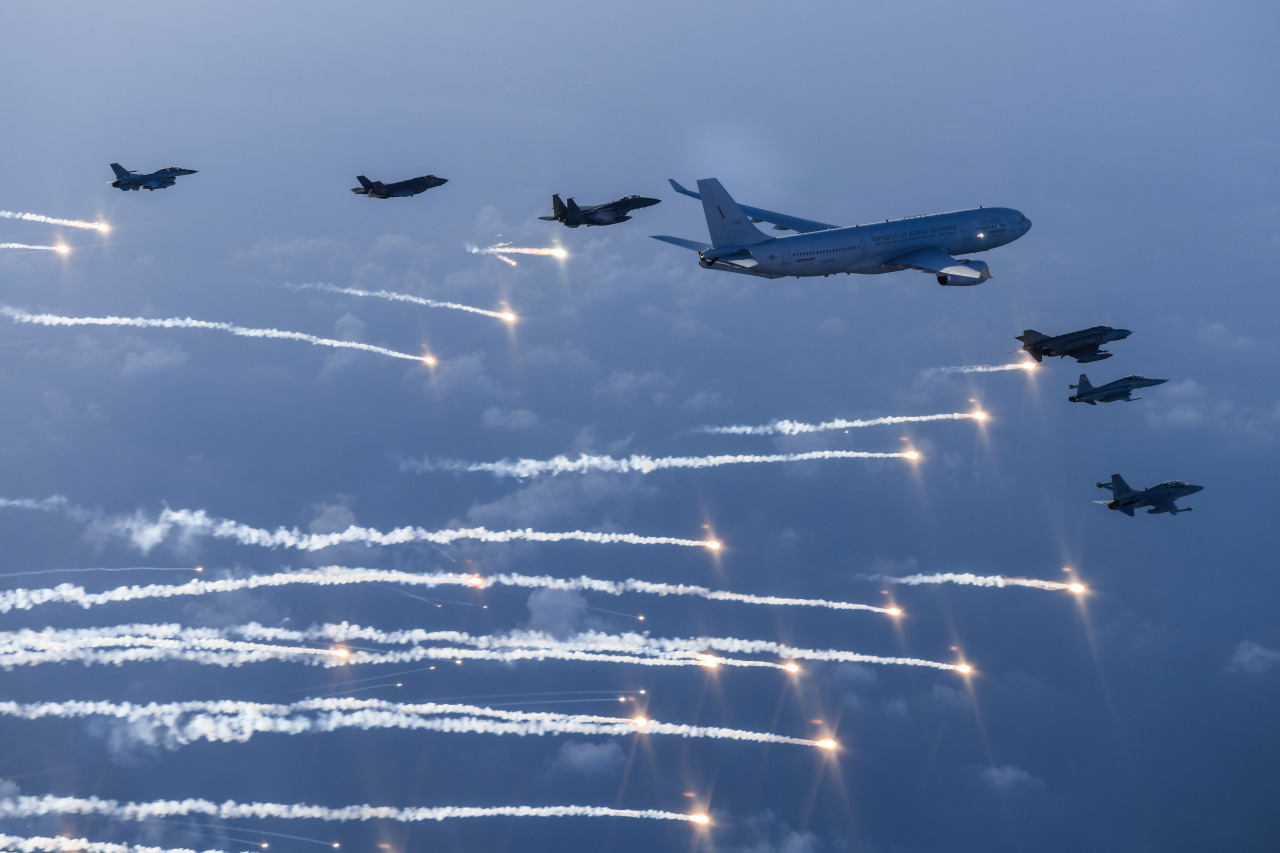 A military transporter carrying the remains of the late Gen. Hong Beom-do enters South Korean airspace Sunday, as fighter jets fire flares to welcome his return from Kazakhstan, where he died in 1943. (Ministry of Patriots and Veterans Affairs)
Hong Beom-do, a highly revered independence fighter against the Japanese occupation of Korea, was laid to rest at home Wednesday, 78 years after his death in Kazakhstan. The previous day, President Moon Jae-in posthumously awarded him the highest national order of merit.

At a burial ceremony held at Daejeon National Cemetery, Moon called Hong a war hero and the commander-in-chief of the Korean Liberation Army, whose return he said “gives hope to South Koreans working together to find their way out of the pandemic crisis.”

Moon highlighted the hardship Hong and many South Koreans had to endure during Japan’s 1940-45 colonial rule, saying, “The first step for us not to repeat that is we make sure our freedom fighters and their families get what they deserve.”

Gen. Hong is known for the Battle of Bongodong in June 1920, when he led the Korean Liberation Army to score its first major victory against the Japanese forces in Manchuria. At least 157 Japanese soldiers were killed and 200 were injured. The victory emboldened the poorly equipped KLA.

The KLA recorded its biggest victory against the Japanese forces four months later in October 1920 near the region, where Hong jointly led the Battle of Cheongsanri. The Korean militia dealt the hardest blow to the Japanese armed forces, though Japan disputes the claim to this day. 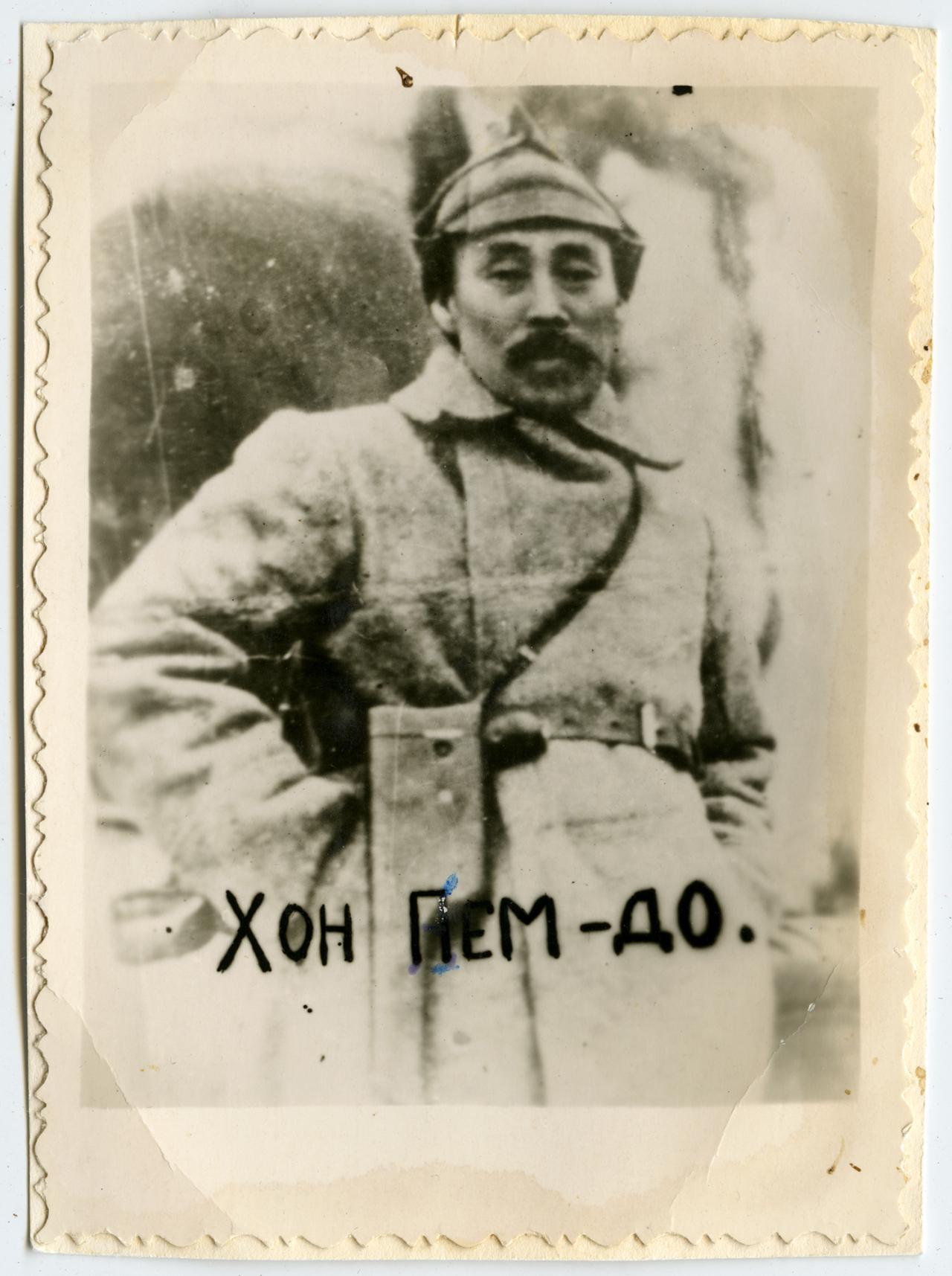 A photo of Hong Beom-do taking part in the 1922 Congress of Peoples of the Far East in Moscow. (Yonhap)
“The two battles represent a history of triumph and hope that average people made,” Moon said, describing Hong as a motivator who instilled self-respect and self-determination in every Korean at the time.

But in 1937, Hong was forced to move to Kazakhstan, along with fellow Koreans living in Manchuria as the Soviet Union sought to push them out of the region where it was dealing with an increasingly belligerent Japan.

Hong settled in Kyzylorda, a southern city in the Central Asian country, and died there in 1943, just two years before Korea’s independence.

It was North Korea who first asked Kazakhstan to repatriate Hong’s remains in 1993. But Korean communities there refused to hand them over. Meanwhile in 1994, South Korea reached a tentative pact with the Kazakh government to bring back the remains. But it took decades for the deal to go through.

“Bringing back remains isn’t one-way, top-down. We’ve had to engage people and the government there. The Korean communities in particular needed time to think through our proposal that Hong would be best remembered with his remains here,” an official at the Ministry of Patriots and Veterans Affairs said.

The official said Moon’s state visit to Kazakhstan in 2019 helped to avert a bureaucratic slowdown, though the remains arrived here a year later than South Korea had hoped because of the coronavirus pandemic. The government had planned to mark the 100th anniversary of the 1920 battles Hong led with his remains. 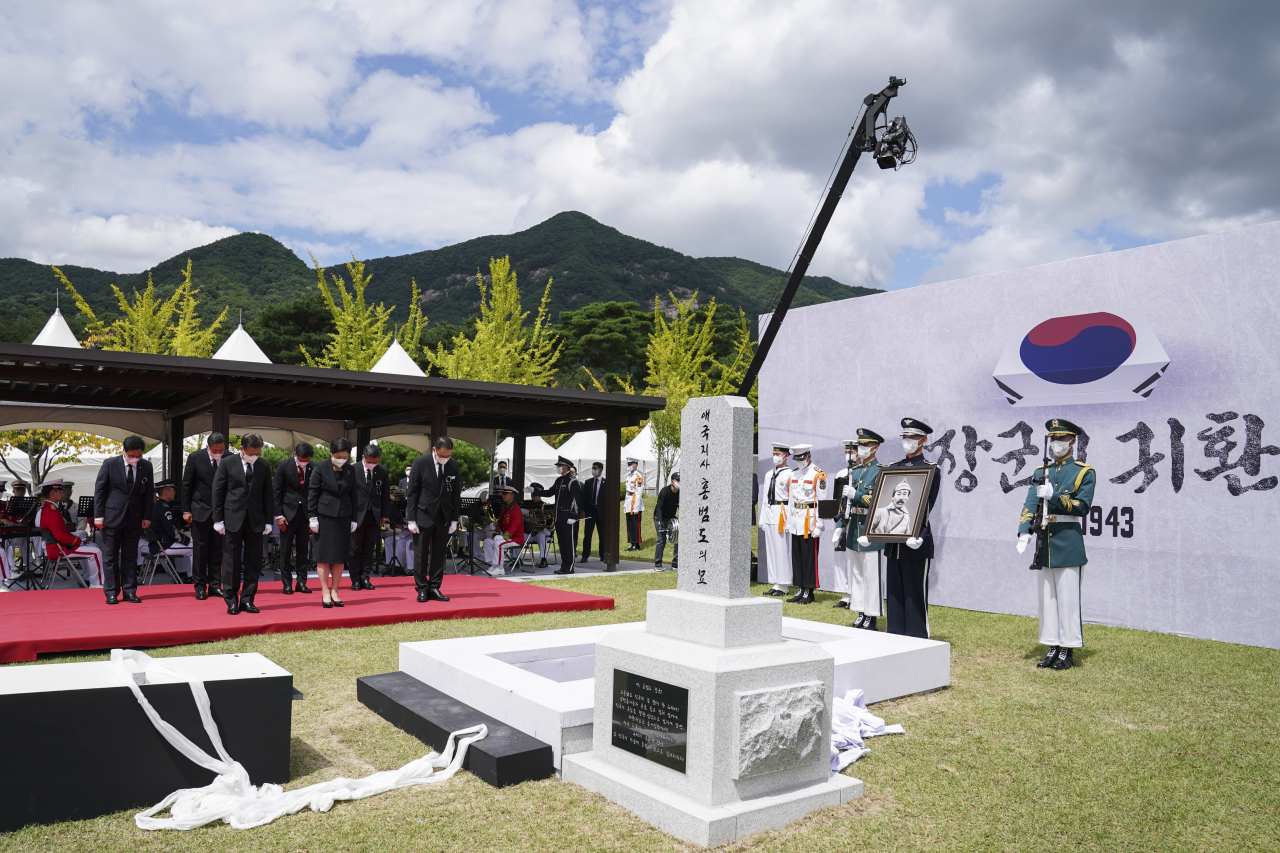 Moon was emphatic that he would make sure independence fighters and their families get what they deserve. But those given the promise say the government has to and could do more to recognize what they did for their country when it was ripped apart in pieces.

“Few freedom fighters and their families have a financially stable life. The government could certainly do better with its benefits,” said Nam Joo-woo, a grandson of an independence fighter who heads a regional branch of Heritage of Korean Independence, the only freedom fighter group the government funds.

Freedom fighters receive an average of 3 to 4 million won or $2,500 to 3,400 a month, while their families get a little more than one-third of that. This year, the average Korean worker earns a minimum wage of around $1,500 a month.

And the paycheck goes to only three family members: a spouse, a son or daughter and a grandchild of the fighters’ choice. There is room for change, said Nam, 64, who asked media for help in getting the message out in the open because veterans cannot press the issue too hard.

“That makes everything look like there is a price tag for what we did. We just want a decent recognition of our service, for us and for next generations who should be able to believe their government will look after them if they risk their lives to support it,” Nam said.

A senior veterans affairs official, however, said the veterans have a stronger safety net, because they can ask for a cheaper loan, better terms on a house they buy and preferential treatment on college and job applications. “There is more to it than just the monthly paycheck if you look at the big picture,” he said.

Foreign fighters only half recognized

Seventy-two foreign fighters worked for Korea’s independence, along with 16,932 Korean fighters, but they have been denied their share of benefits, said Kim Dong-jin, chairman of the Hulbert Memorial Society in Korea. The group was named after American missionary Homer Bezaleel Hulbert who had helped with independence efforts.

Foreign fighters have all been awarded the order of merit but are left out of the monthly pension service because they are not Korean nationals. The veterans affairs ministry said their nationality is important because the service involves dispensing taxpayer money.

“That’s just ridiculous. Why do we put a distinction between the foreign fighters and Korean fighters? They equally risked their lives. And we’re already spending taxpayer money on foreign refugees coming here. Are we saying foreign fighters deserve less?” Kim said. Others also share the same sentiment.

Nam Young-woo, who completed his 21-month mandatory military service, said he believes the government should treat the foreign fighters alike, noting, “Anyone in good conscience would hardly object to extending the same benefits.”

A veterans affairs ministry official said he also saw the upside but said the ministry would need social consensus to revamp the pension service.

“We still have many independence fighters who have not been fully honored for what they had done for this country, who have been overshadowed,” President Moon said.