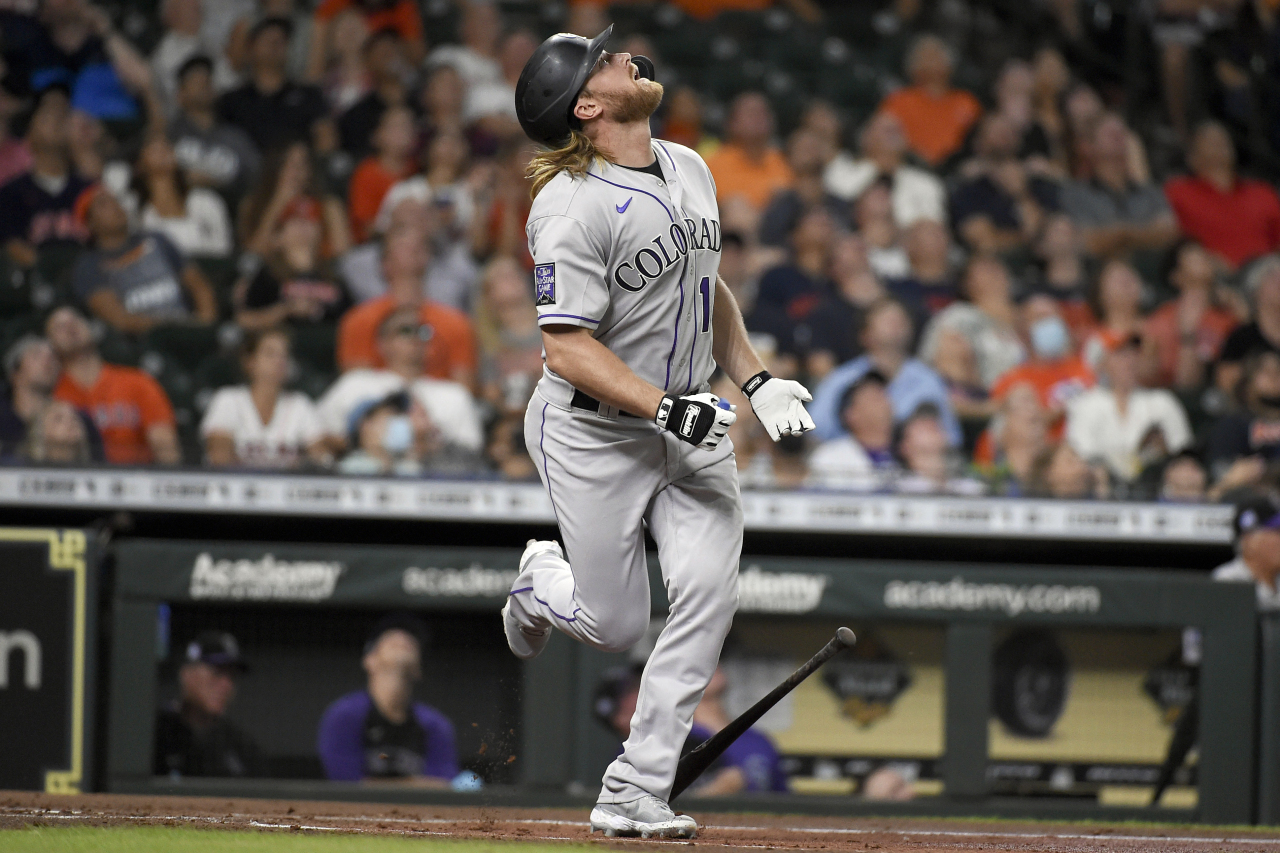 In this Associated Press photo, Taylor Motter of the Colorado Rockies hits a pop fly during the top of the second inning a Major League Baseball regular season game against the Houston Astros at Minute Maid Park in Houston on Aug. 10, 2021. (Yonhap)
There isn't a precise measure to compare the overall talent level of South Korean professional baseball to that of the majors. But big league scouts and other front office types familiar with the Korea Baseball Organization
(KBO) would tell you the Korean league falls somewhere between Triple-A and Double-A ball stateside.

By some crude math, then, it stands to reason that one-time big leaguers who didn't pan out in the KBO would have little, if any, chance of returning to Major League Baseball (MLB).

However, three players in August alone have thrown that equation out the window, as they have found their ways back to The Show after subpar stints in the KBO in 2020.

First, it was former Kiwoom Heroes infielder Taylor Motter getting called up from Triple-A by the Colorado Rockies on Aug. 10.

Then ex-NC Dinos right-hander Mike Wright returned to the big league mound with the Chicago White Sox on Tuesday.

And for their road game against the Cincinnati Reds on Wednesday, the Chicago Cubs called up former Lotte Giants pitcher Adrian Sampson from Triple-A for a spot starting duty.

In the recent past, a couple of KBO MVPs, Eric Thames (2015) and Josh Lindblom (2019), have gone back to the majors. Former Doosan Bears right-hander Chris Flexen signed a two-year deal with the Seattle Mariners in December. They enjoyed strong campaigns in the KBO that warranted interest from big league clubs.

Considering his dismal showing in the KBO last year, Motter's path back to the majors has been quite improbable. The 31-year-old lasted only 10 games with the Heroes and batted just .114/.135/.200 with a home run and three RBIs in 35 at-bats.

But Motter has since reinvented himself in America. He has added some 40 pounds to his frame, and he tore up Triple-A pitching to the tune of a .335/.460/.759 line with 24 home runs and 57 RBIs in 67 games for the Albuquerque Isotopes. Motter's previous career high in home runs in the minors was 16 in 119 Double-A games in 2014.

Motter's start against the Houston Astros on Aug. 10 was his first big league game since July 2018 with the Minnesota Twins.

Motter played all over the field in the minors this year -- every position except center field, catcher and pitcher -- and has had a couple of games at third base for the Rockies while mostly coming off the bench to pinch hit. He's batting 1-for-12 in eight games so far.

"Being that utility guy who you're not afraid to put in to hit at any time, it's huge," Motter told MLB.com in a recent interview.

"That's one thing that I prided myself this offseason was to be that hitter, (someone) that you can use at any position."

Colorado manager Bud Black said Motter "has found something that has clicked for him" and that he will get a long look on the rebuilding club.

"We'll see how long this goes and the at-bats he puts up,"

Black said. "We'll play him in the field and see whether this is a guy we need to consider over the wintertime as part of our organization. We're looking for performers. We're looking for guys to help us win. He's going to get his opportunity."

Wright threw two shutout innings for the White Sox to close out their 9-0 win over the Oakland Athletics on Tuesday. The 31-year-old hadn't pitched in the majors since June 2019 with the Seattle Mariners.

Wright spent 2020 with the NC Dinos in the KBO, and went 11-9 with a 4.68 ERA in 29 starts. He pitched twice in the Korean Series, where the Dinos beat the Doosan Bears in six games for their first ever championship.

Wright didn't get another start but came on in relief in the deciding Game 6, allowing a run in one inning of work in a 4-2 Dinos win.

Wright wasn't brought back for the 2021 season and returned to the US. He signed with the White Sox on Christmas Eve last year and made 16 starts for their Triple-A affiliate, Charlotte Knights, going 7-5 with a 3.40 ERA, along with 90 strikeouts in 95 innings.

"He's got a good, veteran presence to him," White Sox manager Tony La Russa said of Wright. "He has a fastball that he can pitch to both sides of the plate and up. He's got some off-speed pitches, a nice changeup and a good slider, and he's been pitching regularly. There will be no hesitation to use him where we need innings."

The White Sox are running away with the American League (AL) Central division title at 71-50. After winning a championship in Korea last year, Wright may be in for another postseason run in 2021.

On Wednesday in Cincinnati, Sampson scattered five hits in four innings of one-run ball. He struck out two but served up a solo home run to Tyler Naquin in the second inning.

It was his first major league outing since September 2019 with the Texas Rangers.

Sampson missed the beginning of the 2020 KBO season with the Giants while spending time with his family in the US. His father, David, passed away in early May, just before the start of the regular season. Sampson pitched in spring training in April but after returning to South Korea, he had to serve his mandatory 14-day quarantine. Sampson only made his KBO debut in the final week of May and went through a roller coaster ride all season long, with strong starts often followed by rocky outings.

These minor league numbers don't scream "major leagues" and Sampson may not be around very long. The Cubs needed a starter on this particular day with Jake Arrieta released and Adbert Alzolay on the injured list.

On the other hand, the Cubs are going nowhere this year. They have waved their white flag by trading away key pieces from their

2016 World Series squad, such as Kris Bryant, Anthony Rizzo and Javy Baez. Sampson just might stick around for a couple more starts.

"The last month or so, starting out in Iowa, things have been going really well for me. I am pitching great. I am going deep into games down there. That was the goal as soon as I got up here,"

Sampson said of his callup. "I am feeling good with everything. We're being asked, 'What kind of role do we want to play in this organization going forward?' So it's ours for the taking. If you want it, you have to go get it. That's my thought process. I really want this job and I am going to do everything I can to be successful."

Before the trio, another familiar name for KBO fans resurfaced in the majors this year. Former Hanwha Eagles outfielder Jared Hoying had a two-game cup of coffee with the Toronto Blue Jays in June -- for his first major league action in four years -- and then returned to the KBO by signing with the KT Wiz later the same month. (Yonhap)