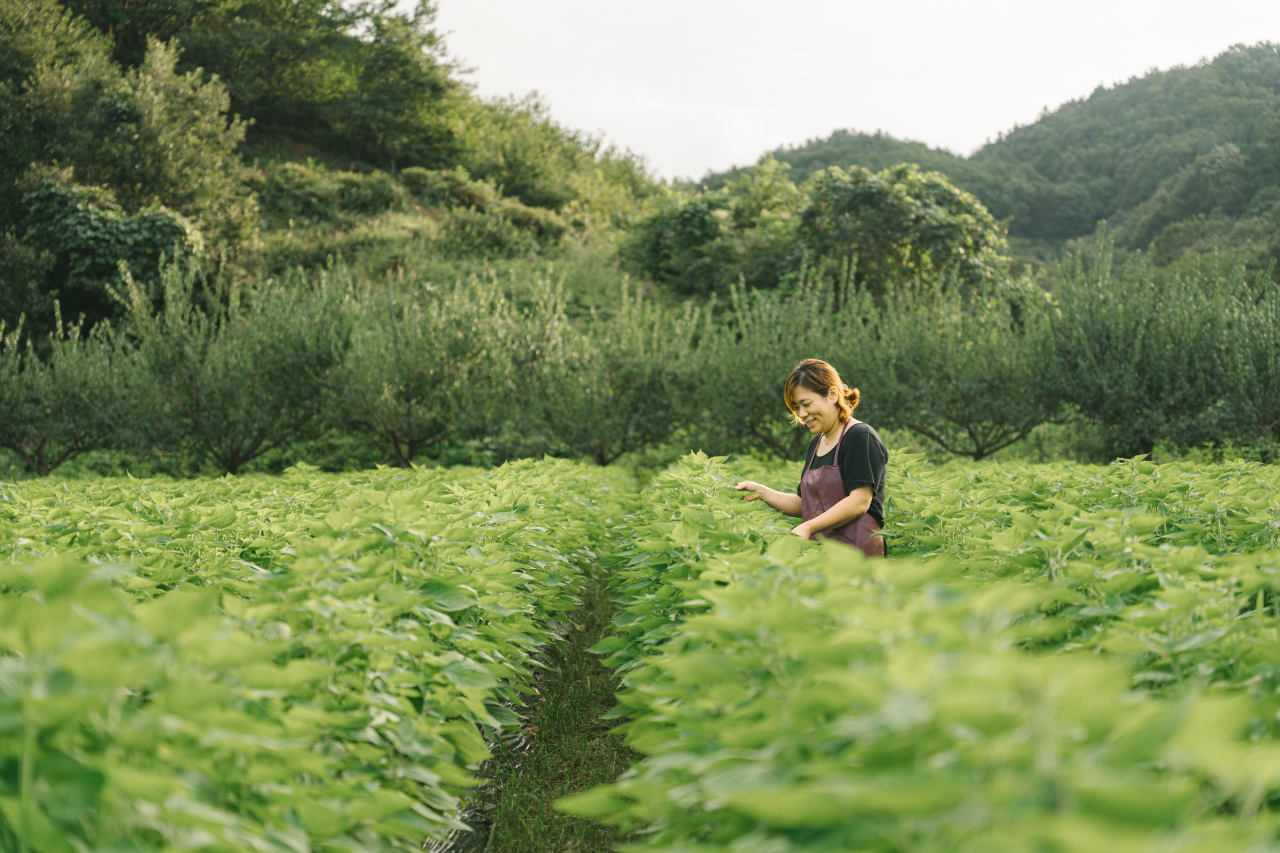 The traditional oil adds a layer of nutty, aromatic warmth to bibimbap and namul, Korean vegetable dishes, and is known for its high content of omega-3, omega-6 and omega-9 fatty acids, which help support a healthy immune system.

For schoolteacher-turned-CEO Chung Jung-eun, it was the health benefits of the omega-3 fatty acids present in perilla seeds that played a huge role in her decision to harvest perilla and produce fresh perilla oil from its seeds. 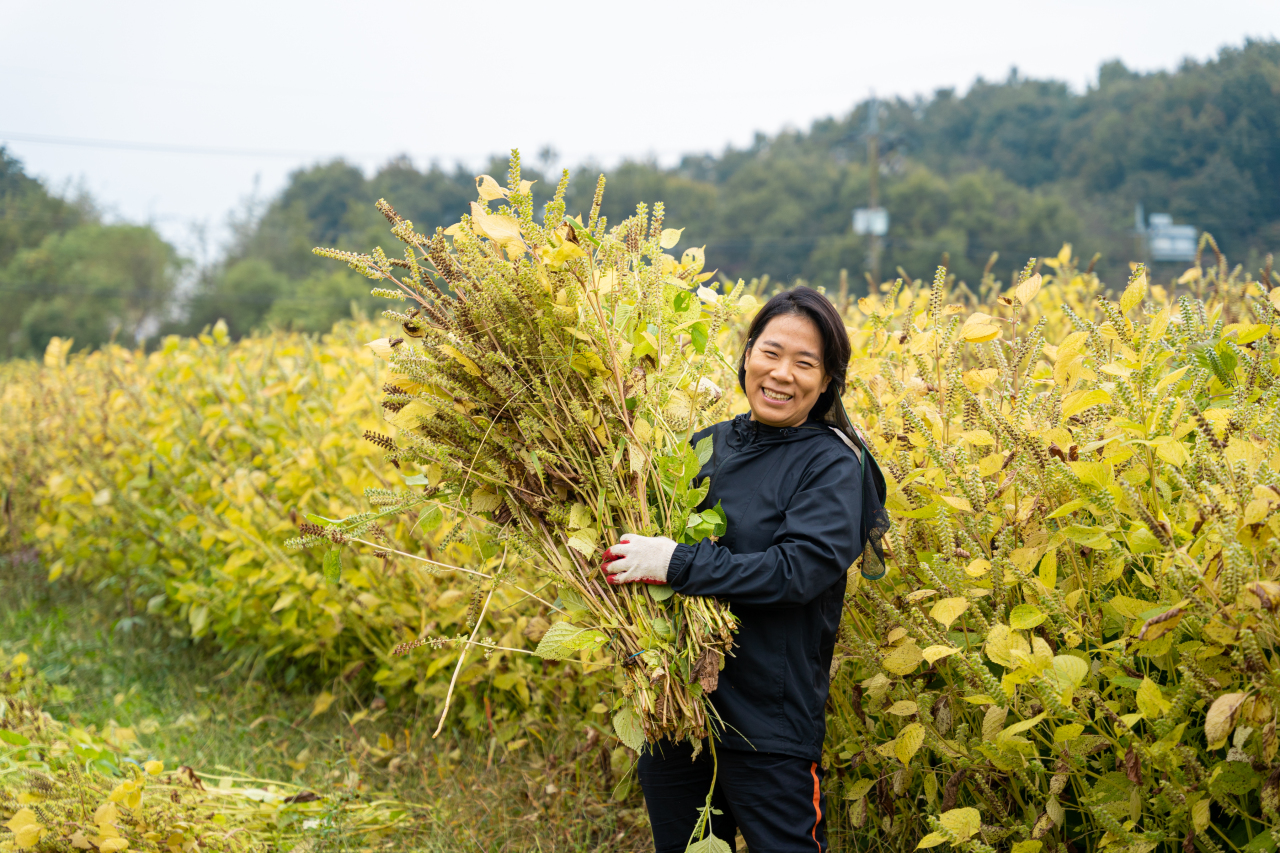 In 2010, Jirisan Cheorum Farming Association Corporation CEO Chung Jung-eum started a perilla and sesame farm in Namwon, North Jeolla Province. (Photo credit: Jirisan Cheorum)
Before jumping into farming, Chung started off by learning how to farm at an agricultural technology center in 2009.

Then in 2010, she started a perilla and sesame farm in her husband’s birthplace, Namwon, North Jeolla Province.

Chung explained that the decision came from a personal realization that she wanted to leave the city and do something in the countryside that she felt would be meaningful.

Before she started her own farm, Chung was living in Seoul.

She had left her job as a schoolteacher to focus on raising her family while her husband was working very hard to run a small business.

Witnessing how draining all this was for her husband, she decided it was time for a change.

“I did not look back and dived in,” Chung, 46, recalled in an e-mail interview. 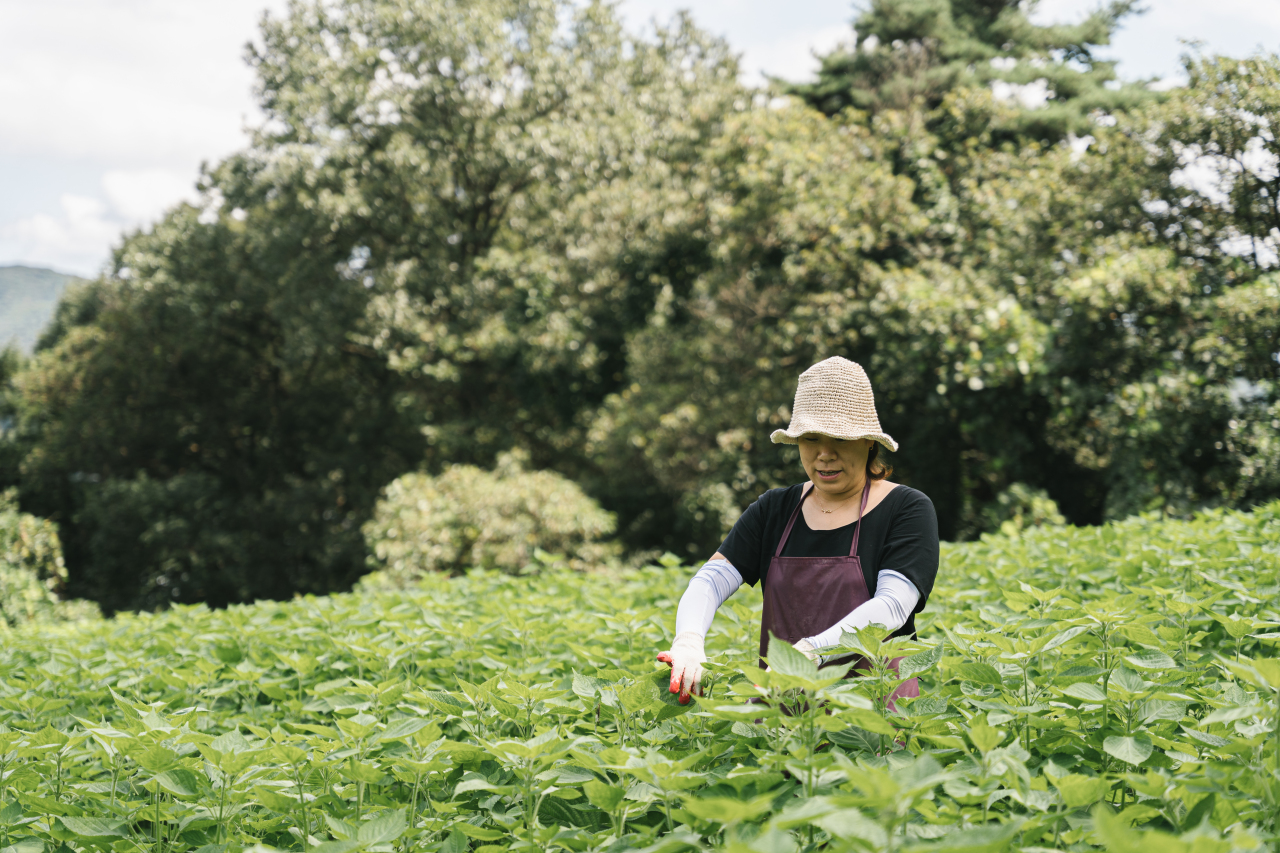 From the beginning, Chung not only sold roasted sesame and perilla oils. She also sold fresh perilla oil.

“From the get go I wanted to produce an oil that retained its original flavor even if that meant it was a bit more mild tasting,” Chung said.

Her solution was to use as little heat as possible in producing her perilla oil and she distinguished this oil from her other oils by calling it “fresh.”

Chung considered both air-drying the perilla seeds naturally as well as using a dryer to dry the seeds but felt there may be hygiene issues with natural drying and that using a dryer might leave the seeds exposed to the dryer’s heat for too long.

She turned to roasting as briefly and at as low a temperature as possible as her solution. 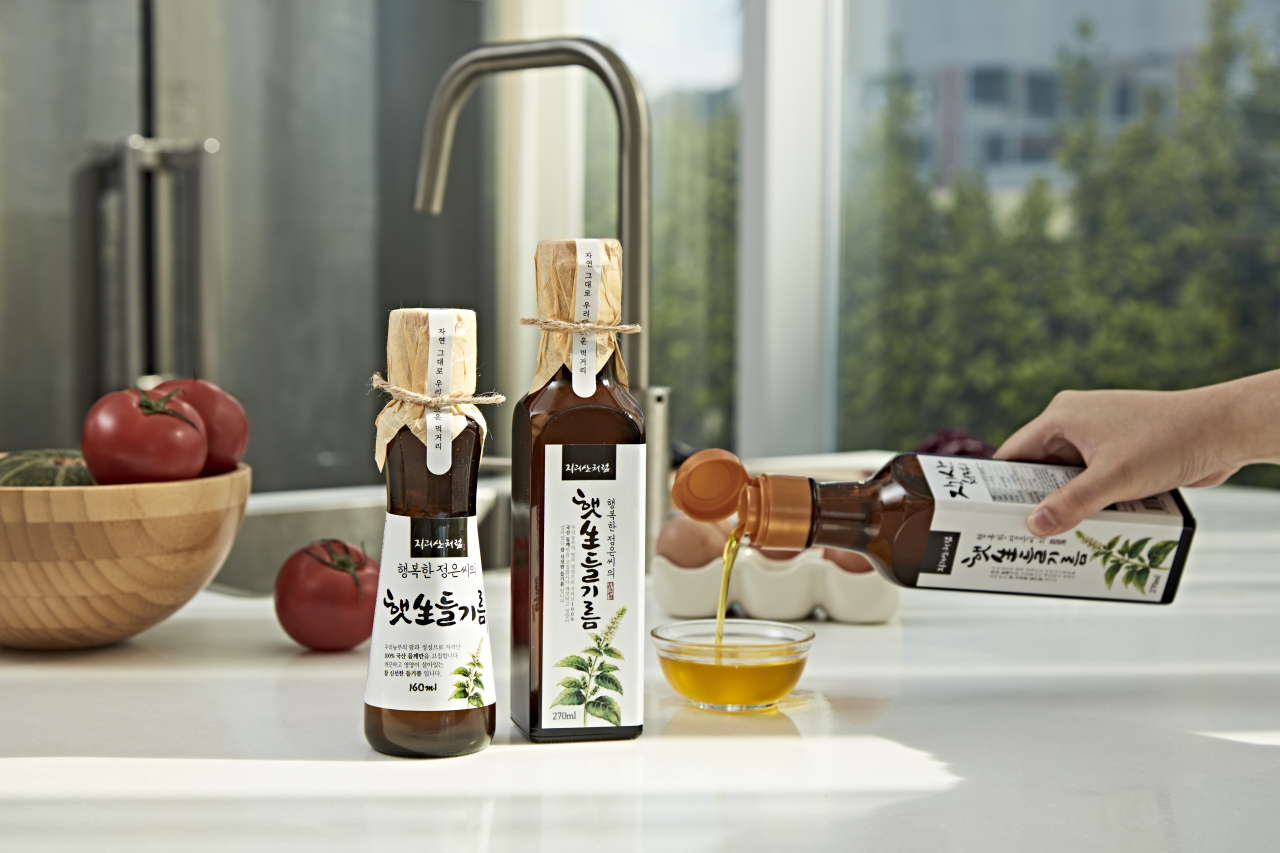 A taste of Chung’s fresh perilla oil unveils a very delicate, nutty, fragrant flavor profile with a satiny mouthfeel and a light golden hue (Photo credit: Jirisan Cheorum)
“For our fresh perilla oil, we wash the perilla seeds, drain them and then roast the seeds just to the point where the moisture has been removed,” said Chung, explaining that one cannot extract oil if the seeds retain moisture.

“Then we extract the oil by using an expeller press so the oil is extracted solely from the pressure applied to the seeds.”

To keep her oil as fresh as possible, Chung says the oil is expeller-pressed after an order has been received.

“When I first started out, fresh perilla oil was such a novelty that some thought that the oil had been diluted with another oil and that was why it was yellow in color,” Chung said.

While one can now find a diverse selection of fresh perilla oils, both cold-pressed and expeller-pressed, and some people even seek out fresh perilla oil because they believe less nutrition is lost in the lower temperature production process, that was not the case for Chung when she started over nine years ago.

Chung recalls how in the beginning some customers found the fresh perilla oil to be too mild tasting, but instead of changing her oil, she steadily continued to produce her fresh version alongside her toasted versions.

Her unwavering dedication paid off.

Chung still remembers the moment when her oil started to gain notice.

“In 2014, we were featured in a television show,” Chung recalled. “At that time, the viewer ratings were very high and we were getting orders by phone well into the evening.”

Now, one can also find Chung’s fresh perilla oil at other online sites like SSG.com.

Due to the increased demand for her seeds and oil, Chung not only continues to farm her own perilla and sesame with her team, she says she also sources from other farms. 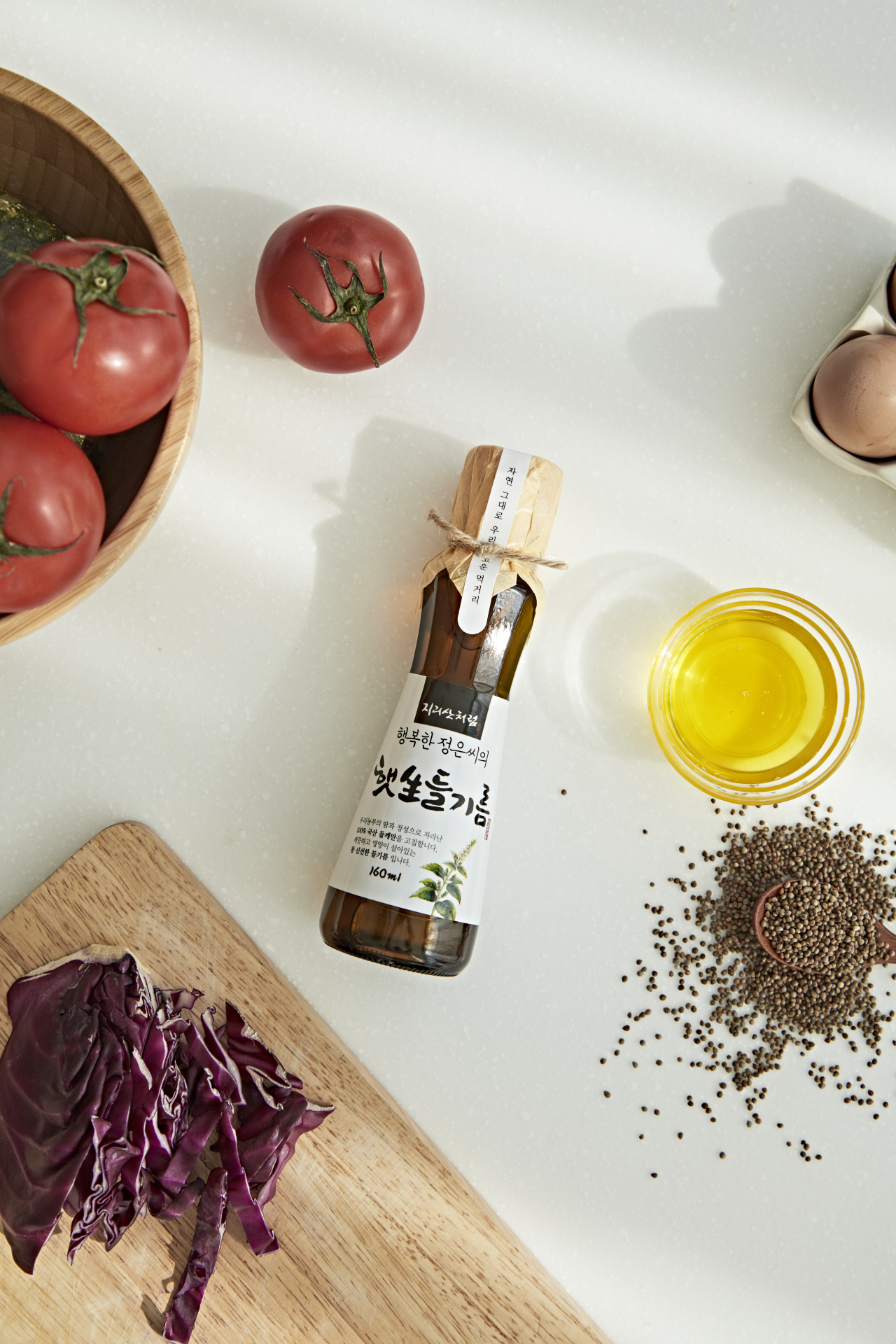 A taste of Chung’s fresh perilla oil unveils a very delicate, nutty, fragrant flavor profile with a satiny mouthfeel and a light golden hue (Photo credit: Jirisan Cheorum)
So what does her oil taste like?

As perilla oil oxidizes more easily than sesame oil, Chung recommends consuming her fresh perilla oil within six months after opening the bottle if stored in the refrigerator.