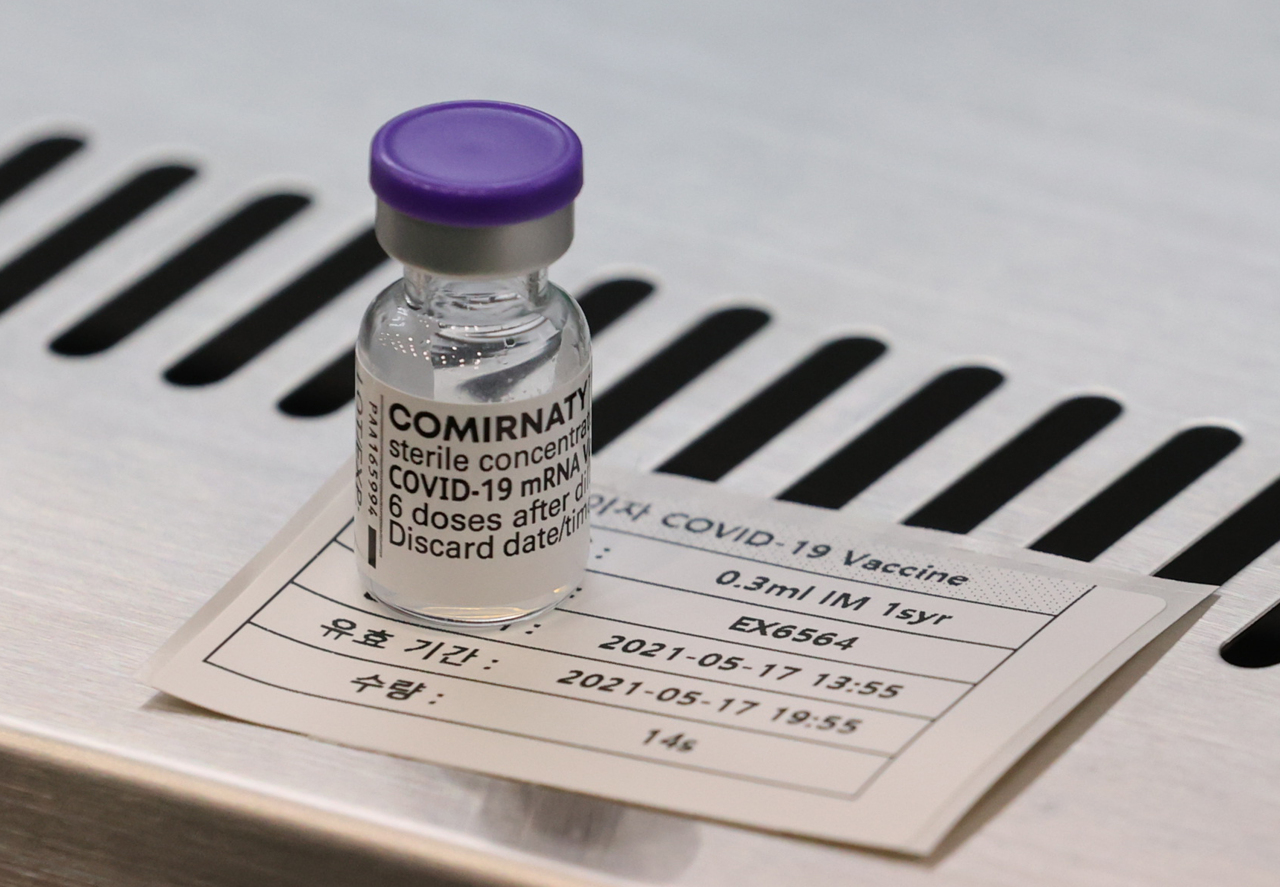 A vial of Pfizer`s COVID-19 vaccine is seen in the photo. (Yonhap)

Korean health officials said Tuesday they have reached a deal with Israel to receive their offer of 700,000 doses of Pfizer’s COVID-19 vaccine that are due to expire shortly, in exchange for a fresh batch of the same number at a later date.

The Pfizer vaccines sent from Israel will arrive here Wednesday morning, to be used immediately, according to a Ministry of Health and Welfare statement.

“The Israeli government was looking to exchange its surplus Pfizer supply, and Korea is equipped with the health care capacity and infrastructure to deliver the doses in time before their July 31 expiration date,” the statement said.

The Korea Disease Control and Prevention Agency’s commissioner Jeong Eun-kyeong said the soon-to-expire vaccine doses from Israel were “believed to be without defects or quality issues” in response to media inquiries during a briefing held the same day.

“These doses are from the same batch being used in Israel this month, and from what we have gathered the vaccines have been kept in good condition per the cold chain requirements under minus 70 degrees Celsius,” she said. “Korea’s drug regulator will inspect the vaccines before they can be administered here.”

Asked if the Pfizer vaccines Israel was supplying Korea with are the ones rejected by Palestine earlier for being too close to the expiration date, Jeong said they were not the same ones. The agency’s communications officials later issued a correction, retracting Jeong’s reply.

The agency is unable to confirm the matter as it “concerns diplomatic relations,” it said in a message to reporters hours later. “The Korean government is not in the position to comment,” it read.

The swap deal with Israel comes as Korea’s vaccine rollout is once again in the doldrums, with first-dose vaccinations coming to a full stop for the second time over the weekend. Zero first doses were administered Sunday, after a week of only 5,600 or so doses handed out per day to first-time recipients.

Since its vaccination campaign launched in late February, Korea vaccinated 30 percent of its 51 million people with at least one dose of a vaccine. Currently, 10 percent of the entire population are fully vaccinated.

Kwon Deok-cheol, the minister of health and welfare, told a government COVID-19 response meeting that Korea was “at a dangerous crossroads,” warning that “a grave crisis may be ahead.”

The trends in key metrics show Korea’s COVID-19 situation is worsening, according to reports from the ministry and the KDCA.

Friday saw the biggest one-day rise in new cases since the final stretch of the winter wave in early January at 826. For the last seven days, the number of new cases logged each day has averaged 761, up 154 from the same time a month ago.

This week’s R value, which represents how many secondary infections are generated per case on average, was 1.2 nationwide and slightly higher for Seoul at 1.25. An R above 1 signals that the epidemic is growing.

More than 80 percent of all recently diagnosed cases are being traced to Seoul, which has been the country’s COVID-19 epicenter since spring last year, and cities nearby.

Seoul and its satellite cities are also where delta, believed to be the most transmissible variant yet, is mainly spreading. Delta cases in Korea have been “doubling every week,” Kwon, the minister, said, with the latest count on Saturday standing at 413. The figure excludes “close contacts” of newly confirmed delta patients who are still being traced.

Middle-aged and younger Koreans are falling prey to what may be a renewed spread, as the vaccination campaign has yet to reach those younger than 60 who are not part of the government-designated “essential workforce.” Slightly over 91 percent of infections found in the past week were people who had not been vaccinated.

“COVID-19 is spreading primarily among younger populations who are soon to become eligible for a vaccine later in the summer,” the minister said. Particularly in Seoul, the number of patients in their 20s rose by 75 percent this week compared to the week before to over 1,100.

“I urge young people in Seoul to remain vigilant and continue to exercise caution, so that Korea isn’t led astray from the path to normal life,” he said.

The ministry is to decide in a meeting with municipal authorities Wednesday whether to push through with reopening, which took force in the rest of the country barring the Seoul area on Thursday.

In the latest flip-flop in policy amid a climb in case rates, the ministry rolled back waivers from face mask mandates for people who are half or fully vaccinated, saying they would still need to mask in all social settings both indoors and outdoors.