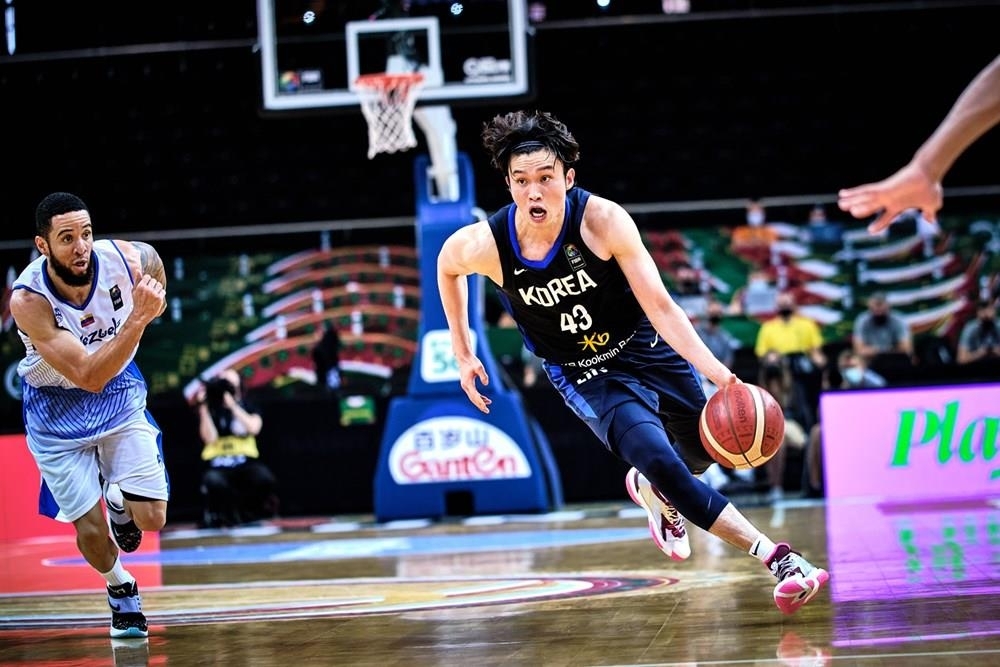 Lee Dae-sung of South Korea dribbles the ball against Venezuela during the teams' Group A match in the FIBA Olympic men's basketball qualifying tournament at Zalgirio Arena in Kaunas, Lithuania, on Wednesday, in this photo provided by FIBA. (FIBA)
South Korea is off to a losing start in its bid to qualify for the Olympic men's basketball tournament for the first time in a quarter century.

South Korea fell to Venezuela 94-80 in its first game of the FIBA Olympic qualifying tournament at Zalgirio Arena in Kaunas, Lithuania, on Wednesday (local time), as its spirited second-half comeback attempt fell short.

Davidson forward Lee Hyun-jung led South Korea with a game-high 18 points on a 7-of-14 shooting, and naturalized starting center Ra Gun-a, born Ricardo Ratliffe in the United States, chipped in 17 points and 10 rebounds.

After scoring the first basket of the game to go up 2-0, South Korea never led again the rest of the way.

South Korea, Venezuela and Lithuania are in Group A of the event in Kaunas. Group B features Poland, Slovenia and Angola.

After round-robin play, the top two teams from each group will advance to the semifinals. Only the final winner in Kaunas will qualify for the July 23-Aug. 8 Tokyo Olympics. South Korea's last Olympic appearance in men's hoops came in 1996 in Atlanta.

South Korea needs at least one win to have a shot at ranking in the top two in Group A. The tournament only gets harder for South Korea, as Lithuania boasts a pair of NBA stars in Domantas Sabonis (Indiana Pacers) and Jonas Valanciunas (Memphis Grizzlies).

The discrepancy in talent also showed against Venezuela, which had dropped its opening game to Lithuania 76-65 on Tuesday.

Lee, the only NCAA Division I player for South Korea, committed his third foul of the game just 17 seconds into the second quarter. And two straight three-pointers by David Cubillan gave Venezuela a 33-18 lead, en route to a 56-38 advantage at halftime.

Then South Korea started to chip away in the third quarter.

Down 61-45 with 6:18 left in the third, South Korea went on a 7-0 run, capped off by a three-pointer from Lee Dae-sung. South Korea then cut the deficit to 65-64 on Byeon Jun-hyeong's shot from downtown with 1:13 remaining in the quarter, though Venezuela stayed ahead 70-66 entering the final quarter.

Garly Sojo made a three for Venezuela to set the tone, and a steal and a layup gave Venezuela a 75-66 lead 1:36 into the quarter.

South Korea never got closer than six points. And whenever South Korea threatened to make a run, Venezuela had an answer, calmly draining free throws -- 12-of-12 in the quarter -- or jumpers.

South Korea committed 14 turnovers, which led to 28 points by Venezuela.

South Korean head coach Cho Sang-hyun attributed the loss to a barrage of three-pointers by Venezuela in the first half. Venezuela drained 10 shots from downtown in the opening 20 minutes.

"Those three-pointers put us in a hole," Cho said. "At halftime, we made some tactical changes to limit their three-point shooting. We made a good run in the second half, but we had a lot of turnovers. We also could have made better entry passes to Ra Gun-a."

Cho also said his players got outmuscled, and they should have done a better job against Venezuela's switching defense.

"One positive takeaway is that we did have a solid game against the favored team," Cho said. "Tomorrow's game (against Lithuania) will be a tough one. We'll have to address our shortcomings and try to be better than today."

There are three other qualifying tournaments taking place this week: in Victoria, Canada; Split, Croatia; and Belgrade, Serbia. (Yonhap)