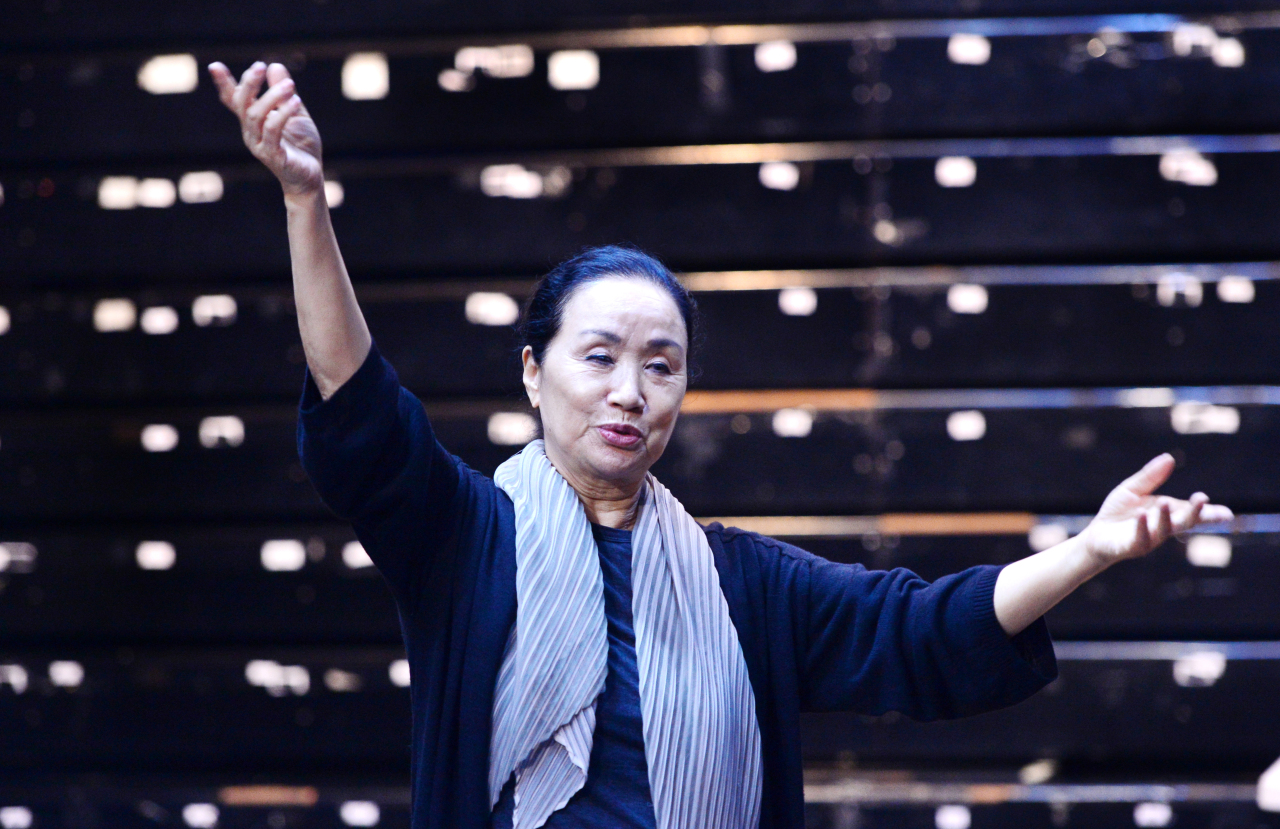 Kim Mae-ja poses during an interview with The Korea Herald held at Post Theater in the Hongdae area, western Seoul on May 27. (Park Hyun-koo / The Korea Herald)
Korean dance is more than just practicing techniques. It is about connecting the energy of people, according to Kim Mae-ja, master of changmu.

Kim, 78, is the founder and a leading figure of changmu, contemporary dance based on traditional Korean dance. Based on tradition, she created a new school of dance which strives to embrace both tradition and innovation. She is often referred to as the Isadora Duncan of Korea.

Kim’s life will be brought to the stage in the upcoming dance show “Deep Summer” which runs June 12-13 at the Seoul Arts Center, as part of the Master Series produced by the Chung Mong-Koo Foundation. Previous editions of the series featured master singer Ahn Sook-sun in 2019 and samulnori (traditional Korean percussion performance) master Kim Duk-soo in 2020.

The biographical show looks back on Kim’s life from when she swam across an icy river in the winter as she ventured south during the Korean War to when she founded the Changmu Arts Center in 1976, when she directed the choreography for the closing ceremony of the 1988 Seoul Olympics and more.

“I think my summer has already passed. It should be ‘Deep Winter’ or ‘Late Winter’ for me,” Kim said during an interview with The Korea Herald held at Post Theater in Hongdae, western Seoul, on May 27.

The show’s producer came up with the name of the show after five months of deliberations, concluding that Kim’s dance is currently in its summer.

Though more than 60 years have passed since she took up dancing, Kim is still not sure about being called a master.

“I still am not sure if I can be called a master,” she said.

Kim was a revolutionary figure in the local dance scene in the late 20th century.

While nudity onstage may not even turn heads today, in 1977, Kim caused shockwaves in the conservative traditional dance community when she chose not to wear beoseon -- traditional socks which were the symbol of traditional Korean dance at the time -- while performing.

“These days, I see young people dance and I feel as if my dance has become old. They dance something new that I cannot understand,” Kim said. “But then a critic told me, your dance is old but there is a reason it has become a classic. That is why it will continue its own life, even after generations have passed.” 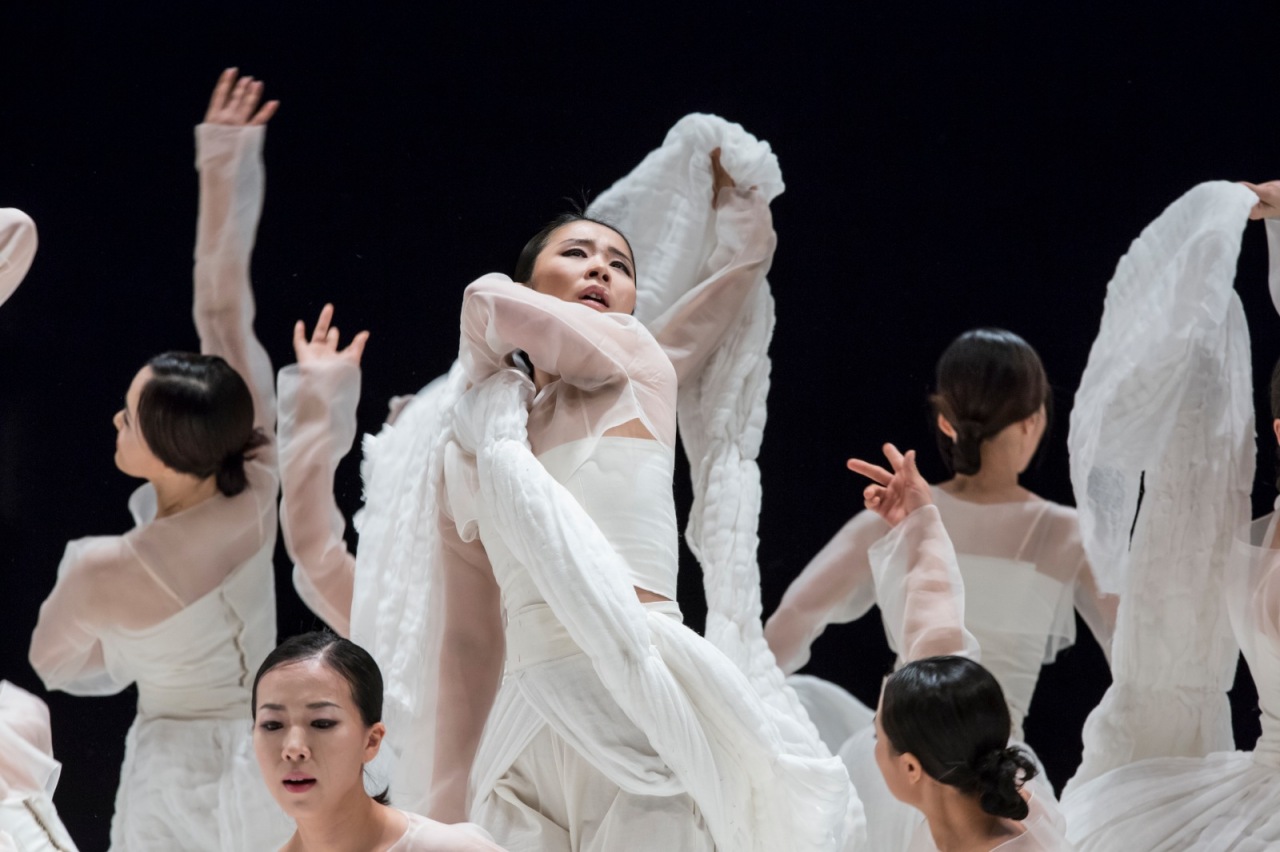 Dancers perform “One Fine Spring Day,” choreographed by Kim Mae-ja. (Courtesy of Kim)
Going a step further than pursuing only a solo career onstage, Kim has been dedicated to educating students about changmu. She was a professor in Ewha Womans University‘s dance department from 1971 to 1991.

“When I started to dance as a professional dancer, I did not dream of being a professor or being called a master. At the time, dancers did not have such titles. But at one point, I became a professor. It took me a while to be comfortable with the title,” she said.

“I ask my students to think about why my works have become a classic. You need to know the classics to move on to contemporary dances,” she said.

Kim emphasized the grammar of dancing.

“I always talk about the grammar, the grammar of our dances. It is about knowing what I want to express through dancing,” she said.

Korean dance is about creating energy inside through breathing and connecting, she said, referring to ritual dances such as salpuri and seungmu.

“When you raise your arms to make a circle, the lines you create don’t just end at your body. It connects throughout the space, covering the universe. I am the center of the universe when I dance,” Kim said. 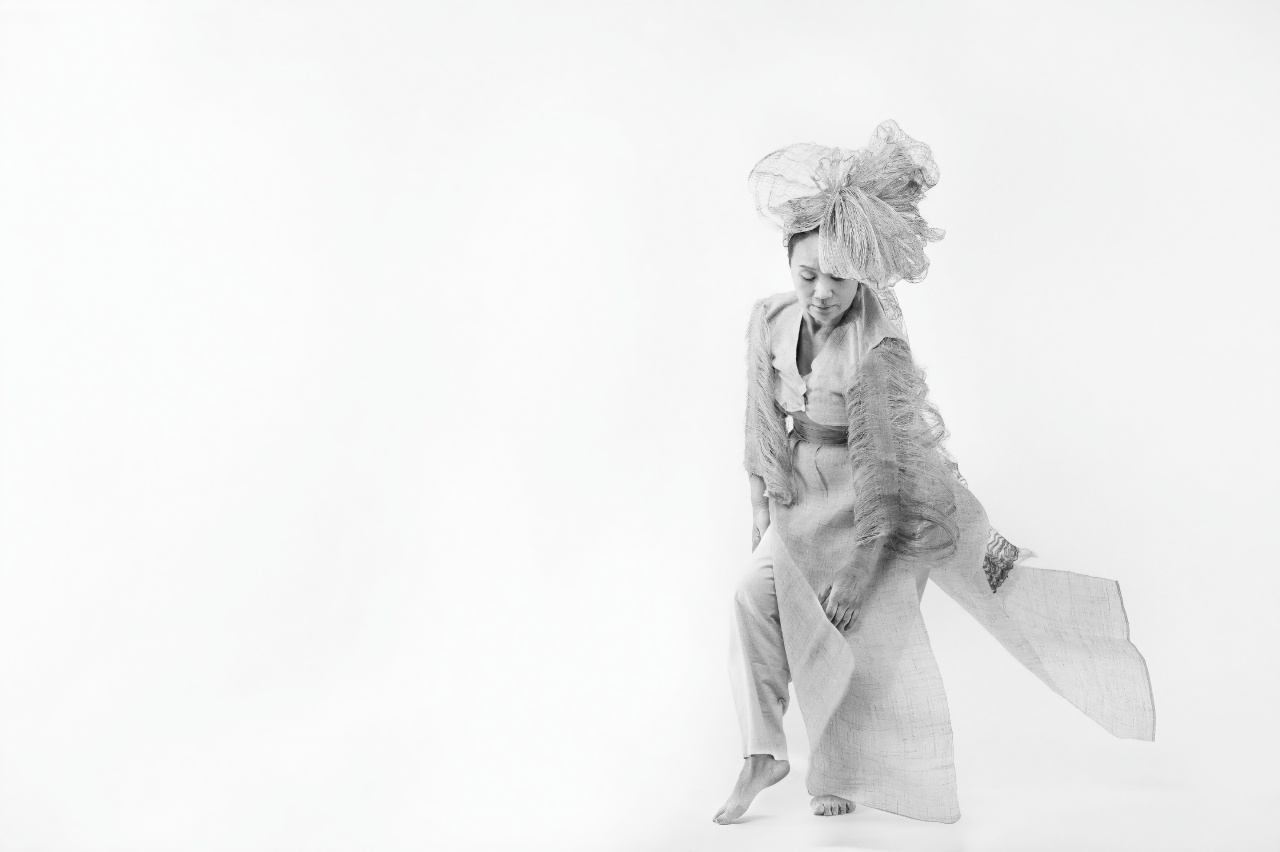 Kim Mae-ja performs “Chumbon” (Courtesy of Kim)
She believes remembering these concepts about Korean dance is important when it comes to creating productions that can be appreciated globally.

“I always tell my students to create works that can be exported. We should not imitate what others are doing overseas. But that does not mean 100 percent tradition will always work. There should be a message that the wider public can relate to,” she said.

Though it sometimes feels more convenient to perform solo, Kim has great affection for group dances.

“Most of my choreographed works are group dances as there is a lot to describe and express. Traditional Korean dance is about improvisation and uncontrolled movements,” Kim said.

“My dancers are not people who copy my movements. They have to flow with the rhythm with their own movements. I don’t make everything for them. The differences create harmony.” 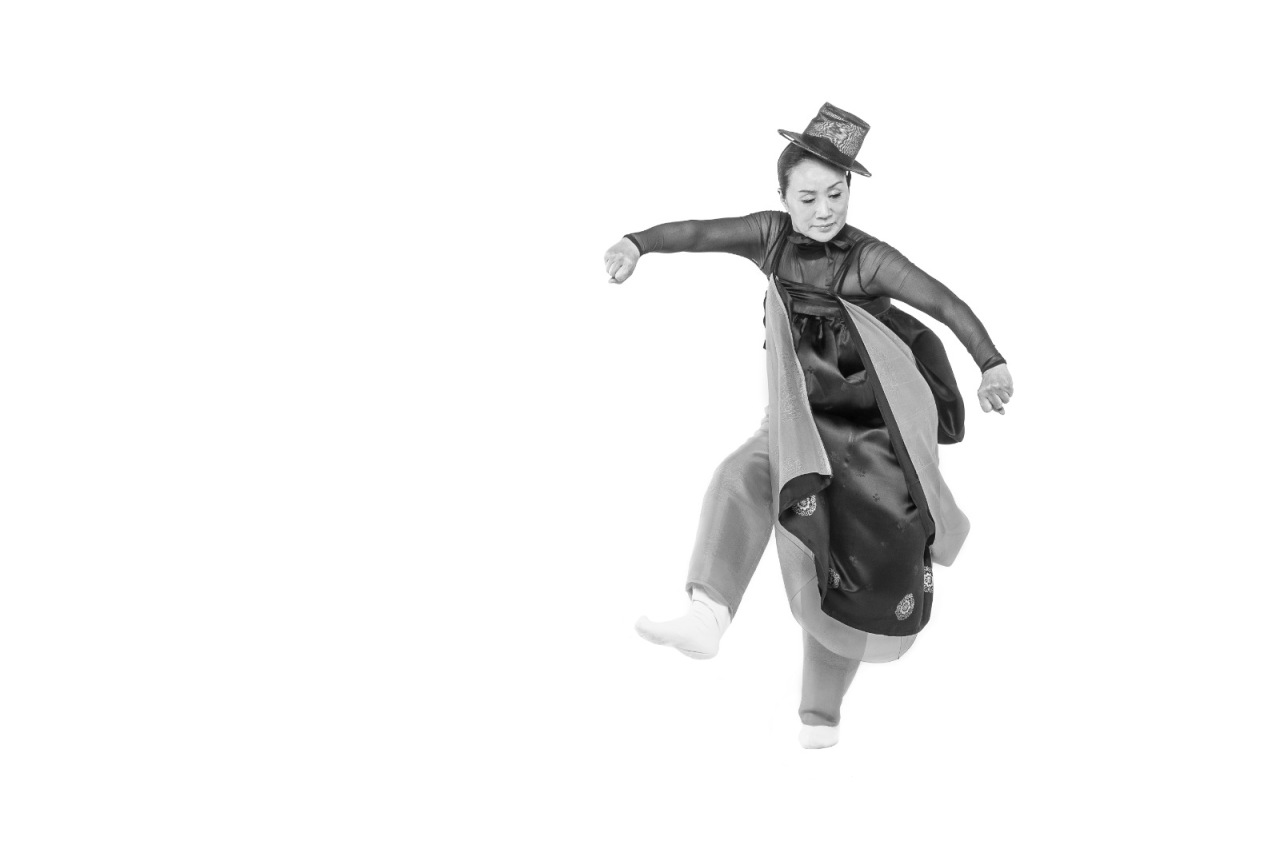 Kim Mae-ja performs “Chumbon” (Courtesy of Kim)
Though she has grown old and her physical ability may not be what it was when she was in her 20s, Kim believes she has a broader perspective onstage now.

“Now I can recognize everything on stage. I can see how others are moving on the stage. My body of course does not work as it did when I was in my twenties. But I can see the big picture,” she said.

Kim also spoke about her role as the head of the Changmu Performing Arts Festival. The annual festival invites individual dancers and dance groups from around the world who are dedicated to finding innovation in tradition. Though this year’s festival will only be able to feature domestic artists due to the pandemic, it is still grounded in that motto, she said.

Kim, who will soon be in her 80s, looks back to the past these days, both in her dance career and in her personal life.

“I have only danced. There is nothing else in my life. I wonder what it would have been like for me if I had taken interest in something else,” she said. “But even if I were to go back to the past, it would be the same. This is the only path for me.”

“On days, when there aren’t rehearsals I wake up thinking I want to rest at home. But in the afternoon, I am already itching to dance. I cannot stay still.”