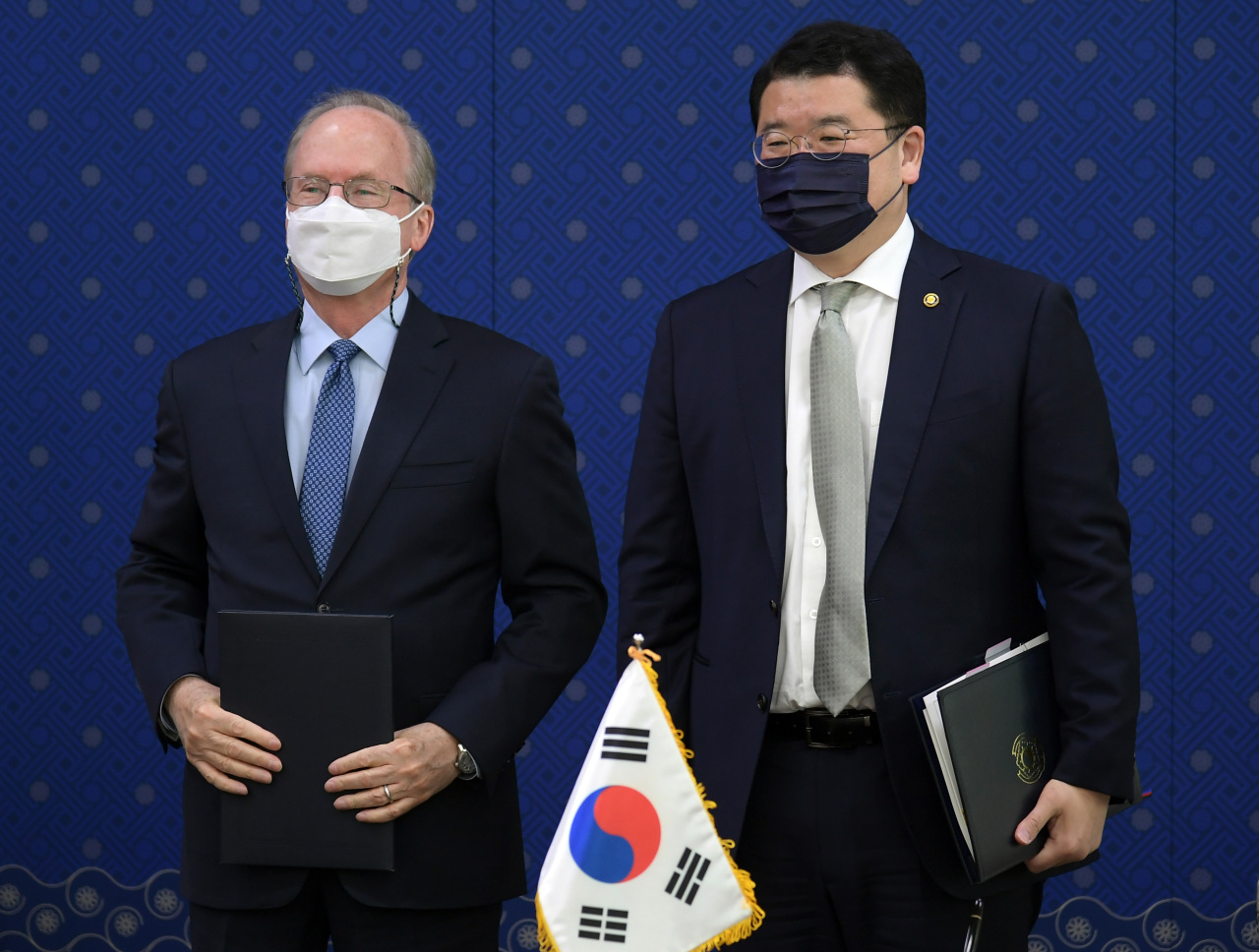 South Korean First Vice Foreign Minister Choi Jong-kun (right) and Rob Rapson, acting US ambassador to Korea, pose for a photo after they sign the 11th Special Measures Agreement on sharing the cost for stationing the US Forces Korea at the Foreign Ministry in Seoul on Thursday. (Yonhap)
South Korea and the US on Thursday signed the recently concluded agreement on how to share the cost of the US military presence here, resolving an impasse in negotiations that lasted more than a year and put a strain on the decadeslong alliance.

Under the new deal that was reached last month, Seoul agreed to pay 1.183 trillion won ($1.06 billion) this year for the upkeep of the 28,500-strong US Forces Korea. That is a 13.9 percent hike from the previous 2019 deal, the biggest annual rise for Seoul in nearly two decades.

The agreement, subject to parliamentary approval here before it can take effect, was signed in Seoul by South Korean First Vice Foreign Minister Choi Jong-kun and Rob Rapson, charge d’affaires at the US Embassy in Seoul.

The Foreign Ministry said it would send the agreement to the National Assembly for ratification at an early date.

The new Special Measures Agreement, the pact that governs the stationing of the American troops, will be effective for six years until 2025, and also covers last year when both sides failed to reach a deal. The two sides decided to freeze the 2020 payment at the 2019 level of 1.04 trillion won.

From 2022 to 2025, the amount will be determined in accordance with the rate of annual increase in Seoul’s defense budget, according to the ministry. This means in 2022, Seoul’s payment will rise by 5.4 percent -- the same as the defense budget increase for this year -- and will have to fork out around 1.24 trillion won.

Based on the Defense Ministry’s forecast of a 6.1 percent on-year increase in defense spending, Seoul’s contribution could amount to around 1.5 trillion won in 2025.

Despite the significant increase, Seoul expressed relief at finally sealing the deal in March. Cost-sharing negotiations had dragged on since 2019 as former US President Donald Trump demanded a sharper increase in Seoul’s contribution, up to a fivefold increase at one point.

The absence of a funding plan for the US troops here and the dispute between the allies had prompted fears that their joint readiness to tackle potential security threats from Pyongyang could be undermined.

The deal was clinched within two months after President Joe Biden took office, reflecting the new administration’s focus on restoring the alliance as a bulwark against unprecedented challenges, including a nuclear-armed North Korea, and to keep an assertive China in check.

The initialing of the agreement took place last month when US Secretary of State Antony Blinken and Defense Secretary Lloyd Austin were in Seoul for their “2+2” meeting with their South Korean counterparts, during which time the two countries reaffirmed their alliance and resolved to tackle various issues together.