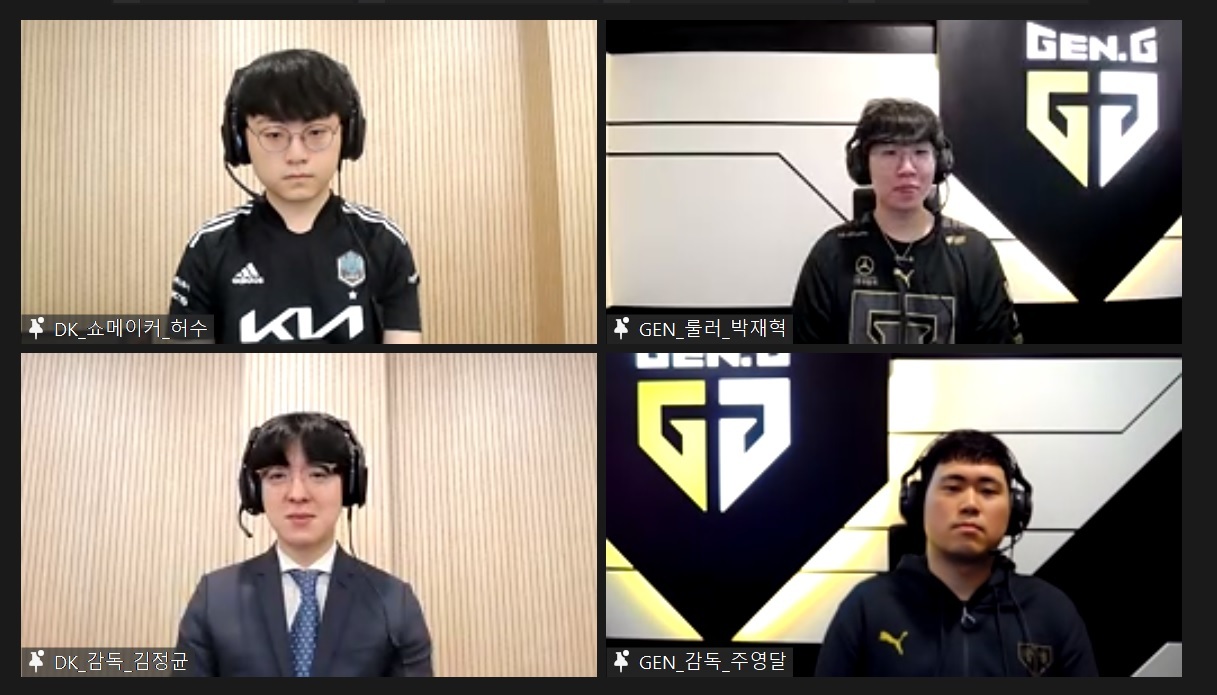 (Clockwise from top left) Heo “ShowMaker” Su, Park “Ruler” Jae-hyuk, coach Ju “oDin” Young-dal of Gen.G Esports and coach Kim “kkOma” Jeong-gyun of DWG Kia attend an online press conference Tuesday (Lim Jang-won/The Korea Herald)
All eyes are on DWG Kia and Gen.G Esports as the two head to the 2021 LCK Spring Finals on Saturday to play for the spring title and a chance to play at the Mid-Season Invitational in May.

During the online press conference Tuesday for the LCK Spring Finals, both coach Kim “kkOma” Jeong-gyun of DWG Kia and Ju “oDin” Young-dal of Gen.G Esports expressed immense respect for their opponents, but each had confidence in coming out victorious.

“Facing DWG Kia, who are the reigning world champions, we are coming in as challengers,” said Gen.G coach Ju. “Our goal is to be the best team in the world so I am motivating the players to win against DWG Kia.”

DWG Kia is considered by many to be one of, if not the strongest team in the world this year. Although its star player Heo “ShowMaker” Su suffered a wrist injury earlier in the playoffs, he said that his wrist is much better now and will not impact his performance in the finals.

“I don’t think DWG Kia has any weakness. They are such a perfect team. The player that I am keeping an eye out for is their mid and jungle, ShowMaker and Canyon. But at the same time, we have BDD and Clid, so I am not too worried.” said Ju. “If we win, we’ll 3-0 them, but if we lose, it’ll be a 3-2.”

DWG Kia and Gen.G Esports placed in the top two in the regular season and wiped out their opponents Hanwha Life Esports and T1 3-0 in the second round of the playoffs, proving they are a step above the rest.

Coach Kim of DWG Kia also commended Gen.G’s Kwak “BDD” Bo-seong for his strong performance in the second round of playoffs against T1, but felt that DWG Kia’s Heo “ShowMaker” Su could handle him without problem.

“I think every player in Gen.G can carry and play well. In the finals, I think the focus will be on bot (bottom) lane,” said coach Kim. “I think we’ll win 3-2.”

With the ticket to the MSI in Reykjavik, Iceland in May on the line, the players and coaches expressed strong desires to head there. Gen.G player Park “Ruler” Jae-hyuk said that he has looked up flight hours in anticipation.

At the MSI, players will not only face the spring champions of different regions, but also play at the stadium instead of at their team facilities for the first time this year as LCK Spring was held entirely online.

“The players, coaches and the staff all want to play offline. At MSI, we will be able to play at the stadium, which will be amazing,” said Ju.

Both coaches also mentioned that they looked forward to playing against the LEC, the European LoL league, at the MSI.

The finals between DWG Kia and Gen.G Esports will take place at 5 p.m. on Saturday and can be seen online at Twitch, Afreeca TV, Naver and others and on the Afreeca TV channel.