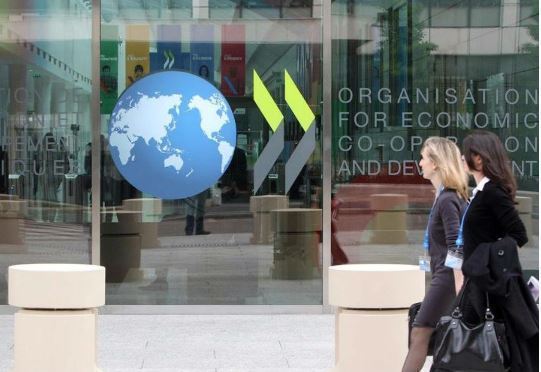 Despite the prolonged economic fallout from the COVID-19 pandemic, South Korea is forecast to have reentered the list of the world’s 10 largest economies by nominal gross domestic product in 2020, data showed Monday.

Asia’s fourth-largest economy’s nominal GDP for last year was estimated at $1.624 trillion, which marked the ninth highest among 14 major countries, up two notches from the previous year, according to data from the Organization for Economic Cooperation and Development. Its nominal GDP rank fell to 11th in 2019.

The growth forecast for South Korea slightly outpaced that of Canada ($1.62 trillion), raising hopes for consolidating the ninth position if its actual economic performance is reflected on measurement. The list followed with Russia ($1.403 trillion) and Australia ($1.333 trillion), respectively.

The OECD, a forum of 37 mostly advanced nations, calculated the latest nominal GDP growth estimates by employing economic growth forecasts measured in March and December last year, respectively, and the foreign exchange rate as well the GDP deflator, a measure of price inflation.

Nominal GDP is the total value of goods and services produced within a country’s borders without adjustment for inflation, while real GDP -- another economic indicator designed to keep track of a country’s economic growth -- reflects all of the changes in market prices.

The local economy fared better than some major OECD member countries, largely due to the government’s swift policy response to buttress its economy reeling from the COVID-19 crisis, the OECD said.

Since the COVID-19 pandemic began to sweep the country in February last year, financial authorities have implemented three rounds of relief funds worth a total of 31.4 trillion won ($27.6 billion), in a move to support small businesses and vulnerable households hit by the brunt of the pandemic.

Another new batch of emergency cash handouts is slated to take place as early as later this month.

Meanwhile, in line with the government’s expansionary fiscal programs, the Bank of Korea recently froze its base rate at a record low of 0.5 percent to continue injecting liquidity into local financial markets.

Driven by the state-led economic stimulus measures, the local economy contracted 1 percent on-year in 2020, which was third best among 15 major economies, trailing China and Norway, which grew 2.3 percent and minus 0.8 percent, respectively, OECD data showed.