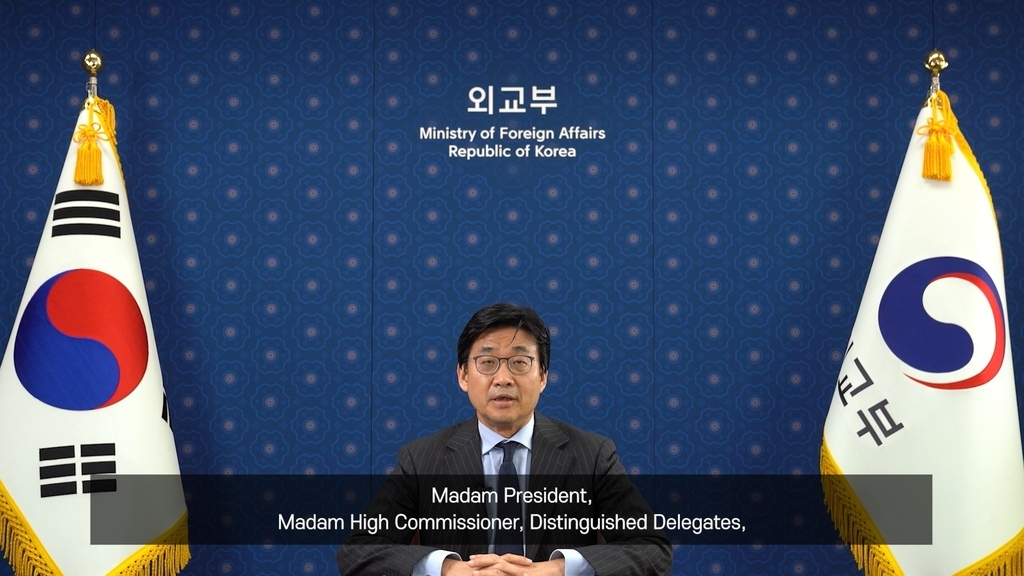 Second Vice Foreign Minister Choi Jong-moon speaks during a virtual high-level segment of the UN Human Rights Council on Tuesday, in this photo released by the foreign ministry. (Ministry of Foreign Affairs)
Second Vice Foreign Minister Choi Jong-moon has said that the tragedy surrounding victims of Japan's wartime sexual slavery must be addressed as a "universal human rights issue," vowing to continue Seoul's efforts to restore their dignity.

Choi made the remarks in a prerecorded speech for the virtual high-level segment of the UN Human Rights Council on Tuesday (Geneva time), as the issue of the wartime sexual slavery resurfaced with a Harvard professor's much-criticized claim that the victims were voluntary prostitutes.

"Current and future generations should learn valuable lessons from the painful experience of the 'comfort women' victims from World War II," Choi said, referring to the euphemism for the former sex slaves.

"The tragedy of the 'comfort women' must be addressed as a universal human rights issue, and the recurrence of such grave violations of human rights in conflict must be prevented," he added.

The issue also remains a thorn between Seoul and Tokyo, as a Korean court ordered Japan last month to make reparations of 100 million won ($89,928) each to 12 former sex slaves -- without recognizing sovereign immunity in the trial.

In his speech, Choi reiterated Seoul's "survivor-centered approach" to restore the honor of the victims.

"The Korean government will keep endeavoring to restore the dignity and honor of the comfort women victims -- a dwindling number of elderly women in their 90s -- with a survivor-centered approach at the core," he said.

The vice minister also stressed Seoul's "profound interest" in the human rights situation in North Korea, while noting that the humanitarian situation in the North could deteriorate due to economic sanctions, COVID-19 and natural disasters.

"Concerns over the human rights situation should not hinder us from paying attention to the humanitarian situation in North Korea," he said.

Choi went on to call attention to the tragedy of families separated by the 1950-53 Korean War, calling it one of the most urgent humanitarian and human rights matters.

"We hope that the issue will be resolved peacefully, in adherence with a lawful and democratic process," he said. (Yonhap)