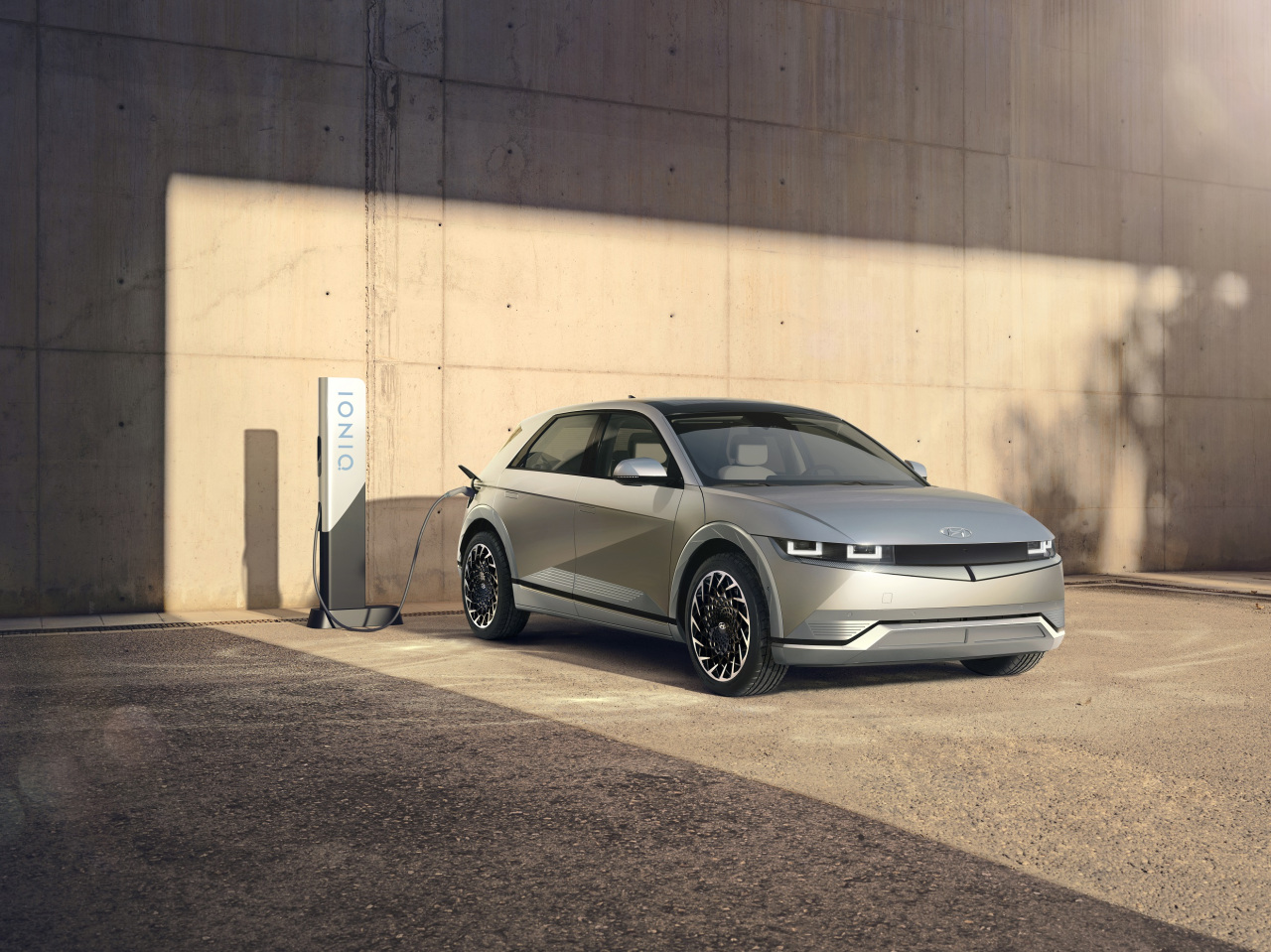 Hyundai Motor’s Ioniq 5 (Hyundai Motor)
Hyundai Motor unveiled the all-electric midsized sport utility vehicle Ioniq 5 on Tuesday. It is the first model to use the automaker’s own electric vehicle platform, the Electric-Global Modular Platform or E-GMP.

In an online press conference, Hyundai Motor President Chang Jae-hoon and executives presented the Ioniq 5, highlighting how the new car would set the standard for an electric mobility lifestyle with sustainable and innovative features.

“Electrification is the major focus of the paradigm shift in the global automotive industry, and global demand is expected to grow by about 30 percent this year,” Chang said during the online unveiling event.

“The Ioniq 5 sticks to the basics in performance, and fulfills the rising demand for innovative use of interior space. With the Ioniq 5, we seek to lead the global electric vehicle market and to gain a foothold as a top-tier brand.” 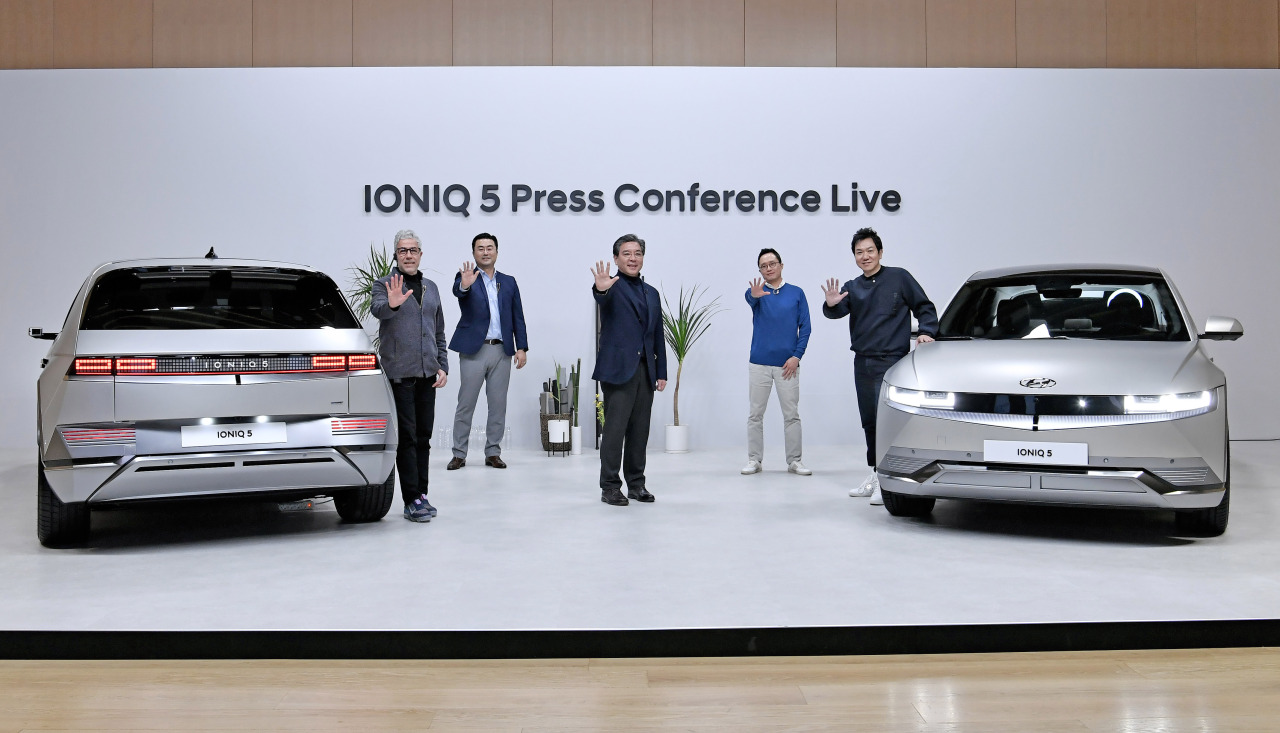 Hyundai Motor President Chang Jae-hoon (center) and executives pose at the Ioniq 5 unveiling press conference held online Tuesday. (Hyundai Motor)
The Ioniq 5 can support 400-V and 800-V charging infrastructure, with the 800-V charging capability as the standard. This means that with a 350-kilowatt charger, the vehicle can go from 10 percent to 80 percent-charged in 18 minutes, Hyundai said.

It can drive up to 470 to 480 kilometers on a single charge, when equipped with the two-wheel drive and a 72.6-kilowatt-hour battery, the company said.

The new vehicle is also equipped with the new Vehicle-to-Load function, which means users can use the car’s battery to charge other electric devices, such as electric bicycles, scooters and camping equipment.

For the interior, the new car has embraced a “living space” theme, with its ample interior space made possible by the long wheelbase of 3,000 millimeters -- 100 millimeters longer than Hyundai’s other SUV model, the Palisade.

Chang and Lee Sang-yup, the senior vice president and head of the Hyundai Global Design Center, got in the Ioniq 5 to move the center console -- between the driver’s seat and the passenger’s seat in the front -- back and forth to show that it can slide back as much as 140 millimeters.

The car has a flat floor, and the front and rear seats can be moved back and forth as well, while the front seat has a reclining function. 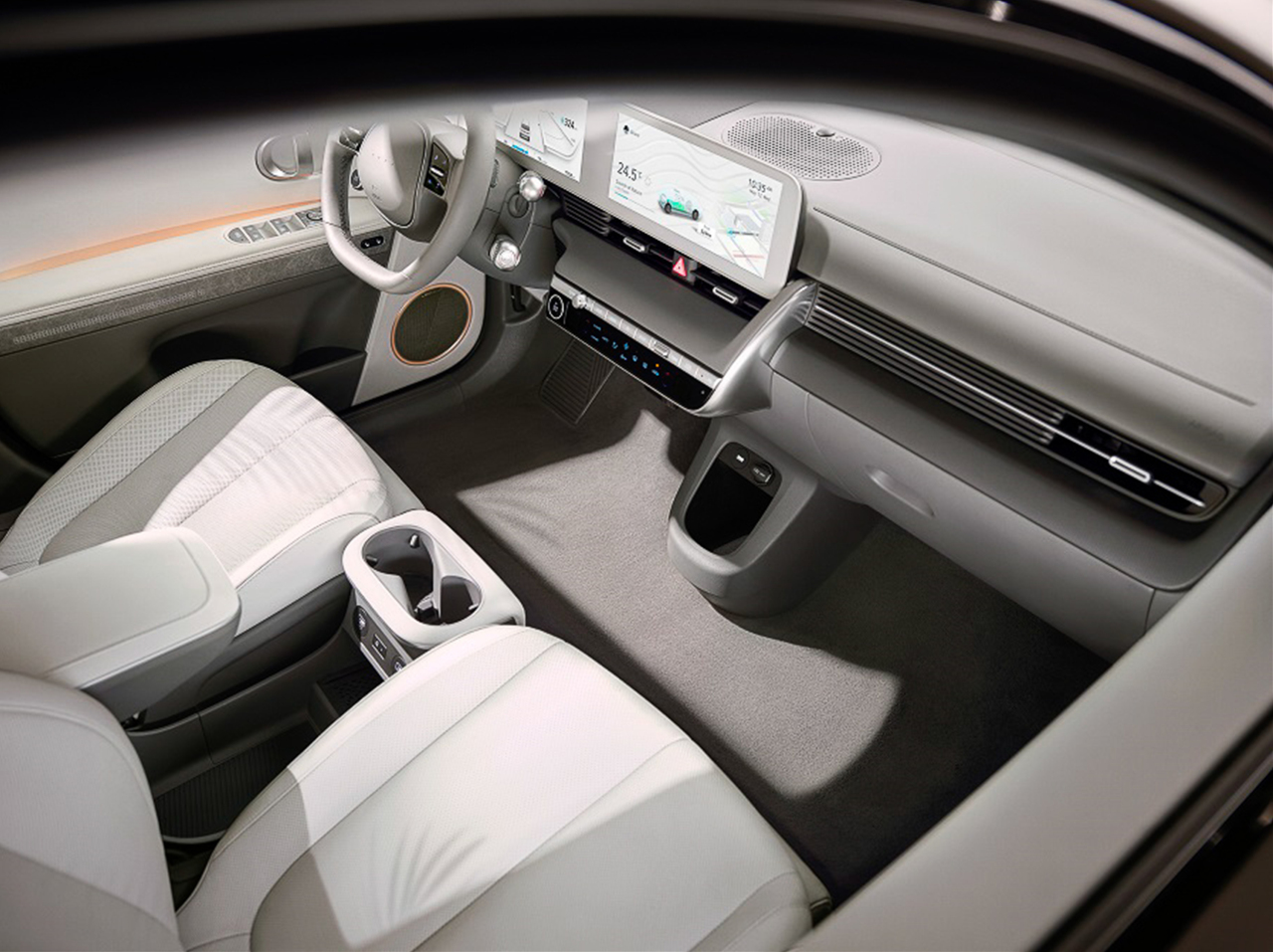 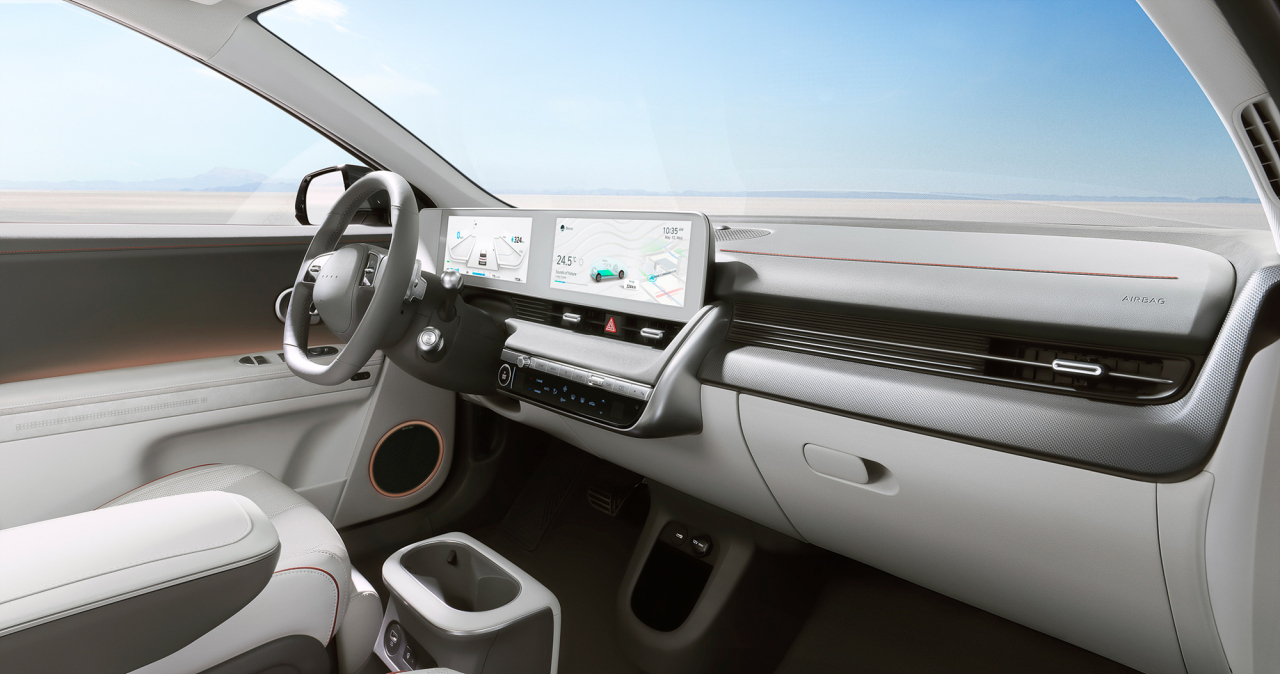 Hyundai Motor’s Ioniq 5 (Hyundai Motor)
Lee also stressed that the company had taken great care to use eco-friendly materials to make different parts of the car -- the seats, door trim and armrest, among others -- such as recycled PET bottles, plant-based yarn and eco-processed leather with plant-based extracts.

For the exterior design, Lee explained that the car is the mass-produced version of the concept car 45, which the company introduced at the 2019 International Motor Show Germany.

“Ioniq 5 is inspired by Hyundai Pony, which is the company’s first production car rolled out in the 70s. At the same time, the EV creates its own modern look of the future.”

During the unveiling event, Chang apologized over recent accidents involving its Kona electric vehicle, which caught fire for unknown reasons.

“We have been sincerely cooperating with the Transport Ministry with our battery producer partner for the investigation on the causes of the accident. The results are expected to come out soon, and we will be able to inform you, along with the government,” Chang said.

Preorders will begin in South Korea on Thursday. According to Hyundai, it will be delivering the cars to customers in Korea and Europe in the first half of this year, and then in the US and other regions in the second half of the year.

The Ioniq 5 will be presented in three trims: Standard, Long Range Exclusive and Prestige. Prices are expected to start from around 50 million won ($45,000) for the lower trim and in the mid-50 million won range for the higher trim, but the final price tag will likely come out to be lower when tax benefits are applied, the company said.