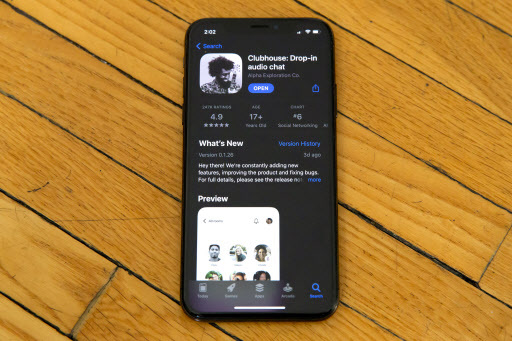 Clubhouse (AP-Yonhap)
With the rise of US social media app Clubhouse, Korean celebrities also quickly hopped on the trend to socialize with their celebrity acquaintances as well as fans.

Developed by California-based startup Alpha Exploration, the buzzy app is a new type of social network based on voice.

The platform allows users to start and join its unique group chat room. Creators of the room and few others that are chosen by the creators can talk freely in this conversation room, while others listen. These listeners in the room can also earn a chance to talk from the speakers by virtually “raising a hand” on the platform. Up to 5,000 people can join each chat room.

Similar to many existing social media, Clubhouse users can “follow” others on the app. The users on the app can find out if people they are following are involved in any chats at the moment.

One of the features that make Clubhouse unique is its invite-only system. People have to be invited by friends or acquaintances that they have a phone number on their smartphone to join the app. A new user initially gets two invites.

Those who cannot receive a direct invitation from the current users can also find their way in by putting their names on its waitlist. These people on the list can join the service once the current users wave them in.

Some Korean celebrities are using this new platform to communicate with their fans.

Singer Horan of experimental band Clazziquai Project recently opened a chatroom called “lullaby” on the app and communicated with her fans. She even sang few songs in her room and allowed her fans to sing along with her.

Rappers Mino of boyband Winner, Swings, actor Gong Hyo-jin among many other stars also opened a chatroom of their own to communicate with fans and acquaintances.

“I did not have the courage to raise a hand and talk on the platform, but it was nice to overhear the conversation that Gong Hyo-jin had with her acquaintances and fans. I felt like I am at a fan meetup,” a netizen said in a blog post.

Nonetheless, some Korean stars criticized some of Clubhouse’s features, including the invite-only system.

“I heard those invitations are sold at 10,000 won to 20,000 won. This reminds me of people trying to enter royal parties of the old Middle Ages. What century are we living in?” rapper Din Din said on his radio show ‘Music High’ of SBS. The rapper also said that the conversation seemed one-directional in some of the group chat rooms that he was in.

Reflecting the app‘s hype, on online and mobile secondhand stores like Danggeun Market and Joonggonara, an invitation code for the Clubhouse has been sold at around 10,000 to 30,000 won.

Actor Kim Ji-hoon also posted on Instagram that he is not sure about using the platform, as it seems to influence people’s self-esteem by making them feel like they are missing out on something important if they do not get an invitation.