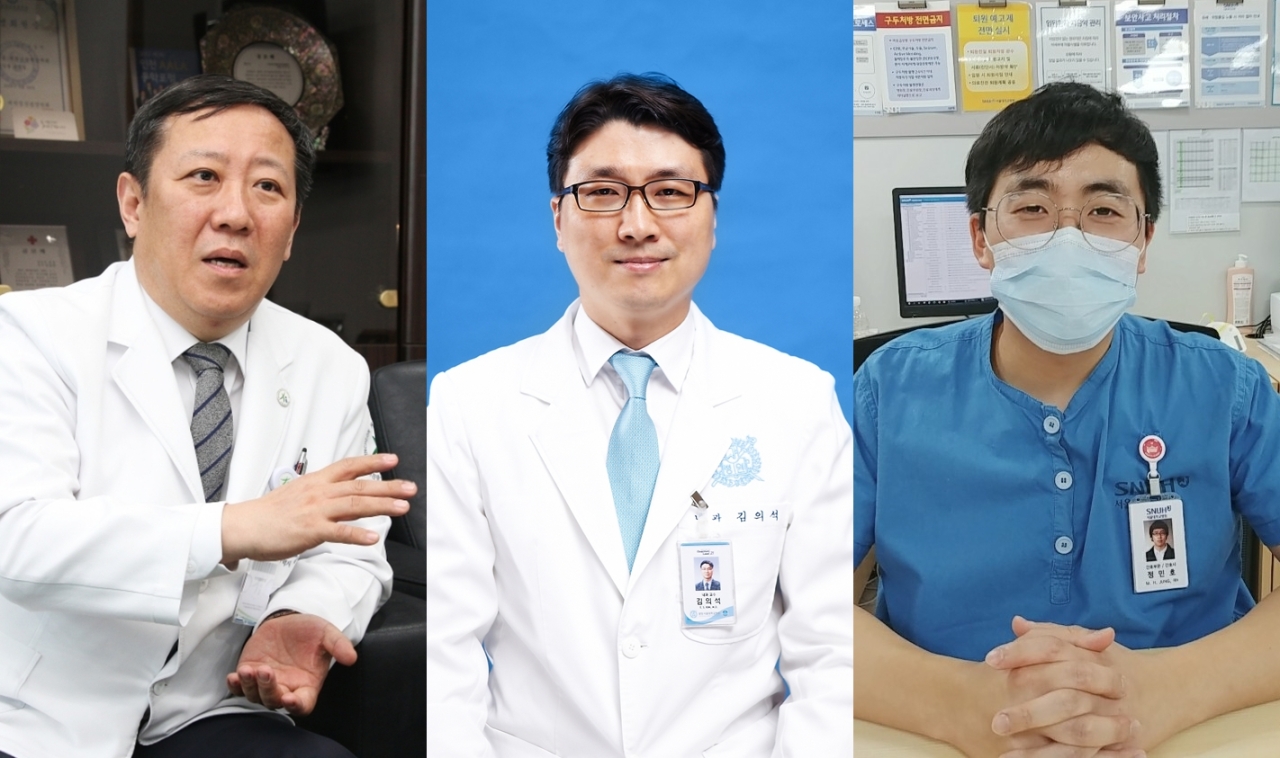 From left, Dr. Cho Seung-yeon, director of the Incheon Medical Center; Dr. Kim Eu-suk, infectious disease specialist at Seoul National University Hospital in Bundang, Gyeonggi Province; Jung Min-ho, a COVID-19 nurse at Seoul National University Hospital in Jongno, Seoul
The novel coronavirus has been in South Korea for one full year as of Wednesday, and medical professionals have been on the front lines of the ongoing struggle.

Ahead of COVID-19’s one-year anniversary, three front-line workers who treated the country’s very first COVID-19 patients spoke to The Korea Herald on Tuesday about their encounters with the brand-new disease.

The first people confirmed to be infected with the coronavirus in Korea had either traveled to Wuhan, China, or come into contact with someone who had, suggesting a Chinese origin for the epidemic here.

Once Korea found its “patient zero,” it took just about a month for the cases snowball into a large community outbreak in Daegu in late February.

“It was Jan. 19 of 2020. The hospital was on emergency mode after an alert from authorities that a feverish passenger had arrived from Wuhan,” said Dr. Cho Seung-yeon, the director of Incheon Medical Center.

The woman from Wuhan, a Chinese national, became the first known COVID-19 patient in Korea. It was also the first documented case of an infected passenger traveling here from China.

She was already sick when she flew into Incheon, and the airport officers sent her to the nearest hospital. She tested positive for the disease the next day. Ensuing investigations revealed she had visited a clinic in Wuhan for cold-like symptoms a day prior to her departure for Korea.

Cho said the hospital had been preparing for patients with the virus to turn up since the news broke of the pneumonia-like “mystery illness” in China. Incheon is the gateway to Korea, and naturally the public hospital closest to the border is often the first to take in patients with diseases circulating abroad, he said.

“Our hospital had run emergency drills, set aside beds for patients and suspected patients, and when the first patient came our staff were ready,” he said.

He said the patient, relatively young in her mid-30s, did not come down with severe illness and was discharged within less than three weeks.

“But one of the things that struck us as odd was that although her chest X-rays were clean, her chest CT showed patterns of abnormalities known as ground-glass opacities,” he said. “So that was unlike other viral pneumonia.”

In addition to a fever and cough, she also had diarrhea and other digestive symptoms -- later found to be rather common among coronavirus patients, he said.

She was relatively stable, walked out of the hospital healthy, and left a thank-you note for the medical staff on her last day, he said.

Since its success with that first case, the hospital has treated around a third of Incheon’s over 3,000 patients so far.

Dr. Kim Eu-suk, who treated Korea’s fourth coronavirus patient, says he got “the first glimpse of the epidemic” just as it was about to sweep across the country.

The 55-year-old Korean man was diagnosed with the disease Jan. 27, 2020, a week after returning home from Wuhan. As he was one of the more severe cases among the early patients, he received a lot of press attention at the time.

Kim, who is an infectious disease specialist at Seoul National University Hospital in Bundang, Gyeonggi Province, said the patient already had pneumonia in both lungs at the point of admission.

“He had shortness of breath and required oxygen therapy. But he said he was feeling OK,” he said. Kim later began to notice a similar pattern with coronavirus patients -- a discrepancy between patients’ perception of their condition and how sick they actually are.

By February he and the other doctors looking at the preliminary data had assessed the virus to have “high pandemic potential,” he said.

“The patients start shedding the virus in the initial stages without being visibly sick. Which means that they can spread the disease silently in the community before seeking medical help,” he said.

Although there was no precise treatment guidance early on in the epidemic, he prescribed antiviral drugs such as remdesivir and Kaletra, which were believed to work against COVID-19 at the time.

His first patient responded to treatment quickly and was well enough to go home by week two, he said. Since then, he has treated about 150 patients with severe cases of COVID-19.

He said the 2015 outbreak of Middle East respiratory syndrome had prepared him and his colleagues at the hospital for the advent of the new virus.

“I think we’ve been trained for similar scenarios so it wasn’t an entirely new experience,” he said.

Asked to reflect on the year, he said, “My hope is that there won’t be an explosive surge in patients until there are vaccines. If resources run out we will be forced to make unfortunate choices.”

Jung Min-ho, a nurse at Seoul National University Hospital in Jongno, Seoul, remembers having to deal with greater levels of fear among patients about a year ago, when not much was known about the virus.

“Now patients have a better grasp of what they are facing. But in the early days, patients were more worried, even terrified. Some did not understand why the hospital did not have a cure for the disease,” said Jung, who has worked at the hospital’s COVID-19 ward for the past year.

He cared for Korea’s sixth patient, a 55-year-old Korean man who caught the virus about week after dining with a Wuhan returnee. Both of them came down with the disease.

He said the patient, who was at the center of the first locally transmitted case, would check the news constantly and ask questions about what to expect. “He was very worried when he was first admitted, but he got better pretty soon over his stay,” he said.

“As a nurse, I consider it a part of my job to make the patients feel more at ease. So it made me feel sorry that there were some questions that even I couldn’t give answers to,” he said. “It was a new disease to patients and medical staff alike.”

Because visits are restricted on the COVID-19 ward, the medical staff were the only people who kept the patients company, he said. Over the past year, he and his team have seen at least hundreds of coronavirus patients.

He said the start of the pandemic “seems like a life time ago.” “I don’t know how the year went by. It was definitely the busiest year of my nursing career,” he said.

“Some former patients have sent us thank-you letters. It’s a tough job, but it’s nice to feel appreciated.”