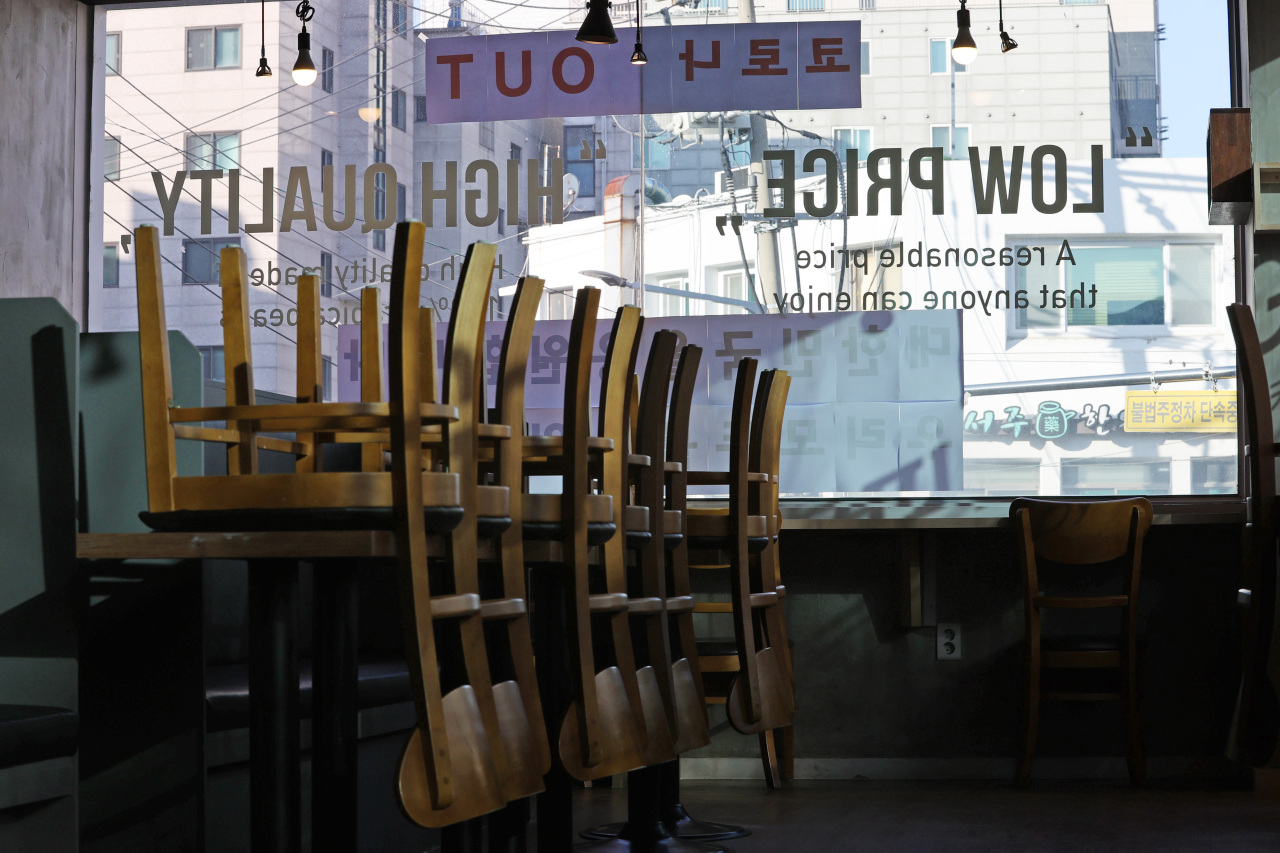 Chairs are stacked up at a cafe in Gwanak, Seoul. Indoor services are prohibited at all cafes nationwide. (Yonhap)
The South Korean government on Wednesday said there would be “stiff penalties” for people not heeding social distancing rules, as the third and worst wave of COVID-19 in the country has begun to mellow. From its recent peak of over 1,000 cases a day, the daily case count has fallen to below 600 this week -- a figure not seen since early December.

Yoon Tae-ho, a senior official at the Ministry of Health and Welfare, told a news briefing that social distancing was a “civic promise for keeping each other safe,” and that those not complying with the rules will be subject to “stern consequences based on the laws and principles.”

Since early December, 434 people have been caught breaking social distancing rules, according to police data. Police have referred 23 of them to the prosecution, with investigations still ongoing for the other 411.

Nearly half of those found in violation were owners of nightlife establishments such as escort bars who operated their businesses illicitly. Last month, Seoul’s Gangdong-gu office busted four sex workers and their pimp in a crackdown conducted jointly with police.

There have been 77 violators of the ban on private gatherings of five people or more, which was first instituted in the Seoul metropolitan area on Dec. 23. Indoor dining in groups of five or more was also prohibited nationwide on the same day.

Among those facing police investigations on suspicion of violating the ban is the ruling Democratic Party of Korea Rep. Hwang Un-ha. At least two of the people who dined with the lawmaker on Dec. 26 at a Daejeon restaurant tested positive for the disease a few days after their meeting.

Yoon, citing Statistics Korea’s analysis of smartphone GPS data, said movements in Seoul rose slightly by 3.6 percent over the weekend compared to the week before.

“As around 40 percent of patients being newly diagnosed have gotten the disease from their family or friends, practicing social distancing is still as paramount,” he said, warning against waning public compliance with social distancing.

Korea on Wednesday announced 536 locally transmitted and 26 imported cases of COVID-19, according to the Korea Disease Control and Prevention Agency. The cumulative total of official cases stands at 70,212.

In the last seven days of Jan. 7 to Wednesday, the count of new infections per day averaged 593, down from the previous week’s 833.

Yoon said that Korea was “past the peak of the third wave of COVID-19,” but that “the infection rate must drop further before restrictions can be eased.” Whether to keep or soften the current level of social distancing will be announced in a government briefing Sunday.

By region, Seoul has by far the most confirmed cases in Korea at 21,216, followed by nearby Gyeonggi Province at 16,198. The two regions also have the most deaths, with a combined toll of 614.

So far in January, COVID-19 has claimed the lives of 268 people. This means that over one-fifth of the 1,186 total deaths here have taken place during the first 12 days of this year.

Out of the 14,391 patients with active infections, 374 are severely or critically ill. By Tuesday afternoon, 65 percent of all intensive care unit beds in the country were filled.