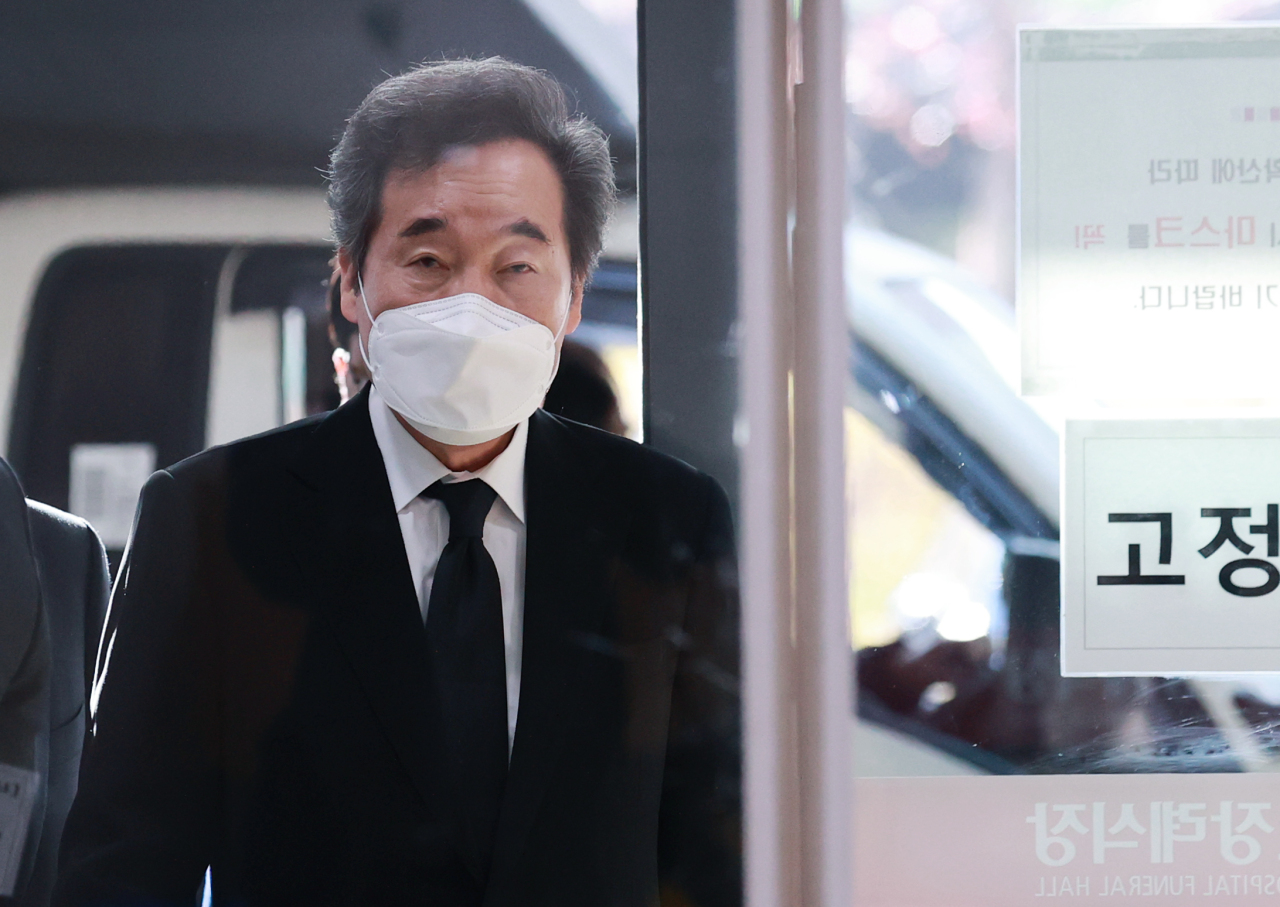 Democratic Party Chairman Lee Nak-yon arrives at a hospital in Seoul to visit the funeral parlor for his close aide, who was found dead the previous night, on Friday. (Yonhap)
An aide to Democratic Party leader Lee Nak-yon was found dead Thursday after prosecutors questioned him over allegations that a firm suspected of involvement in investment fraud paid for Lee’s office supplies.

Police found the deputy chief of Lee’s secretariat, also surnamed Lee, dead in a building near the Seoul Central District Court around 9:30 p.m. on Thursday during a search, after he was reported missing.

Lee, accompanied by a lawyer, was interrogated at the Seoul Central District Prosecutors’ Office until 6:30 p.m. on Wednesday, and the questioning was scheduled to resume after dinner but he went missing.

Lee reportedly told his family that he was sorry before he died.

Police are looking into what caused his apparent suicide.

A Seoul City election committee filed a complaint with the prosecution against the aide last month over suspicions that Optimus Asset Management paid for the lease of a copy machine used at the Democratic Party leader’s office.

Democratic Party leader Lee said Friday that he could not hold in his sadness over the death of his aide.

“I am at a loss as to how I should console the bereaved family,” Lee was quoted as saying by his chief secretary.

The deceased Lee reportedly met Rep. Lee Nak-yon as an aide managing his constituency in the South Jeolla region nearly 10 years ago.

He handled funding and organization during Rep. Lee’s gubernatorial election campaign in South Jeolla Province in 2014, and served a year and two months in prison for violating the election laws as he and others were found to have paid Rep. Lee’s party membership fee.

In December 2015, Lee Nak-yon, then governor of South Jeolla Province, hired the late Lee as his special adviser on political affairs four months after his release from jail. Opposition politicians made an issue of the party membership fee during Lee Nak-yon’s 2017 confirmation hearing as a prime minister nominee, saying it made no sense that Rep. Lee’s aides and associates had spent 50 million won ($46,000) on him and questioned where the money had come from.

The deceased Lee was called in as a witness at the time, but did not show up at the confirmation hearing. He was out of the public eye after Rep. Lee became prime minister, but resumed his activities during the parliamentary election campaign early this year.

Since Rep. Lee was elected leader of the Democratic Party at its Aug. 29 national convention, the late Lee had served as deputy chief of the party leader’s secretarial office in Seoul’s Yeouido.

He was back in the spotlight again upon news reports in October that Trust All -- an affiliate of Optimus Asset Management, which is suspected of investment fraud -- had paid 760,000 won for the leasing of a copy machine at the party leader’s Jongno-gu office for three months ending in May.

The person at Trust All who paid for the use of the copy machine is reportedly an acquaintance of the deceased.

People close to the Democratic Party leader have said that the office staff borrowed the copy machine through an acquaintance, and only learned of the acquaintance’s affiliation with Trust All through news reports.

The Seoul City election watchdog nevertheless filed a complaint against the late Lee last month, accusing him of violating the law on political funds.