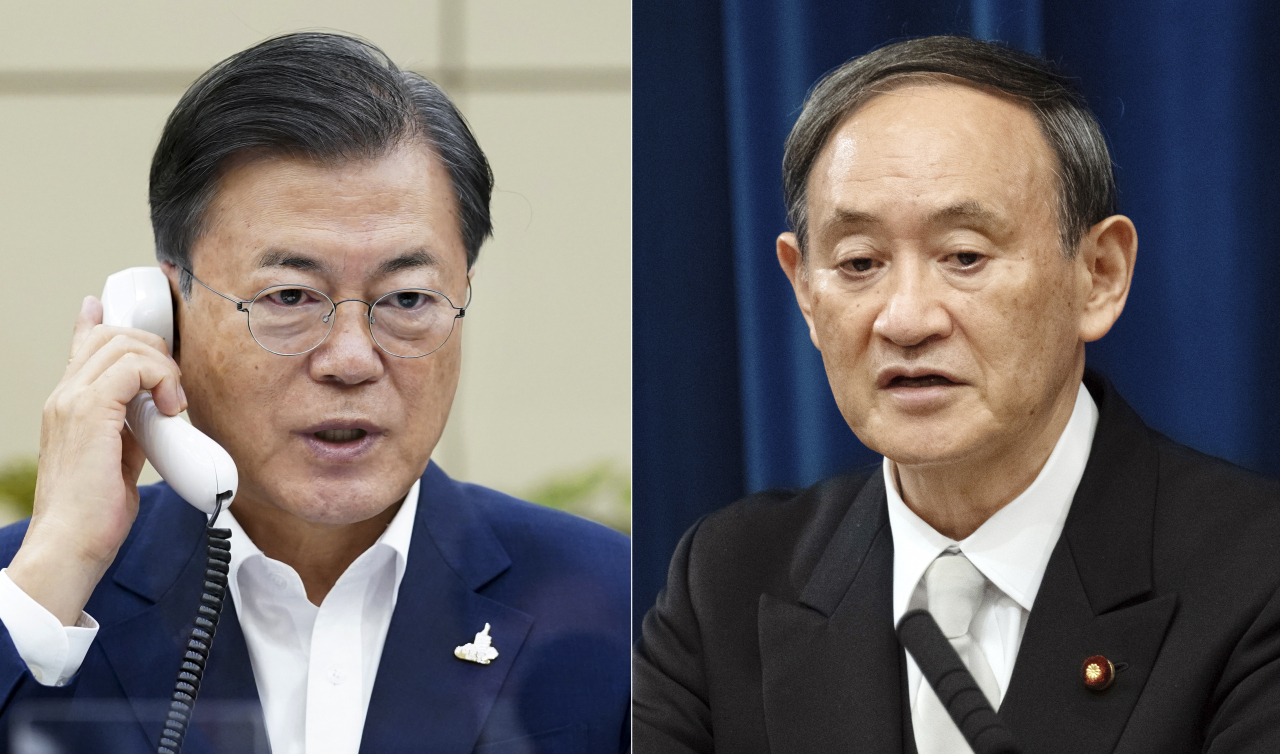 South Korean President Moon Jae-in and Japanese Prime Minister Yoshihide Suga (Yonhap)
A year has passed since South Korea decided not to scrap its intelligence-sharing deal with Japan in hopes that Tokyo would retract the export restrictions it had imposed on Seoul, but the frigid bilateral relations show no signs of thawing, even after a recent diplomatic overture from South Korea.

In August last year, South Korea decided to terminate a bilateral military information-sharing pact with Japan known as the General Security of Military Information Agreement, in retaliation for Japan’s decision to tighten export controls against Seoul in response to the wartime forced labor issue. But the planned exit from GSOMIA was postponed on Nov. 22 that year, when Seoul made a last-minute decision to retreat in response to US pressure -- and on the condition that negotiations take place with Japan on the export curbs and the forced labor issue.

Over the past year, a bilateral summit between former Prime Minister Shinzo Abe and South Korean President Moon Jae-in took place as well as working-level meetings between the two countries to resolve the prolonged dispute over damages awarded to South Koreans forced to work for Japanese firms during the country’s 1910-45 colonial rule. But the two sides are at a stalemate, with each refusing to budge.

Lately Moon has been on a mission to mend the strained relations with Tokyo, banking on leadership changes in Japan and the US as well as a planned trilateral summit with China and Japan, hoping to make a breakthrough during his less than two years left in office. Given President-elect Joe Biden’s pledge to restore US alliances with longtime allies, Seoul and Tokyo will likely be asked to settle their colonial-era disputes in the interest of closer three-way cooperation to counter China’s growing influence in the region and to deal with the denuclearization of North Korea.

A group of bipartisan lawmakers led by Rep. Kim Jin-pyo of the ruling Democratic Party also visited Japan, meeting the country’s lawmakers as well as Suga. During the trip, Kim, who heads the Korea-Japan Parliamentarians’ Union, proposed exchanges and cooperation on the Tokyo Olympics as well as in other areas to prevent bilateral relations from getting worse.

Kim said while the two leaders agree they both need to work on improving bilateral ties, Suga has reiterated that Korea needs to provide an “advanced position” on the forced labor issue, meaning Seoul needs to adjust its course and stop the liquidation process of seized Japanese corporate assets.

Chief Cabinet Secretary Katsunobu Kato said “Japan-South Korea ties are in a very severe state,” on Nov. 13, the same day Kim met with Suga, adding that Japan would continue to urge Seoul to do its part to “restore healthy bilateral relations.”

The relationship between the two Asian neighbors has been rough for decades due to Japan’s colonial past, but the conflict reached a new level of acrimony when South Korea’s Supreme Court in 2018 ruled that Japanese firms must compensate the South Koreans who were forced to work for them during World War II.

The judicial decision drew a strong rebuke from Tokyo, which insists all related issues were settled under the 1965 treaty that normalized bilateral relations.

In apparent retaliation, Japan last year slapped export controls on chemicals vital to the South Korean semiconductors industry, and still has not entirely lifted them. In response, Seoul threatened to withdraw from the GSOMIA.

With no response from Tokyo on financial reparations, a South Korean court in August began the liquidation process for a Japanese firm to compensate the forced labor victims, which could risk further aggravating the already fragile ties.

With tensions running high, it is unsure whether Suga will attend the upcoming trilateral summit hosted by Seoul later this year. Suga has reportedly notified Seoul that he will not attend the summit unless “proper measures” are taken by Seoul in regards to the wartime forced labor issue.

In addition, Japan’s impending decision to discharge radioactive water from the devastated Fukushima nuclear plant into the sea could further hurt the frayed ties.

Tokyo is expected to soon announce its plan to release into the sea more than 1.2 million tons of contaminated water it has collected since the meltdown of the Fukushima Daiichi nuclear plant, the result of the earthquake and tsunami in 2011.

Japan said disposing of the water in the Pacific Ocean was the most “realistic option,” as the storage space for the contaminated water was expected to run out in the summer of 2022.

While a Japanese Embassy official said Friday that Japan was willing to work with South Korea and other neighboring countries to monitor the discharge of water and disclose all information, this has not cooled down concern for public safety and the environment here, as the wastewater could reach South Korean waters.