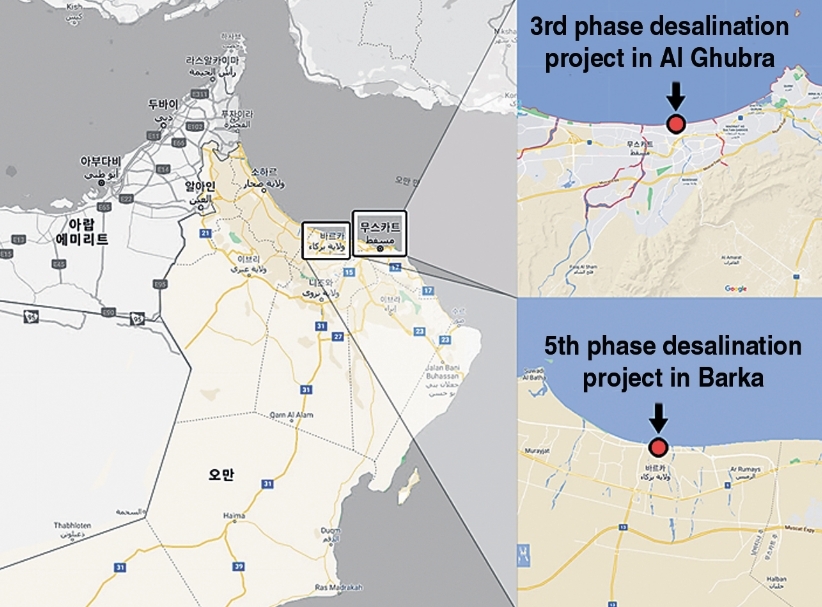 Locations of GS Inima’s desalination projects in Al Ghubra and Barka in Oman are shown on the images on the top right and bottom right, respectively. (GS Engineering & Construction)
GS Inima Environment said Sunday it has won an overseas desalination project worth 2.3 trillion won ($2.1 billion) in Oman, the biggest in the company’s history.

GS Inima will finance both projects and operate them for 20 years. The Al Ghubra and Barka projects are expected to bring the company revenue of 1.6 trillion won and 697 billion won, respectively.

GS Inima will expand the Al Ghubra desalination plant in Muscat, capital of Omen, so that the plant can process an additional 300,000 cubic meters of seawater per day by the second quarter of 2023, which is enough water for 1 million people. The current capacity of Al Ghubra plant is 191,000 cubic meters per day.

For the Barka desalination plant, which is located 60 kilometers west from the Al Ghubra plant, GS Inima will add additional capacity of 100,000 cubic meters per day by the second quarter of 2024.

“These projects are a long-term business that sells desalinated seawater at fixed price. GS Inima, which will be responsible for the financing and engineering, procurement and construction as well as the operation and the maintenance of the projects, will be able to run a stable business,” said GS E&C’s business division chief Huh Yoon-hong.