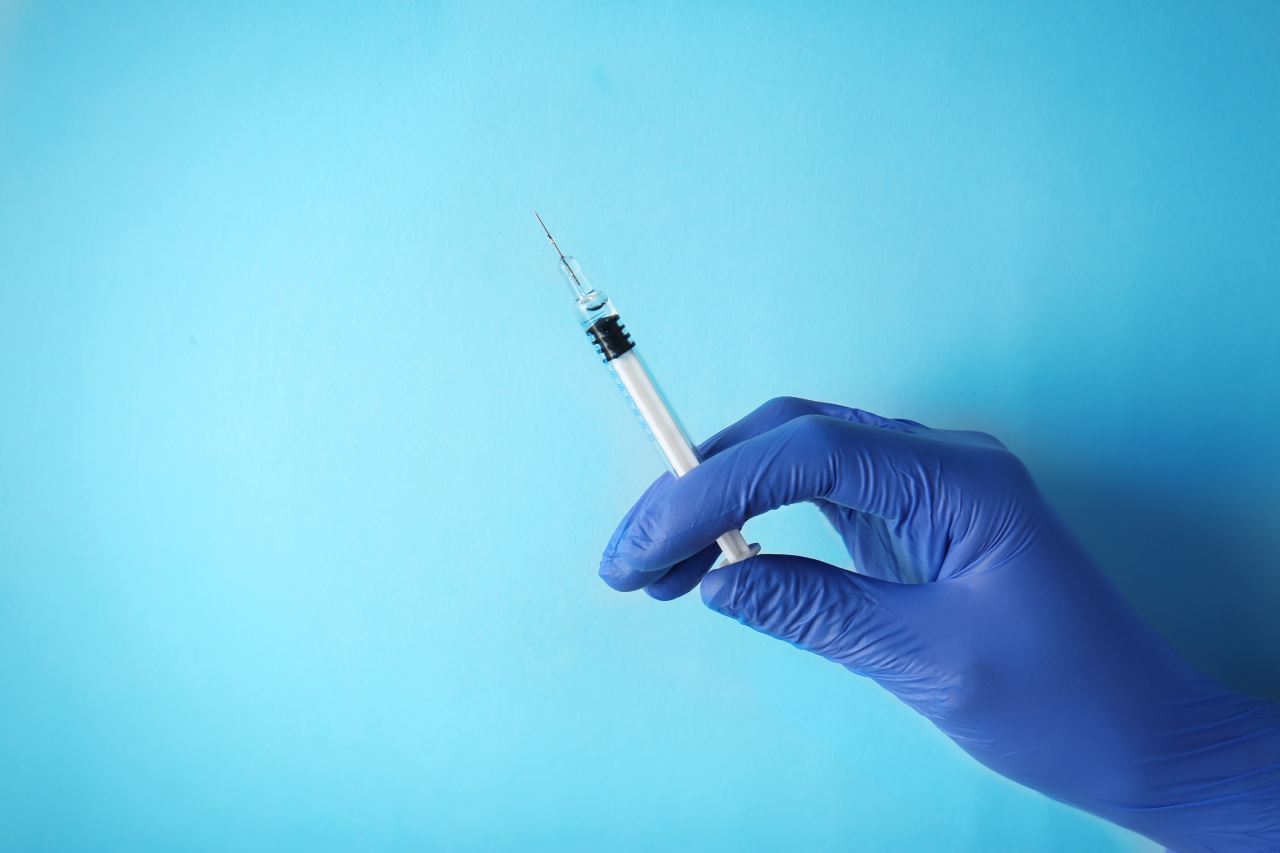 Stock photo of a hand holding up a vaccine shot (123rf)
While the development of COVID-19 vaccines makes the need to store vaccines at low temperatures increasingly urgent, South Korea is proving to be less than prepared.

When the Ministry of Food and Drug Safety and Korea Disease Control and Prevention Agency were contacted by The Korea Herald this week regarding their preparedness for cold chain supply, they each suggested that the other is responsible for it.

While government agencies work out how to delegate responsibility, individual companies such as SK Holdings and Korean Air were promoting their capabilities to aid in to the task. SK Holdings is the second-largest shareholder to a minus 80 degrees Celsius “super freeze” storage operator in Pyeongtaek, and Korean Air is ready to contract containers capable of maintaining temperatures of minus 80 degrees Celsius should the government sign such vaccine deals.

The need for an ultra-cold supply chain is a critical matter for Korean health authorities as the country scrambles to come up with a working system that would safeguard reliable distribution of COVID-19 vaccines.

The urgency is more palpable after Pfizer and Moderna each presented interim results from their ongoing phase 3 clinical trials that their mRNA vaccines have 90 percent and 95 percent protection rate, respectively.

“At wrong temperatures, mRNA vaccines’ molecular structure can fall apart,” said Ryu Wang-shick, CEO of Institut Pasteur Korea and an expert in molecular virology, in a phone interview with The Korea Herald.

“mRNA vaccines are vaccines that carry RNA genetic information. When the components are not held together the vaccine is no longer the intended drug and should not be administered to people,” Ryu said, acknowledging possibility that a compromised vaccine could even be harmful to the human body.

Regarding the different temperatures each mRNA vaccine is advised to be kept at for stable molecular formation, Ryu explained that the discrepancy appears to depend on each company’s science.

Pfizer faces the task of either arranging a worldwide super freeze cold chain system, or modify its vaccine so that it can be kept at easier-to-manage temperatures. This became more urgent for the company, as Moderna is hot on its heels with an mRNA vaccine that can be stored at minus 20 degrees Celsius. Moderna also said its vaccine could be kept for up to 30 days while refrigerated at 2 to 8 degrees Celsius.

While seeking ways to reformat the vaccine as a powder by early 2021, upon which it would only require refrigeration, Pfizer is also preparing temperature-controlled shipping containers in Michigan and Belgium, as well as some additional storage sites in Wisconsin and Germany. The company is preparing to apply for emergency use of its vaccine to the US Food and Drug Administration.

More COVID-19 vaccines are likely to arrive in the future that can be handled at room temperature. Korea is clinically testing Inovio’s and Genexine’s DNA vaccines in phase 1/2a trials here. Both can be kept safely at room temperature, but it is unclear when these vaccines might move up to, and finish, the phase 3 trials they need to pass to be approved for use.

While Korea’s special task force has expressed eager intentions to preemptively secure vaccines, at this point, it is yet to strike any deal with Pfizer or Moderna, the companies closest to producing usable vaccines. As Korea weighs options for more viable vaccines, there is currently only one facility -- Korea Superfreeze -- that is capable of storing the Pfizer vaccine in bulk.

According to SK Holdings, the second-biggest shareholder of Korea Superfreeze after US company Belstar Superfreeze, there is an international dearth of storage operators that can provide temperatures below minus 60 degrees Celsius, due to the lack of demand up until now.

To put things in perspective, a cold-chain system for fresh food products usually only requires refrigeration, with frozen goods necessitating as low as minus 18 degrees Celsius, which can often be achieved with Styrofoam and dry ice packaging.

When LNG is transformed to natural gas, it absorbs adjacent heat and dramatically lowers the temperature in the space, SK Holdings explained.

Japan is one of the few countries that has existing storage facilities. Since as early as the 1970s the country has kept ultralow-temperature warehouses to keep tuna, a popular fish for the Japanese that needs to be store at minus 60 degrees Celsius.

However, Japan has not built these freezers at a large scale because of problems associated with the country’s frequent earthquakes.

Korea Superfreeze is already being contacted by a number of local distributors who wish to form transportation partnerships.

The carrier has had CEIV Pharma certification since last year, enabling it to legitimately transport temperature-sensitive pharmaceutical products such as vaccines and insulin. There are only about 220 distribution players in the world with the certification, including 18 airlines throughout the globe. The CEIV Pharma stands for Center of Excellence for Independent Validators Pharma, and has 280 categories of evaluation to review a distributor’s proposed transportation and storage facility as well as the tools used in every step.

Korean Air has a 1,292 square meters of temperature-controlled warehouse space. Within next year, the company plans to secure an additional Cool Cargo Center the size of 1,872 square meters at Terminal 2 of the Incheon Airport. A Korean Air official told The Korea Herald that the airline can handle Pfizer vaccine, should opportunity calls for it.

According to global health authorities, there needs to be approximately 10 billion COVID-19 vaccine shots to supply the world. The International Air Transport Association has estimated that roughly 8,000 Boeing 747s will be required to handle that amount of cargo.

Asiana Airlines, another Korean carrier, also has some 800 square meters of freezer storage at the airport.

Korea’s own pursuits for COVID-19 vaccines are still in the early phases.

So far, the nation’s drug authority has only approved clinical trials for two DNA vaccines, respectively proposed by International Vaccine Institute and biotech Genexine. SK Bioscience, a vaccine maker under SK Group, has also submitted a clinical trial design for the ministry to review but is yet to gain the go-ahead.

The IVI is testing US company Inovio’s INO-4800 in Korea, and Genexine its won GX-19 vaccine. Both are in clinical phase 1/2a trials.

According to Inovio, the INO-4800 is “the only nucleic-acid based vaccine that is stable at room temperature for more than a year and does not require being frozen in transport or for years of storage.”

A Genexine official also told The Korea Herald that the GX-19 will hold together at room temperatures of 4 to 25 degrees Celsius.####

The progress is slow, however. Even though the companies were given approval for clinical trials in June, after six months there have been no reports of encouraging outcomes so far.

DNA vaccines require more research time than mRNA vaccines, as the former requires more laboratory time for cell culture while the latter is directly injected in human body to form an antigen in vivo.

And mRNA vaccines are believed to be safer than DNA vaccine, because they disintegrate overtime and leave no lingering effects in human body, Institut Pasteur Korea’s CEO Ryu Wang-shick.

While vaccine development here progresses at a snail’s pace, Korea is increasingly being chosen as the place for contract manufacturing of biologics relevant to COVID-19.

Korean company GL Rapha is to contract manufacture Russian COVID-19 vaccine Sputnik V at its plant in Chuncheon, Gangwon Province. The contract was signed on Nov. 12, the company official told The Korea Herald. According to the deal, GL Rapha will provide the 150 million doses of Sputnik V per year.

SK Bioscience is to produce AstraZeneca’s and Novavax’s recombinant vaccines and GC Pharma is to manufacture vaccines developed by global companies supported by the Coalition for Epidemic Preparedness Innovations.

However, Korea being a manufacturing location does not guarantee it doses unless specific arrangements are made between the individual vaccine developers and the government. Korea is a part of the COVAX facility, a global initiative to give every member nation an equal access to COVID-19 vaccines developed by participating vaccine companies. It is through COVAX that the Korean government currently plans to secure the coronavirus vaccine, given the relatively smaller number of confirmed patients here.

In a way, the COVID-19 pandemic has been an accelerator for research and development of novel therapeutics and the infrastructure surrounding them.

There has never been an mRNA or DNA vaccine given the final approval for commercial use by the US Food and Drug Administration.

The achievements that are being made across the world in COVID-19 vaccine development are all largely unexplored territories whose novelty calls for corresponding new infrastructure, pharmaceuticals experts said.

For the cold chain system, “When something is strongly in demand, it is sure to be supplied,” an industry insider said, hinting that once the government makes the decision on which vaccines to channel to Korea, the industry will respond accordingly.