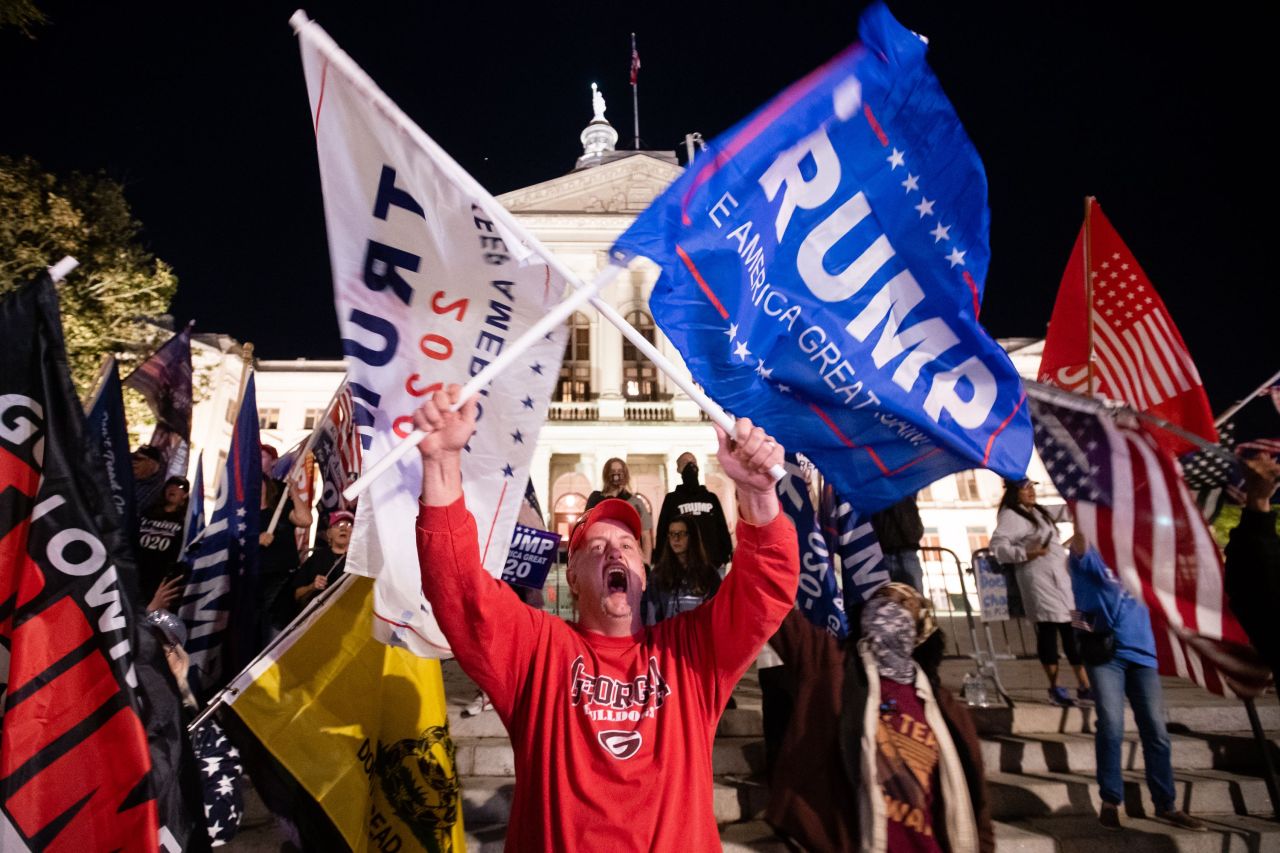 A supporter of President Trump yells at counter-protesters across the street during a rally to protest the election results outside the Georgia State Capitol on Saturday in Atlanta, Georgia. President-elect Joe Biden has been declared the winner in Georgia, becoming the first Democratic nominee to win the state since 1992. (AFP-Yonhap)
WASHINGTON (AFP) - Thousands of die-hard Donald Trump supporters rallied for a last stand Saturday in Washington, chanting "four more years" and blaming fraud for an election defeat that will force the president to vacate the White House after just one term.

Trump himself made a drive-past in his armored motorcade, on his way to play golf, smiling through his limousine window to wild cheers and signs saying "Best prez ever" and "Trump 2020: Keep America Great."

"We wanted to show our support, we're feeling they are trying to steal the election," said Pam Ross, who drove eight hours from Ohio to join the rally, referring to the president's political opponents.

The Republican incumbent is sticking to discredited claims of mass fraud and claiming he defeated President-elect Joe Biden in the November 3 vote, marking another unprecedented challenge to US democratic norms as his time in office runs down.

Later Saturday, he took to Twitter with a series of tweets and retweets that included claims of voting machines potentially being hacked and complaints about news networks' coverage of the rally.

Twitter slapped labels on at least eight of the posts as containing "disputed" information.

At least 10,000 people -- few wearing masks -- massed on the city's Freedom Plaza before marching to the Supreme Court in a raucous atmosphere reminiscent of a Trump campaign rally.

"President Trump deserves to see who's behind him, he deserves to feel the love," Kris Napolitana, from Baltimore, told AFP. "I believe that he's going to win when all the fraud and cheating is found out."

With right-wing militia group the Proud Boys among those attending, a large security presence was deployed to prevent clashes with anti-Trump events outside the Supreme Court.

As night fell, police formed lines on either side of a street leading to the White House, separating hundreds of rival protesters.

"We're just holding back people who want to fight," one officer told AFP.

After dark, groups of Trump supporters and counter-protesters clashed on the streets, scuffling and throwing punches, video posted by the Washington Post showed.

At least 20 people were arrested during the day, reports said, including four for firearm violations and one for assault on a police officer.

Trump seemed to be following the evening's events, taking to Twitter to accuse the city's mayor of "not doing her job" and calling on the police to "get going - do your job and don't hold back."

The latest vote tallies gave the Democrat Biden a clear win in the state-by-state Electoral College that decides the presidency, with 306 votes against Trump's 232. Two hundred and seventy votes are required for election.

But Margarita Urtubey, 49, a horse breeder from Miami, said the election was "so corrupt," adding, "Trump won by a landslide. We are here to march for the 'stop the steal' of this election, to make our voice heard."

Trump tweeted that "hundreds of thousands" had turned out -- while his spokeswoman Kayleigh McEnany made the greatly exaggerated claim that more than a million people were present.

But the turnout was undoubtedly high for a strongly Democratic city, boosted by protesters from around the country, from Florida to Pennsylvania to Colorado.

Darion Schaublin, who drove from Columbus, Ohio, said "the whole system's rigged... in the way that the information is getting to the people."

"The truth never actually gets out," added the 26-year-old, who said he lost his job in a restaurant after refusing to wear a mask to help stop the spread of Covid-19.

Kathlin Erickson, who said she flew from Colorado on a plane "filled with Trump supporters," kept alive hopes of a second Trump administration.

"A Trump victory? That's a long shot, but anything is possible with God," she said.

Trump is impeding Biden's transition ahead of the inauguration on January 20 and has filed numerous lawsuits -- unsuccessfully -- to challenge vote counts around the country.

He said Friday "time will tell" if he remains president, in a momentary slip of his refusal to concede defeat.

Despite his own intelligence officials' declaration this week that the election was "the most secure in American history," Trump and his right-wing media allies show no sign of giving up their quest to get the results overturned.

After driving past the marchers in Washington, Trump headed to his golf club outside the capital as he kept to his regular weekend routine.

Biden on Saturday went biking in a Delaware state park with his wife Jill and a security detail. When asked if he was closer to choosing his cabinet, he replied "yes."