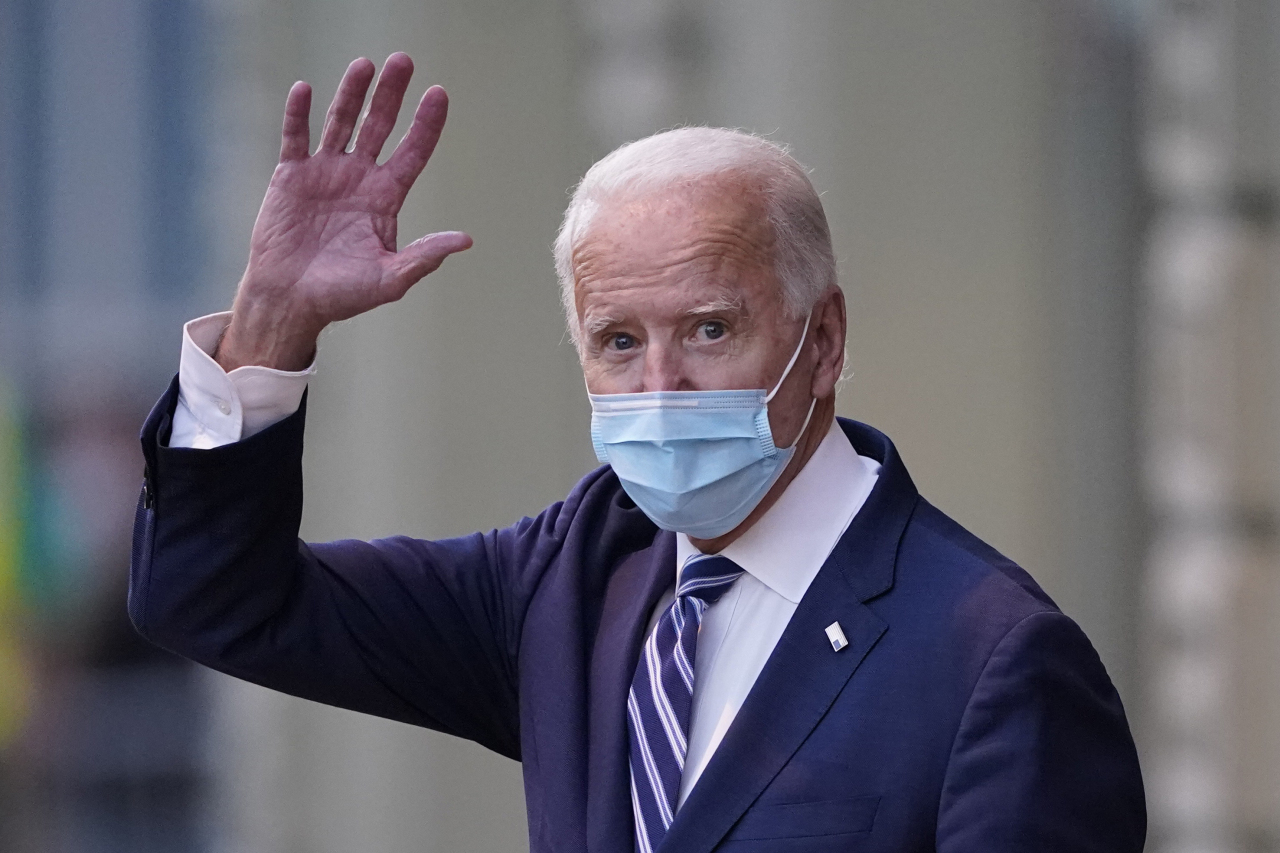 President-elect Joe Biden waves as he leaves The Queen theater on Tuesday, in Wilmington, Del. (AP-Yonhap)
WASHINGTON (AFP) -- The leaders of close US allies on Tuesday telephoned President-elect Joe Biden and pledged to work together but in an extraordinary break, America's top diplomat Mike Pompeo insisted that Donald Trump would remain in power.

"I'm letting them know that America is back. We're going to be back in the game. It's not America alone," Biden told reporters in his home state of Delaware.

The transition team said Biden planned to work with the Europeans on fighting the Covid-19 pandemic as well as climate change -- one of many areas on which Trump sharply differed with the allies.

On the call with Merkel, who has been savaged by Trump over her welcoming of migrants and Germany's modest defense expenditure, Biden in a statement "praised her leadership" and called for "revitalizing the trans-Atlantic relationship."

Johnson, who had a warm relationship with Trump, spoke for 20 minutes with Biden and wrote later on Twitter that he hoped to work with him on "building back better from the pandemic," employing the slogan from the Democrat's campaign.

All fellow leaders of the Group of Seven industrialized democracies have congratulated Biden as have some of Trump's closest allies, including Israeli Prime Minister Benjamin Netanyahu and Saudi Crown Prince Mohammed bin Salman.

US media outlets concluded Saturday that Biden enjoyed unassailable leads in major states as well as a commanding edge in the nationwide popular vote.

But Trump has refused to concede and has vowed legal challenges, saying without evidence that there was massive electoral fraud.

Pompeo, Trump's secretary of state, made clear that Trump's stance was official government policy as he brushed aside a question on whether he was cooperating with the Biden transition team.

"There will be a smooth transition to a second Trump administration," Pompeo said in a sometimes testy news conference.

He said that "the world should have every confidence" in the functioning of the US government in the run-up and after the January 20 inauguration.

Speaking later to Fox News, Pompeo commented on the congratulatory calls from world leaders to Biden, saying "if it's just saying 'hi', I suppose that's not too terribly difficult."

"But make no mistake about it, we have one president, one secretary of state, one national security team at a time."

Chuck Schumer, the top Democrat in the Senate, said Pompeo was out of touch with reality.

"We have a Covid crisis raging. We don't have time for these kinds of games."

Trump's failure to concede has no legal force in itself, but the General Services Administration, the usually low-key agency that manages the Washington bureaucracy, has refused to sign off on the transition, holding up funding and security briefings.

Pompeo was making his first public comment on the election outcome. One day earlier, Trump fired Defense Secretary Mark Esper whom he had long seen as insufficiently loyal.

Pompeo's stance will be put to the test as he leaves Friday for a seven-nation tour of allies that have congratulated Biden.

He will head first to France and then Turkey followed by the former Soviet republic of Georgia. He will then head to Israel and three Gulf Arab allies -- Saudi Arabia, the United Arab Emirates and Qatar.

Turkish President Recep Tayyip Erdogan on Tuesday became the latest leader to congratulate Biden despite the president-elect's vows to step up pressure on Erdogan, whom he has described as an "autocrat."

Russia, China, Mexico and Brazil are among the only major nations that have not congratulated Biden.

Biden, an Irish-American long passionate about peace in Northern Ireland, also spoke Tuesday to Irish leader Micheal Martin and a day earlier held telephone talks with Canadian Prime Minister Justin Trudeau, who is expected to be a close ally of the incoming president.