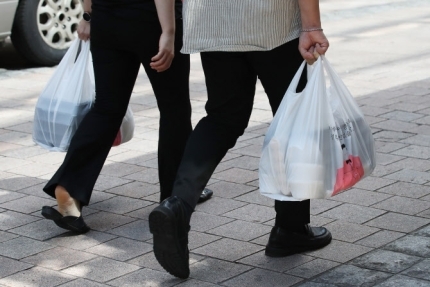 Consumers holding takeout food are seen during a lunch break in downtown Seoul earlier this year. (Yonhap)
SEJONG -- Home delivery or takeout services for cooked food have posted a remarkable increase over the past year amid fast expansion of delivery apps on smartphones as well as the social distancing in the wake of the novel coronavirus.

“Apart from consumers’ reluctance to eat at restaurants amid the COVID-19 situation, the surge in home delivery or takeout services is quite attributed to a growing popularity of mobile delivery apps, which offer a variety of dishes from restaurants in the neighborhood at a glance -- compared to the traditional orders via phone calls to a particular restaurant,” said a retail services analyst. 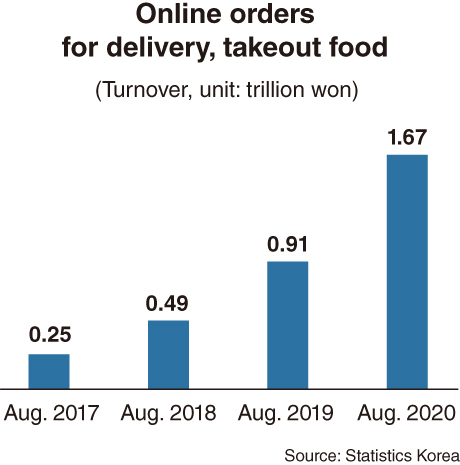 (Graphic by Kim Sun-young/The Korea Herald)
He predicted a further increase in the coming months and years, citing a 21.4 percent climb only in a month. Compared to 1.37 trillion won in July, the turnover for August rose by 295.1 billion won.

Recently, there has been a significant rise in overnight delivery services for groceries or dishes, in which consumers order at night and take the products in the early morning in front of the home door.

Including these food services, the online shopping has sharply expanded its presence in the local market over the past few years.

Total online orders reached an all-time high of 14.38 trillion won in August, up 3.1 trillion won (27.5 percent) from a year earlier.

The marked growth in online shopping has been backed by systematic parcel delivery services, which send products to consumers across the country in one to three days.

And a growing proportion of consumers were found to have purchased goods offered by department stores and large discount chains online -- often at cheaper prices than offline.

An official of the Ministry of Agriculture, Food and Rural Affairs said the data indicates that changing consumption trends like diversification of food retail services or preference for convenience food.

“Urbanites are attracted to homemade food or liquor from microbusinesses in rural areas on the back of direct deals online. The consumption trend is positive in terms of elevating the income level of farming, forestry and fishery households,” the official said.

A large portion of retailers welcome the rapid growth in online sales. A beef tripe seller at a traditional market in Incheon said she could be able to sell her well-known products on TV not only to local citizens but also to consumers across the country.

She sells products via both her own online mall and a platform offered by an internet portal operator.

But there are growing complaints among some small retailers, who are burdened with service charges for the online promotion from the portal operator as well as payment service charges from credit card companies.