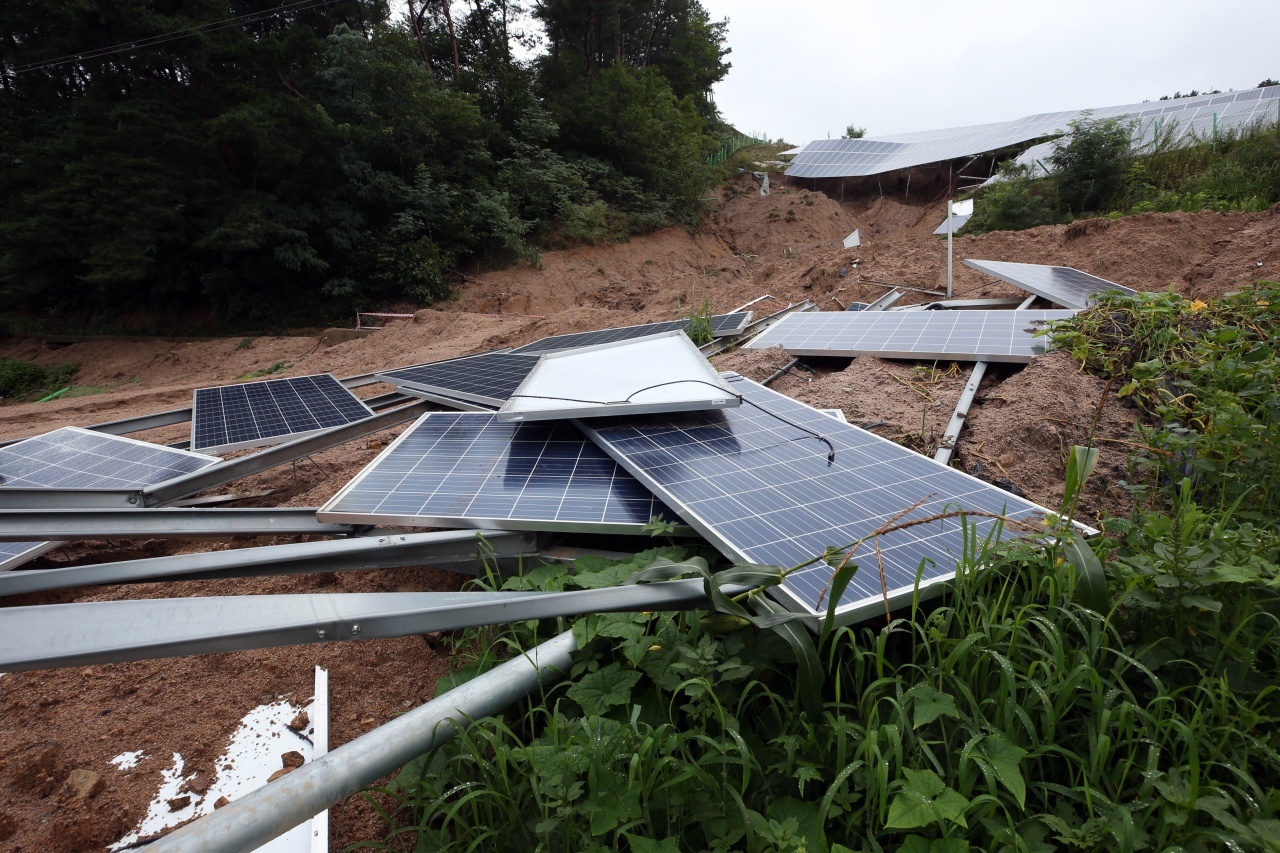 When solar panels are used for around 25 years, they are defined in Korea as being “dead.”

They are typically composed of 76 percent glass, 10 percent polymer, 8 percent aluminum, 5 percent silicon and 1 percent other metals including copper and silver. Once “dead,” they are recycled or sent to other countries for use there.

For countries like Germany that have advanced renewable energy ecosystems in place, 70 percent of dead solar panels are reused.

In step with the worldwide renewable energy initiatives, the use of solar panels in Korea has increased, and the volume of dead solar panels will consequently increase, too.

In Korea, when dead solar panels are collected, those in good shape are exported to countries such as Bangladesh, Sri Lanka, India and Pakistan for use there.

Those in poorer shape, are disassembled from their aluminum frames after which they are typically incinerated or buried underground. This is because recycling process costs much more than the income that can be generated from retrieving the metals they contain, such as silver and copper, and selling them. ­­­­­­­

Due to profitability issues, there is also only one privately run recycling center that can deal with dead panels. It’s capable of processing about 3,600 tons of panels a year, which will soon be far smaller than the amount of dead panels that will pile up.

But beyond the immediate issue of infrastructure, the industry is at odds with the government over how to impose fees on the manufacturers to share the environmental costs, and even over how toxic solar panels are in the first place.


How much to reuse?


Currently, Korea doesn’t have any clear standards or guidelines on which dead solar panels are eligible for reuse.

“Korea currently buries most of its dead solar panels underground or exports them to developing countries because there isn’t any business model to make profit by reusing dead solar panels,” a Korea Environment Corp. official said.

While the government is optimistic that the reuse rate of dead solar panels can reach around 70 percent as is the case in advanced countries, industry experts are wary.

“New solar panels demonstrate much higher performance rate than older models released a few years ago. As performance is directly related to the profitability of solar farms, it’s doubtful whether customers will prefer dead solar panels, as their performance rate will have dropped significantly after 20 years of use,” an industry source of a major solar module manufacturer said.


The Korean government is also moving to adopt regulations that has similar aims to the WEEE directive, but the approach is different.

Starting 2023, the Environment Ministry is planning to include solar panels in its recycling policy called “extended producer responsibility.”

The EPR policy will charge penalties to the manufacturers or importers of solar panels if they do not retrieve and recycle a certain percentage of dead solar panels imposed by the government.

Through the EPR policy, the ministry aims to support solar panel recycling facilities, the same way it collects penalties from petrochemical companies and uses the money to help and incentivize recycling companies that process plastic waste.

However, domestic solar panel makers criticize the EPR policy on solar panels because it imposes penalties if manufacturers don’t process a quota of dead panels based on the previous year’s production. Since the industry is growing and it takes more than 20 years for dead solar panels to materialize once they’re installed, the necessary spent panels might not be available.

“Thanks to the recent technological advancement, a solar panel’s lifespan can be increased up to 30 years. There is a difference between dead solar panels and typical wastes,” an industry source said.

According to Korea Photovoltaic Industry Association, the EPR policy will cost 2,129 won ($1.85) per kilogram for a solar panel, which weighs between 15 kg to 20 kg on average.

This would be equivalent to 31-40 percent of the panel’s price. For a 100-megawatt solar farm, which would use 6,576 tons of solar panels, the penalties would be 14 billion won.

Legally, the Environment Ministry aims to add solar panels to the EPR list by revising the Act on Resource Circulation of Electrical and Electronic Equipment and Vehicles. The current EPR list includes 23 types of electrical appliances including refrigerators, TVs, computers and washing machines.

However, Article 2-1 states that the term “electrical and electronic equipment” applies to machines and apparatus operated by electric current or electromagnetic fields. With this clause, companies argue that their solar panels, which don’t require electricity to operate, can’t be counted as electronic equipment and should be regarded as generation equipment.

“I think the Environment Ministry believes throwing out old TVs and processing dead solar panels are the same thing, which it is not,” an industry source said.

Though the ministry acknowledges that it lacks legal grounds to include solar panels to the EPR list, it emphasizes the necessity of the move, saying that Korea should benchmark the European Union which included solar panels to its EPR list in 2012.

Unlike European countries, the proportion of domestic solar panels in Korea stood at 78.4 percent as of last year, according to Korea Energy Corp. data.

“If the Environment Ministry promotes the solar panel recycling industry with the money collected from domestic solar panel makers, it will only increase their burden,” an industry source said.


In addition, the Environment Ministry and domestic solar panel makers are locking their horns over the toxicity of solar panels.

Though domestic solar panel makers acknowledged the test results, they pointed out that the ministry failed to mention that all seven types of heavy metal were detected below the levels that would class them as hazardous substances under the Wastes Control Act.

To counter the KEI report, domestic solar panel makers suggested a report conducted by Korea Testing & Research Institute, which tested solar panels in their original form, instead of grinding them up and testing them. The KTR test results showed that the solar panel samples contained substances below the water pollution standards stated in Water Environment Conservation Act, except sodium, one of the main components of salt.

Based on the KTR test results, domestic solar panel makers say their panels are cleaner than mains water, and don’t affect the environment in any way.

Above all, domestic solar panel makers criticized that the ministry misled -- even spooked -- the public by citing the KEI report, which included cadmium, which causes cancer, as one of the seven types of heavy metal for detection, even though solar panels manufactured in Korea, which are crystalline silicon panels, don’t contain cadmium at all.

According to KEITI, more than 90 percent of solar panels are crystalline silicon panels in Korea.