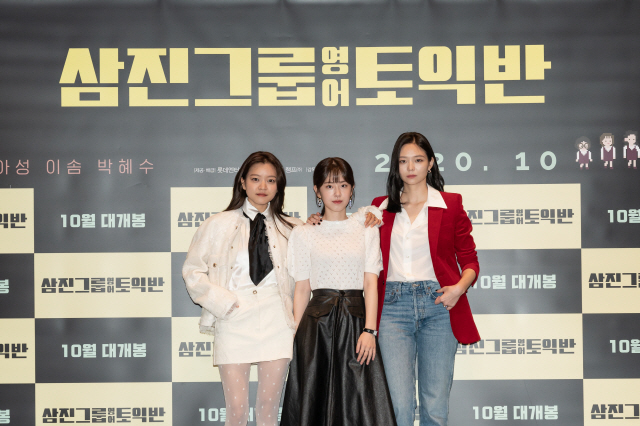 It was the ’90s vibe that director Lee Jong-pil was after in his upcoming film “Samjin Company English Class,” which captures the mood of the country when it was on the cusp of globalization.

The year is 1995. The three women have been working at the company for eight years and are better at their jobs than anyone else -- but without college diplomas, they constantly get passed over for promotions.

Then the company announces the start of an English class. Employees who attain a score of 600 or higher on the Test of English for International Communication are now being offered promotions. The plot takes a twist as the three employees, who are taking the same English class, find out about corruption inside the company.

The director pointed out that the movie includes music by Zam, a mixed-gender band that was popular in the ’90s, along with makeup and clothing that were in style at the time.

“I tried to make the scenes as realistic as possible,” Lee said Monday during a press conference. “For example, these days we have screen doors on subway platforms, so after saying goodbye we start focusing on our own smartphones. But in the ’90s we could watch friends on the other side of the platform and become emotional. I tried to show that in the movie.”

“The subway platform went under construction a day after we shot that scene. I cried a lot after that scene because I felt sad about the fact that the last subway platform with a ’90s vibe was disappearing,” Ko added. Ko was born in 1992.

“I also found out through researching some of the interviews done at the time that there is a unique accent that was used in the ’90s and practiced it,” E added. In fact, the actors were born in the early 1990s and have very few memories of that decade.

During the press conference the three actors also mentioned how close they had grown, the result of living together during filming.

“I chose this movie because I thought that it would be fun to do a movie with a ’90s background. Also, I was excited to work with actors around my age,” E said. “We concentrated on working when on the set and when we came back to our room, we hung out as friends.”

“There was a time when E Som prepared all the ingredients and made us pasta after work. That was the most delicious pasta ever,” Park added.