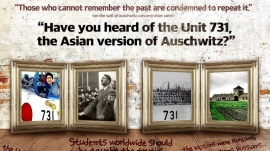 The Voluntary Agency Network of Korea, a nongovernmental diplomatic body active online, said Thursday that it would roll out a campaign to raise international awareness about the Japanese Imperial Army Unit 731.

Stationed in China’s Harbin during the World War II, Unit 731 conducted inhumane experiments on thousands of living people for its biological warfare development, including vivisection on prisoners of war.

Under the title “Have you heard of the Unit 731, the Asian version of Auschwitz?” VANK’s campaign poster cites the famous quote inscribed on the Auschwitz Concentration Camp: “Those who cannot remember the past are condemned to repeat it.”

Featured images include a photograph taken in 2013 of Japan’s chief cabinet secretary Shinzo Abe, sitting in the cockpit of a plane that has 731 written on its exterior and a group photo of the unit’s members.

To introduce the rarely visited part of history to the global community, the organization created posters in Korean, English and Chinese, which will be published via social media.

Aside from efforts to raise publicity, VANK added that it will file an English petition through change.org, the world’s largest platform for petitions, asking the US and Japanese governments to release relevant information regarding the unit's antihumanitarian crime.