[News Focus] Half of citizens in Seoul, Gyeonggi disapprove of Moon

More Koreans in 30s withholding support for the president: survey 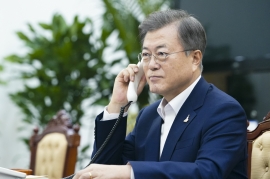 SEJONG -- President Moon Jae-in has lost popularity in Seoul, Gyeonggi Province and Incheon, as well as in the country’s southeastern Yeongnam area, seemingly due to fury over the government’s real estate policies.

According to a poll conducted in the fourth week of July by Gallup Korea, 1 out of 2 residents of Seoul and the surrounding areas responded that Moon was “not doing well.”

The survey showed that 50 percent of the respondents in Seoul and 52 percent of those in the region comprising Gyeonggi Province and Incheon expressed disapproval of the president.

His approval ratings in the capital and Gyeonggi-Incheon posted 44 percent and 41 percent, respectively. The number of residents in the three areas collectively exceeds 26 million and accounts for 50.1 percent of South Korea’s population.

While the figures for Jeju and Gangwon provinces were not made public due to inadequate samples of the provinces’ relatively low populations, Moon’s approval ratings only outstripped disapproval ratings in the Honam and Chungcheong areas. Honam refers collectively to Gwangju and South and North Jeolla provinces, whereas the Chungcheong region comprises Daejeon, Sejong as well as North and South Chungcheong provinces.

Nonetheless, the numbers were almost evenly split in the Chungcheong region, with 46 percent approving of the president’s performance and 41 percent disapproving. 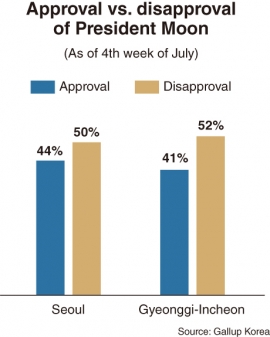 Of Moon’s critics nationwide, a dominant portion -- 35 percent -- based their negative assessments on his real estate policies. A further 12 percent said he had shown a lax performance in economic affairs affecting people’s livelihoods, and 11 percent said he was incompetent overall.

Alongside record-high property prices, a variety of regulations -- including tough mortgage rules, imposed by the government since May 2017 -- have de facto blocked ordinary households from purchasing apartments in Seoul.

In addition, the huge burden of the capital gains tax on owners of multiple homes has resulted in a housing shortage, as many have opted not to sell under the incumbent administration.

A similar situation can be seen in some satellite cities in Gyeonggi Province, which surrounds Seoul.

A noteworthy finding was that the disapproval rating for Moon among those in their 30s climbed to 44 percent, only 5 percentage points less than his approval rating (49 percent).

Voters in their 30s -- particularly women born in the 1980s -- had been regarded as Moon’s most faithful supporters.

Currently, ordinary households led by people in their 30s -- excluding young people who receive huge amounts of financial support from their parents -- are regarded as the primary victims of spiraling apartment prices.

They lack the financial capacity to buy expensive homes. The lottery system to acquire newly built apartments frustrates them as they tend to score low.

Even if they were to win the lottery, many people in their 30s would still be at a disadvantage due to government rules allowing low percentage of mortgages but requiring higher portion of cash.

Ultimately, wealthier people with huge cash reserves, who had not been eligible for the lottery, could end up having the exclusive right to buy new apartments. As a result, the government has been criticized for allowing rich people in their 60s to buy their children expensive apartments in Seoul.

According to the National Barometer Survey, jointly conducted by four pollsters and publicized July 28, 71 percent of those surveyed expressed discontent with Moon’s real estate policies. Only 21 percent were happy with them.

Further, 38 percent of the 1,000 people sampled said the president’s policies were “very wrong.”