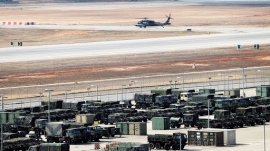 South Korea and the United States plan to use an upcoming combined exercise to better prepare for Seoul to regain wartime operational control of its forces from Washington and to maintain their joint readiness posture, Seoul's defense ministry said Tuesday.

It is the first time that the government has confirmed the two countries will stage a major annual exercise this summer, which has drawn keen attention following the cancellation of their springtime one due to COVID-19.

"During the 2020 combined exercise, the two sides are pushing to carry out a Full Operational Capability (FOC) test by applying the future command structure," according to the ministry's document presented to the parliament's National Defense Committee on Tuesday.

"By conducting important leader development trainings and education for officials, we also aim to maintain the Fight Tonight readiness posture and to guarantee conditions for the FOC test," the ministry added.

The South and the US have differed over how to program the exercise, with Seoul calling for a focus on the FOC test and the US maintaining it should focus on ways to boost their joint posture as a replacement of the springtime training.

Asked when the exercise would be staged, Minister Jeong Kyeong-doo told lawmakers that Seoul and Washington are "eyeing around mid-August, in consideration of diverse factors."

Sources have said that the computer-simulated command post exercise will be held in an adjusted manner in consideration of the new coronavirus situation.

"U.S. service members cannot come to South Korea at a normal level (due to the coronavirus), and those who arrive here need to be quarantined. We will find the optimum way under the current circumstances," Jeong said.

Upon arrival, US personnel will undergo virus tests twice, and only those who test negative will take part in the exercise, he added.

The planned FOC test is meant to verify if Seoul is on course to meet the conditions for the envisioned OPCON transition.

During the summertime exercise held in August 2019, Seoul and Washington conducted an initial operational capability (IOC) test, and their defense ministers decided to move on to the FOC test.

Following the FOC test, the allies will carry out a Full Mission Capability (FMC) test.

The Seoul government seeks to retake OPCON under the current Moon Jae-in administration, whose term will end in May 2022, though the transition is not time-based but conditions-based.

The conditions for the transfer are Seoul's capability to lead the allies' combined defense mechanism, its capacity for initial responses to the North's nuclear and missile threats, and a stable security environment on the peninsula and in the region.

Asked about the chances of the OPCON transfer missing the Seoul government's target date, the minister said Seoul "would need to accept inevitable situations," including a possible modification to the plan.

Last year, the two sides agreed to name a separate Korean four-star general to lead their envisioned future joint command, rather than having the chairman of its Joint Chiefs of Staff or chief of the Ground Operations Command double as the chief of the South Korea-US Combined Forces Command (CFC).

Currently, a four-star US Army general helms the CFC. After Seoul retakes OPCON from Washington, a South Korean general is supposed to command the CFC. (Yonhap)