2020 World Heritage Festival to kick off on Friday 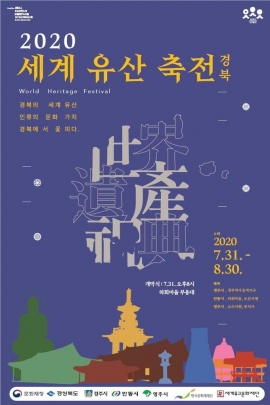 The second part of 2020 World Heritage Festival, jointly hosted by the Culture Heritage Administration and North Gyeongsang Province government -- which will run until Aug. 30 -- will start Friday with an opening ceremony at Hahoe Village, Andong.

The organizers said special events will take place mainly in three locations in North Gyeongsang Province-- Gyeongju, Andong and Yeongju -- in August. Adding that modern technologies will be used for the event.

For instance, the exhibition in Andong will present World Heritage-related media art created using projection mapping, which is a projection technology used to turn objects into a display surface for video projection. It also added that the media art exhibition in Gyeongju will present a 360-degree and 3D video of the seated Buddha statue in the Seokguram Grotto, which was designated as a UNESCO World Cultural Heritage Site in 1995.

Along with the special exhibitions, diverse performances and experience programs will be available.

In Andong, a music concert based on 12 traditional three-verse poems written by Joseon-period Confucian literati Yi Hwang will be performed. The traditional mask dance drama, Hahoe Byeolsingut Talnori, reinterpreted into a modern dance will be staged. Participants of the festival in Andong can also experience a day in the life of seonbi, or scholars of the Joseon era. In April this year, the CHA applied for the addition of 18 different kinds of talchum, including Hahoe Byeolsingut Talnori, to the list of UNESCO Intangible Cultural Heritage list.

In Gyeongju, the performance of traditional instruments, which appear in poems written by the renowned Silla period (57 BC-AD 935) author Choi Chi-won, will be held. Participants can also enjoy a fashion show that presents diverse clothing, including traditional clothing from the Silla period and garments made with hanji (Korean traditional mulberry paper).

In Yeongju, a dance performance inspired by Buddhist philosophy and a choir’s performance about the Buseoksa Temple’s beauty will be presented. Buseoksa Temple is one of the seven Buddhist mountainside temples that were added to the UNESCO World Heritage list in 2018. The organizers will also hold an exhibition of items used by the seonbi of the Joseon era in Yeongju.

The CHA added that it will comply with the Health Ministry’s rules on social distancing during the festival. Visitors must wear masks and make reservations in advance.