Infantry fighting vehicle Redback, developed by Hanwha Defense for the Australian Army, makes its public debut at a rollout ceremony in Changwon, South Gyeongsang Province, July 24, 2020. Australia will make a final offer on the Korean-made vehicles by late 2022. (Yonhap)

The Australian military will decide whether to make a final offer on the Korean-made vehicles by late 2022, after testing them from November to August next year.

The Redback is one of two candidates on the short list for the country’s Land 400 Phase 3 project to introduce some 400 new tracked armored vehicles. Hanwha signed a $50 million risk-mitigation activity contract with Australia in October to provide three prototype vehicles for tests and evaluations. The other contender is Germany’s Rheinmetall Defence.

If Hanwha clinched the deal, it would be a first for Korea, which has never exported critical military equipment to a key military power. Korea has previously exported army vehicles to Malaysia, but only in small numbers. A successful bid is also expected to boost Korea’s chances for a US project to replace Bradley Fighting Vehicles, for which bidding is set to open early next year.

The two Redbacks will arrive in Melbourne late next month, departing from the Pyeongtaek Port in southwestern Gyeonggi Province. A third vehicle may be sent there by January next year, depending on how the assessment process unfolds in Australia.

The Redback, named after a highly venomous spider found in Australia, has unmatched strength in defense capabilities and mobility, a Hanwha official said. 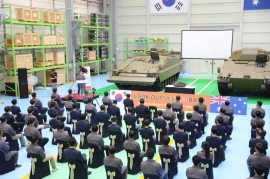 Infantry fighting vehicle Redback, developed by Hanwha Defense for the Australian Army, makes its public debut Friday at a rollout ceremony in Changwon, South Gyeongsang Province. Australia will make a final offer on the Korean-made vehicles by late 2022, after military testing. (Hanwha Defense)

“There is no doubt that the Redback goes beyond the level of defense capabilities the Australian Army had originally requested,” the official said.

The 40-ton Redback is capable of carrying 11 people -- three crew members and eight foot soldiers -- with a maximum speed of 65 kilometers per hour. It also features the advanced In-Arm Suspension Unit, which affords greater flexibility to drive in different directions.

The Korean-made vehicles run on rubber tracks rather than the usual steel, and are put together with the latest technologies to reduce vehicle weight as much as possible for freer, more rapid movement, according to Hanwha.