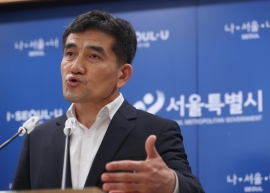 The Seoul City government, law enforcement agencies and a rights watchdog on Wednesday vowed to leave no stone unturned on the sexual harassment allegations against late Mayor Park Won-soon and speculations surrounding the matter.

The Seoul Metropolitan Government said it will set up a team comprising city officials, civic group representatives and legal experts to clarify the truth about the allegations raised by its staff member against the mayor.

“To guarantee fairness and objectivity, we will set up a civilian-government joint investigation team in which external experts such as women groups and experts on human rights and law will take part,” the Seoul City government’s spokesperson Hwang In-shik told reporters during a briefing session Wednesday.

Details, including the selection process of team members, duration and scope of the probe, will be determined later following consultations with the groups, he said.

The effectiveness of the team, however, has faced skeptical questioning from the public due to the absence of investigative rights, which enables the team to force people involved in the case to cooperate with the probe.

The decision came after a former secretary and current city government official who worked with Park claimed Monday that the mayor made unwanted physical contact and sent inappropriate text messages over four years, starting in 2017. She filed a criminal complaint with the police two days before Park was found dead in Seoul on Friday.

The city government came under fire after the alleged victim said that her requests for help concerning Park’s misconduct had been snubbed by other officials.

“The employee hasn’t officially told the Seoul government about the damages she faced yet,” Hwang said.

Lim Soon-young, special adviser for gender equality to the mayor, allegedly asked Park if he was involved in a “scandalous event” before the former secretary filed the complaint, according to a local broadcaster on Tuesday.

“That’s something that can only be confirmed by the special adviser. … It will be clarified by the investigation team,” Hwang said.

The city government vowed to set its priority on protecting the victim from personal information leakage, defamation and insults. Stern disciplinary actions will be taken on public servants working at the office if they are confirmed to have inflicted damages against her.

Counseling and psychological treatment will be provided to help the victim get back to her normal life.

The Seoul Seongbuk Police Station continued their inquest into Park’s death on Wednesday, calling in Koh Han-seok, chief of staff for the mayor, for questioning that lasted three hours. Koh had visited Park’s residence on July 9 morning just hours before he went missing. The station will also conduct a digital forensic analysis on the late mayor’s cellphone and look at his call history.

The Seoul Metropolitan Police Agency is working on another complaint filed by the victim on defamatory content and false statements made online.

Prosecutors are expected to begin their probe as at least two complaints filed by civic groups against Cheong Wa Dae, police and the Seoul City government over a possible leakage of information that Park had been accused of sexual harassment.

The ruling Democratic Party of Korea leader Lee Hae-chan, a longtime friend of the late mayor, ruled out the possibility that the party could initiate an inquiry due to the death of the alleged perpetrator and asked the Seoul City government to carry out thorough investigation as the victim wished.

For its part, the party will come up with measures that could prevent inappropriate behavior of government officials belonging to the party and revise party rules to strengthen gender sensitivity education for members.

The People’s Solidarity for Participatory Democracy, a nonprofit civic group founded by Park and others in 1994, urged the Seoul Metropolitan Government to pursue a fair investigation, while expressing sympathy and support to the victim.

“An approach that centers on recovery of the victim’s rights should be taken,” the group said in a statement released Wednesday.

The group said the city government should put off dismissing employees who need to undergo investigation. Some 27 people, who were hired by the mayor to take positions in special service, were removed from office after Park’s death.

The National Human Rights Commission of Korea, an independent governmental body, allocated the case to an investigator following a petition lodged July 10 by a civic group to investigate possible rights violations that Park’s secretary may have faced by Park and other officials at the city office.