[Feature] Being a foreign student during COVID-19 pandemic 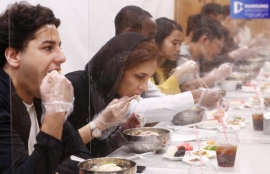 Foreign students eat ginseng chicken soup, known as “samgyetang," at an event to mark Korea’s Chobok, which is traditionally thought of as one of the hottest days of the year, at Seoul's Hansung University in July last year. (Yonhap)

The COVID-19 was an unexpected twist that has profoundly changed how we live in South Korea. But for foreign students seeking to make most of their time here, the coronavirus is the ultimate unwelcome guest.

Maria Sanchez, a 23-year-old student from Colombia, arrived in Seoul on Feb. 27 at the peak of the first wave of the novel coronavirus outbreak here when the virus caseloads were rising by hundreds daily.

“My family and friends were worried about me because at that time the situation here was bad and they told me not go to Korea,” said Sanchez, who is to begin her masters’ program at Hankuk University of Foreign Studies in September.

But she couldn’t let go of the opportunity not only to gain experience studying abroad, but also to reconnect with her grandfather, who fought in the 1950-53 Korean War.

“It was the best decision I have ever made,” said Sanchez, who came here on a Korean government scholarship.

While feeling relieved about the virus situation here, which is better than that of her own country, Sanchez can’t help but feel anxious about the time passing by without her exploring local culture, meeting new people and learning new things about Korea.

“My daily routine is to go to a class and come back home,” she said, explaining how social distancing and other virus prevention measures in place almost everywhere she goes restricts her from interacting with fellow students and making new friends.

Unlike many other students whose learning had been moved to online platforms, she still attended school – after a fever check, having her hands sanitized and with a mask on during the entirety of the class.

Zeynep Demirezer, a 21-year-old Turkish student who spent her entire semester at a Korean university online and is now back in Turkey, says her whole experience as an exchange student in Korea comes down to the pandemic. She even got tested for the virus for having been to a club in Itaewon in early May and had to self-quarantine for two weeks.

“I did not mind having to follow social distancing rules and take online classes, but I and other exchange students (from my school) could not meet anyone but each other,” she said, referring to her limited experience in interacting with Koreans and learning about Korean culture. “It was as if I was on an international school camp.”

“If I came earlier, I would have had much more fun and got to know Korea more,” said Demirezer, who returned to Turkey earlier this month after spending a semester at Myongji University. “It is unfortunate to be an exchange student under this circumstance, but I am still grateful and liked my experience.”

Many Korean universities moved their classes entirely or partially online, which subsequently raised concerns about a lack of infrastructure, a poor quality of education and cheating on exams. This also led to Korean students demanding a refund of their tuition.

“We started our semester two weeks later than usual with online classes. Since it was the first time to take online classes, it was quite awkward at the beginning, mostly because we couldn’t have discussions and conversations during classes,” said Vokhidjon Kakhramonov, an Uzbek student at Korea University.

“However, we got used to it and began to take offline classes in the second half of the semester,” the 25-year-old said, adding that his learning experience was satisfactory overall despite the restrictions in place.

“I don’t know how good the online classes are in other places. But if the quality is the same as my classes, I don’t think the refund is necessary. Professors conducted regular classes in classrooms. The only difference is that they broadcast their lessons and that’s all,” he said.

Kakhramonov said one of the difficulties at the beginning was to buy a mask.

“We couldn’t buy masks from pharmacies because of the lack of a national health insurance number.”

Now, another difficulty is that international travel is almost impossible.

“I missed my family so much and wanted to go back to my country this summer. But I couldn’t find plane tickets,” he said. Being under self-quarantine for two weeks upon arrival at Uzbekistan and another two weeks upon his return to Korea is also a burden. “It means I lose one month.”

As Korea grapples with a continued influx of infections coming from overseas, the government made it mandatory for all international arrivals to self-quarantine for two weeks on April 1 and it is toughening its rules to dissuade unnecessary international travel.

Those coming from “high-risk” countries with a high infection rate are required to submit proof that they tested negative for the virus before getting onboard flights for Korea, for example, starting Monday.

Nonetheless, Janet, a German student who returns home on Monday, recalled her experience as a happy one despite the pandemic.

“I would say that not much has changed before and after the pandemic broke out in Korea, the country handled it very well and got it under control. I was able to live my life in Korea normally, which I am very happy about,” she said.

“When I compare it to other countries where exchange students were sent back home from their university and have to study online under lockdown, I am happy to live here.”

As of April 2019, there were about 160,165 foreign students in the country, according to the Korean Educational Development Institute. The majority of them, or about 91 percent, came from Asia, with China sending most students (44.4 percent). There is no available data yet for this year.