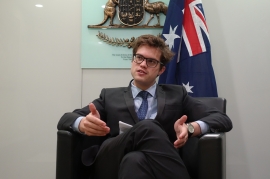 In South Korea, known for its education fervor, the English widely taught at schools and private institutes is American English.

Challenging the US dominance in the Korean English education market is one of the tasks facing the Embassy of Australia here, an Australian diplomat told The Korea Herald.

“Australia wants to make clear to Koreans we should be the destination of choice for people who want to study English language,” James Bourne, second secretary at the Embassy of Australia, said during an interview at his office in the Australian Embassy in central Seoul.

As part of the public diplomacy efforts, the Australian Embassy recently co-hosted an English speech competition in the first such attempt together with Herald Corp., which publishes 67-year-old English-language daily The Korea Herald.

“We saw this competition as a great way to advertise to Koreans that Australia takes English language incredibly seriously and we are world class in teaching it,” he said, boasting of Australia’s wonderful living environment -- the climate, beautiful nature and friendly people.

Korean students he judged at the speech contest were as good as Australian students he had judged back home in terms of their style, presentation and ability to formulate arguments with real passion, he said.

In that many Korean students spend fewer hours than Australian students outside academic studies, he said, “there is a part of me that does feel sorry for Korean students.” But that may be a sacrifice for ambitious Koreans seeking to succeed not only here but also outside the borders of Korea, he said.

For now, Australians do not seem as visible as others from native English-speaking countries in Korean society, but he expects steady growth in people-to-people exchanges between Korea and Australia.

Korea is becoming a far more attractive market than its neighboring Asian countries among Australians, he said, on the back of the growing popularity of Korean culture ranging from Korean pop culture to Korean beauty products.

“Australians that I talk to increasingly love Korean culture. They want to come over here and experience its lifestyle,” he said.

Last year, some 187,000 Australians visited Korea and 249,000 Koreans visited Australia. Korea is Australia’s seventh-largest source of international students, with 21,800 Korean students studying in Australia in 2018. Korea is also the fourth-largest group of working holidaymakers and tenth-largest for short-term visitors to Australia.

Asked about Koreans’ concerns about racism against Asians in Australia, Bourne assured that it is still extremely safe to travel to, study at and stay in Australia, which he said is a successful multicultural country.

“The Australian government has zero-tolerance approach to racism,” he said, adding the reported cases of racism are “isolated” and the government is trying to address the problem.

“I think one way to address that is to continue to work hard on building the people-to-people relationships between Australians and Koreans,” he said. “The more relationship we build, the better you can tackle racism.”

Hosted by the Embassy of Australia and Herald Corp., the 49th Herald National English Speech Contest was held online in March, with participation open to elementary, middle and high school students here.