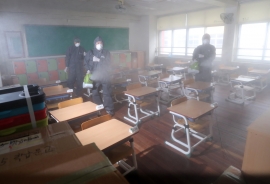 Two elementary students tested positive for the coronavirus on Tuesday, health officials said, in the first spread of the virus in a school in South Korea.

The infections came after fifth graders in the central city of Daejeon came into close contact with a classmate, a COVID-19 patient, who tested positive Monday, health officials said.

Local authorities had carried out tests on all 25 students who were in the same classroom as the first COVID-19 patient who attended school between June 22 and 24.

Earlier Tuesday, South Korea added 43 cases, including 23 local infections, raising the total caseload to 12,800, according to the Korea Centers for Disease Control and Prevention (KCDC).

Still, the two infections in Daejeon were not included in the official tally. The KCDC is set to update the official numbers on Wednesday morning. (Yonhap)