Webtoon ‘The Sound of Your Heart’ ends in 14 years 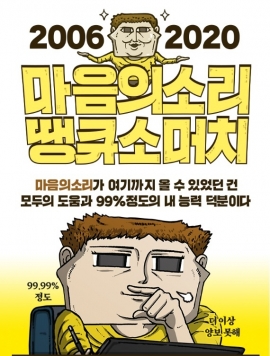 “The Sound of Your Heart” (Naver Webtoon)

South Korea’s longest running webcomic series “The Sound of Your Heart” by illustrator Cho Seok has come to an end after 14 years.

Officially launched on internet portal Naver’s webtoon platform on Sept. 8, 2006, the webcomic -- known as “The Sound of Heart” in Korean -- ended Tuesday with its 1229th episode.

“I feel lucky to be able to feel ‘done’ with the comic,” the 37-year-old cartoonist said in the final episode, adding words of gratitude to all the readers who have laughed with his stories. “I was able to complete a single webtoon over 14 years’ time thanks to everyone. I will work on other stories, always remembering this feeling.”

Starting with Cho’s daily experiences during the mandatory military service and episodes from his part-time job, the comic mostly drew the semi-autobiographical story of the author in an omnibus style. Each episode was brief and the stories never special, but Cho’s humorous narratives and easily relatable contents kept the series at the top five spot on the chart through the years.

According to Naver Webtoon, “The Sound of Your Heart” was one of the most popular comics on the platform, racking up an accumulated readership of almost 7 billion views and 15 million comments so far. More than 500 episodes of the series have also been translated into English and posted on the Naver Webtoon English website since August 2014.

The Naver affiliate also added the comic has been one of the most well-rated thanks to Cho’s diligence. While some of the authors find it hard to keep up with Naver’s strict deadlines, Cho was never late and never skipped an episode without prior notice, the company said. Cho took a three-week holiday in March 2018 for the first time since the webtoon’s launch in 2006, followed by a five-month official hiatus from the series in July 2018 due to health concerns.

Fans and readers left around 40,000 comments as of Tuesday afternoon at the bottom of last episode. One of the comments with the most likes read, “The webtoon has been a part of my life. I would always end my Monday with it and it was a reason why I looked forward to ending my weekend.”

Cho has also published other webcomics, such as “Jo’s Area” (translated title) and “Moon You,” on Naver even as he continued to post episodes for “The Sound of Your Heart.”