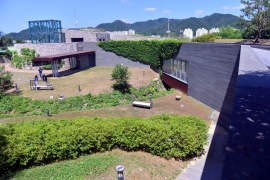 The following is part of a series that explores museums dedicated to the well-known Korean contemporary artists whose names they bear. --Ed.

Driving through a winding road in Yanggu County in Gangwon Province, the Park Soo Keun Museum slowly comes into sight. Surrounded by granite, the museum lies low to the ground as if representing the humble personality of Korea’s representative modern artist Park Soo-keun.

The granite pieces that surround the museum are familiar objects here as they are easily found in palaces, old temples and traditional Korean homes alike in rural areas. Visitors feel a sense of warm comfort strolling around the museum.

The museum reflects the characteristics of Park’s paintings as well, which are famous for his unique matiere technique that imparts physical texture to a painting, which he developed throughout his life; his paintings look as if they were drawn on granite.

“I feel indescribable beauty in our country’s old stone works such as stone pagodas and stone Buddhas,” Park once said. 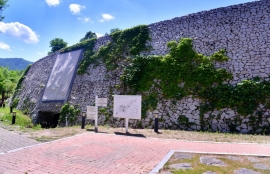 When it comes to painting, Park always used a brush and painting knife together. Using a painting knife, Park layered oil-mixed white and light brown hues on the canvas and let it dry for a while, a process he repeated several times. Park then boldly sketched on the canvas in black.

“He grew up in this country and was exposed to rocks on the beach in Gangwon Province. Since he grew up in a poor farming family, he used to draw on the dirt ground when he was little. Such experiences might have affected his unique matiere technique,” Park In-sook, Park’s daughter and the museum’s honorary director who goes by her pen name Doi, told The Korea Herald during an interview at the museum on June 11.

“The repetitive layers of white and light brown colors are also reminiscent of doenjang (Korean soybean paste) due to the unique color. His paintings feel like a warm embrace of mother,” she added.

The warmth of his paintings also derive from the subjects such as vendors at a street-side market, women washing clothes at a stream and a mother in hanbok feeding her baby -- typical scenes back in the days. 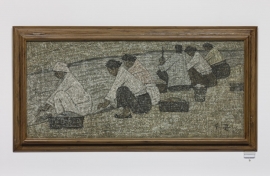 “My father was a very warm-hearted and sympathetic person,” Doi said. “One day he went to a street market to buy apples with my mother, and she found him buying an apple from each vendor. When asked the reason, he said, ‘I felt like I have to buy evenly from all the sellers,’” Doi said, recalling a story she had heard from her mother.

Born in 1914, Park lived through the 1950-53 Korean War, which divided the country. Park was an artist who greatly empathized with the sorrow of those who lost their families and homes during the war.

Park also lived through the Japanese colonial era (1910-45). While many modern artists studied in Japan where they were exposed to Western paintings, Yanggu Elementary School was his only formal schooling. Park found his originality on his own and his talent was recognized when his work was selected for an exhibition at the 11th Joseon Art Fair in 1932, the top art fair of the time. In 1939, he was awarded a prize at the same art fair. 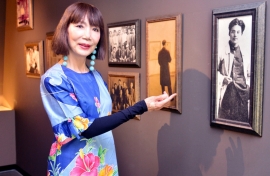 Park met novelist Park Wan-suh in 1952 at the US 8th Army post exchange at Donghwa Department Store (now the Shinsegae Department Store main branch) where the painter was making a living by painting portraits of US soldiers, sometimes on a handkerchief, to be sent back home, and where Wan-suh worked as a clerk. The meeting would eventually lead to posthumous fame for the painter.

Wan-suh published her debut novel “The Naked Tree” in 1970 based on her experience at the post exchange. The novel, which revolves around characters based on herself and Park, became a critically acclaimed bestseller for its keen portrayal of the post-Korean War era. The title of the book was inspired by serial paintings of bare trees by Park, who had died five years earlier in 1965 at the age of 51 from cirrhosis. 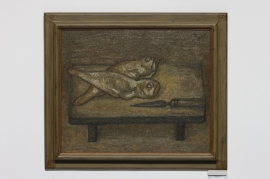 Park left around 500 works of art, according to the museum.

The museum is hosting the 55th memorial exhibition of Park, featuring his works as well as archive materials from late novelist Park Wan-suh and ceramics artist Whang Chong-nye, another figure in the arts who had shared life at the post exchange together.

The exhibition is especially significant as the artist’s masterpiece, “A Tree and Two Women,” is being shown to the public for the first time in 42 years. The piece is considered the representative work among Park’s series of bare trees.

The painting features a woman carrying a baby on her back while another passes by with a basket on her head. The bare tree symbolizes the poverty in Korea after the Korean War as well as hope for the spring to come. 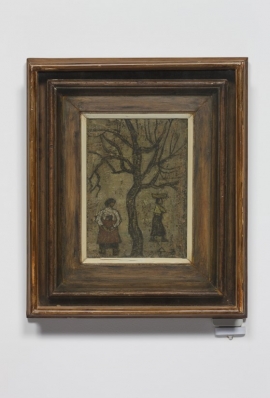 “We were very happy to acquire the artwork and focus light on the value of ‘A Tree and Two Women.’ We never thought the masterpiece would come to the market,” Eum Sun-mi, director of the museum, told The Korea Herald.

The museum did not hesitate to pay 787.5 million won ($656,000), a third of its operating budget, to acquire the piece, she said, adding that the seller had shaved off 100 million won in consideration of the museum’s budget.

“It is never easy to purchase Park’s artworks because his works are valued at more than a billion won on average,” Eum said. “However, we are trying our best as a museum founded in 2002 to commemorate Korea’s great modern artist Park Soo-keun.”

The memorial exhibition, which now runs through April 18, 2021, has attracted more than 200 visitors a day, according to the museum. 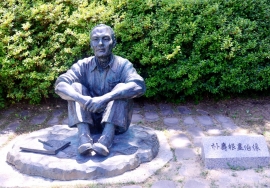