[Video] A home transformed into a shared office for NPOs 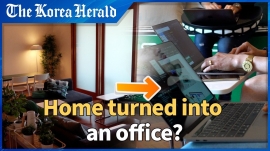 Dongrak-ga, a shared working space in central Seoul’s Jongno, opened its doors last month, offering space that nonprofit organizations in Korea can use without paying any rent.

Dongrak-ga translates into “a place where people come together for fun,” and was originally the house of Lee Joon-yong, the honorary chair of the corporation Daelim. After his retirement, Lee announced in 2015 that all his property, estimated to be worth around 200 billion won ($165 million), would be donated to the UniKorea Foundation to help foster peace on the Korean Peninsula.

In 2019, Lee donated his building to the Babo Nanum Foundation for his home to be used to serve public needs. Daum Foundation, a nonprofit that has expanded steadily since its establishment in 2001, took over its operations. The CEO of Daum Foundation, Bang Dae-wook, came up with the idea to forge a partnership with IKEA Korea for the renovation and redesign of the shared space.

In recent months, the novel coronavirus pandemic has hit shared space operators hard, including those that had expanded their business to different locations and abroad. As a result, some shared space operators were forced to lay off employees and downsize, following a drop in demand for face-to-face contact over the past months.

Manager of Daum Foundation Park Joo-hee expressed both excitement and anxiety at the same time. “We have been planning this project since last year, but after the coronavirus outbreak we are a bit slow in progress. As of now, Dongrak-ga will still be holding more open-house sessions and meetups for future residents to come and have a look around. Our hope is that the place be used by 10 NPO groups by the end of this year.”

Daum Foundation is also aiming to build mutual networks among different nonprofits through the shared work space, generating some synergy from the project that provides both office and communal space.

Dongrak-ga will be accepting applications of potential residents through the Daum Foundation’s website starting this September. Nonprofit organizations interested in tackling social problems, but that have difficulty securing space in the metropolitan city, can take the initiative to join.

The space will be open to nonprofit organizations for the next three years.