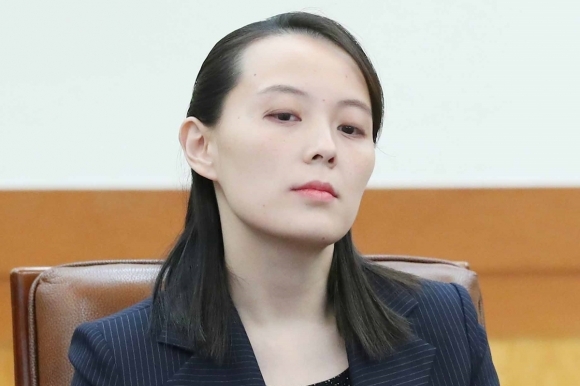 (Yonhap)
The derisive, invective-filled tirade against President Moon Jae-in by the sister of North Korean leader Kim Jong-un is drawing public outrage here and emboldening hawkish calls for a tougher stance against the recalcitrant regime.

On Wednesday, Kim Yo-jong, the first vice department director of the ruling Workers' Party's Central Committee, slammed Moon over his recent speech marking the 20th anniversary of an inter-Korean declaration and other remarks, calling them "disgusting" and "shameless sophism."

South Korea's presidential office Cheong Wa Dae struck back, saying her statement was "rude and senseless" and warning that it will not tolerate the North's "unreasonable words and acts" any more.

Kim Yo-jong has recently been at the vanguard of the North's verbal attacks against the South in fury over what it claims to be Seoul's "connivance" of North Korean defectors who have flown anti-Pyongyang propaganda leaflets into the communist state.

"(Moon) reeled off a string of shameless and impudent words full of incoherence," Kim was quoted by the North's official Korean Central News Agency as saying. She was referring to Moon's speech on the 2000 joint declaration for cross-border reconciliation and cooperation.

"He spoke in the capacity of the 'president,' but it was sickening to listen to his speech, devoid of responsibility and will before the nation and direction and measures for putting the present situation under control but packaged in self-defense, avoidance of responsibility and deep-rooted flunkeyism," she added.

Kim also appeared to pressure Moon to apologize for the failure to block North Korean defectors from sending the leaflets.

"The recent speeches made by the South Korean chief executive should have reflected his apology, repentance and firm pledge to prevent the recurrence of similar occurrences," she said.

"But his speech was full of excuses and spurious rhetoric to get rid of responsibility, without any mention of the means and the end," she added.

Taking issue with Moon's renewed appeal for inter-Korean cooperation and against "going back to the past period of confrontation," Kim criticized Moon for shifting the blame to the North for strained ties.

"It is truly sophism full of shamelessness and impudence," she said. "Now they are trying to shift the responsibility for the results of their own making on to us. This is literally a brazen-faced and preposterous act."

The North Korean leader's sister also accused the South Korean president of "servitude and submission" in a swipe at Seoul's policy coordination with Washington on North Korea-related issues.

"(Moon) said that the favorable situation is not provided only by the will of the north and the south and he would make strenuous efforts to get consent by the international community. His spate of flunkeyist jargon glaringly revealed his true nature of depending on foreign forces," Kim said.

"His blind creed that 'alliance' must be put above the north-south agreement and the power of 'ally' brings peace led him to follow the path of continued submission and shameless perfidy," she added.

Kim went on to say that she prepared a "bomb of words" for other North Koreans to know, as she felt "it was regretful to see his disgusting behavior alone."

"Whenever he makes public appearances, he lets out childish and hope-filled dreamy rhetoric and tries to look big, just and principled just like an apostle of peace," she said.

Observers said that her diatribe targeting Moon might be aimed at ratcheting up pressure on Seoul to find a way to break the logjam in nuclear talks with the US and pave the way for sanctions relief, which the North believes is key to improving the economy. (Yonhap)