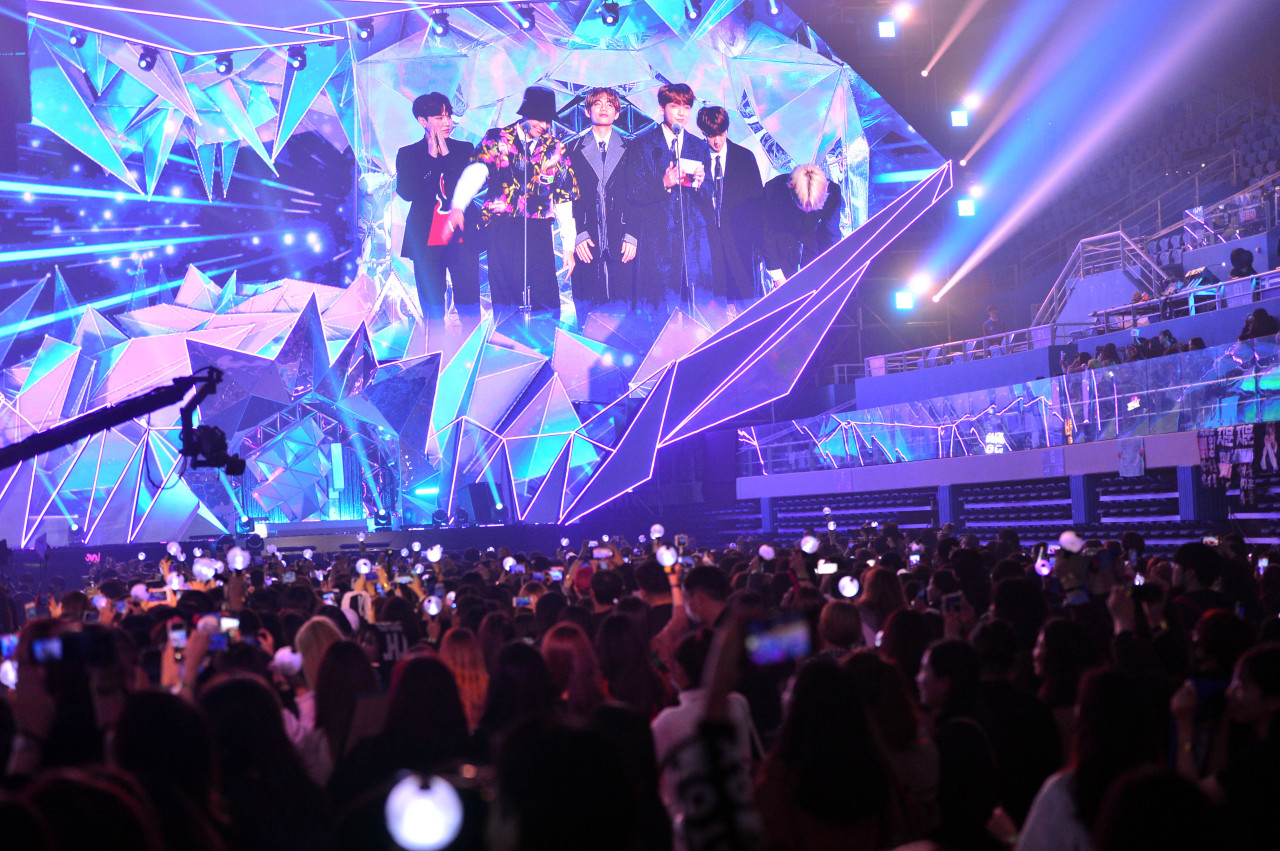 BTS performs at MBC Plus x Genie Music Awards 2018 (Park Hyun-koo, The Korea Herald)
Who are K-pop fans? It’s a question that not a lot of people bothered to ask until lately.

But that seems to be changing in the wake of Black Lives Matter protests across the world: K pop fans flooded the Dallas Police Department’s iWatch Dallas app with fancams and took over the hashtag #WhiteLivesMatter on Twitter with anti-racist messages. BTS fans raised $1 million in just over a day for organizations that help black people.

American actor and writer Jordan Peele said he “hearts #kpopstans” in a tweet, professional wrestler John Cena praised BTS and its fans, and the media covered the news extensively.

According to Michelle Cho, a media scholar at the University of Toronto, K-pop fans are “diverse, socially progressive, social media-savvy.”

“I’ve attended KCON a few times now and when you look at who attends K-pop fan conventions, who posts reaction videos, who makes themselves visible in the fandom, you see, at least in North America, that these are predominantly people of color,” she said.

While K-pop is not seen as progressive at home, where it is part of mainstream commercial culture, Cho says that elsewhere -- in places like North America and Latin America -- it remains subcultural.

“You need to have a certain interest in other cultures and the willingness to put in the time to find information about this culture, looking for translations and ways to access this whole subculture that requires a great deal of media-savviness,” she said.

The fandom also includes a sizable LGBT following, but that requires a more nuanced explanation given the lack of LGBT representation in the music scene -- with the exception of the first openly gay K-pop artist, Holland. 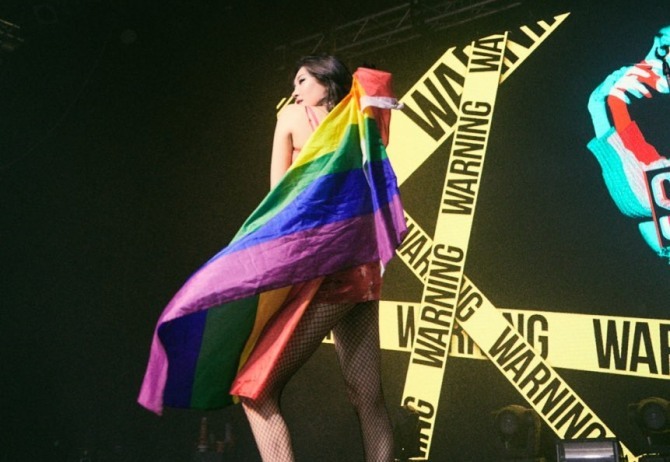 Sunmi poses on stage with a rainbow flag wrapped around her body while performing in Amsterdam. (Sunmi's Instagram)
“The relative safety that LGBTQ fans might feel within a fandom space for Asian pop artists has to do with a perceived lack of aggressive heteronormativity” -- which, she also points out, might be “based in racist stereotyped views.”

Despite the diverse and global makeup of the fandom, its members are quick to come together when it comes to achieving a collective goal and that comes from practice.

“K-pop fans, through K-pop, learn a lot of very valuable political tools -- learning about organizing around causes,” said CedarBough Saeji, a scholar of contemporary Korean culture. “And it can be something free like going to the website of iHeartRADIO and saying ‘I want you to play such and such song’ or you can organize around a cause, and like the latest case, it can require donations.”

She says it’s a form of learning how to form a power bloc.

“I think these young people who are learning today how to use social networking services to do so many things in terms of organizing are going to be a very significant political force in the next decade or so because they know how to organize, how to reach each other, make goals and accomplish them and so much is happening without a single person or overarching leader who is being paid to organize.

“In the future, they could be getting together to achieve goals, for example, like gay marriage,” she said.

OneInAnARMY, for instance, an online group that spearheaded the #MatchAMillion campaign following BTS’ $1 million donation, has a network of fans from different countries with various roles ranging from research and social media to graphic design, with many volunteers doing translation work.

Lee Gyu-tag, a professor of cultural studies at George Mason University, points out that the support the fandom has galvanized for Black Lives Matter in recent weeks is the most political stance it has taken yet.

“Although we’ve had cases like when BTS launched the ‘Love Myself’ campaign with the UNICEF and we’ve known that K-pop fans and musicians can do something, this is the very first moment we are witnessing that K-pop fans can engineer a social movement with a political purpose,” he said.

Though RM of BTS touched upon issues like police brutality in “Change,” his 2017 track with rapper Wale, K-pop as a whole has remained largely apolitical, especially compared with its fans, mostly in hopes of staying politically neutral to be acceptable to a wider audience.

But even that might change soon, as the industry increasingly finds itself under the global spotlight.

“It’s an ironic situation for K-pop. In its domestic market, it’s the mainstream music and distances itself from politics, but outside Korea, it might have to take a different political stance,” Lee said.

“These conversations will continue because K-pop is not separated from the world at large, where these issues still persist,” she said.

K-pop in the wake of Black Lives Matter

When Black Lives Matter protests began spreading and some K-pop artists and Korean hip-hop artists initially showed support, heated debate ensued over whether others should follow suit. The conversation, however, left many black fans feeling frustrated, especially given the impact that black music has had on K-pop.

“Black fans often call for other fans to learn more about black culture, but I think all fans would benefit from doing so,” said Anderson.

While people often think of genres like hip-hop and R&B as black music, it is also the case for other genres of popular music like rock and house, as well as the sophisticated choreography found in K-pop -- which, she explains, owes a lot to Motown groups of the 1960s. 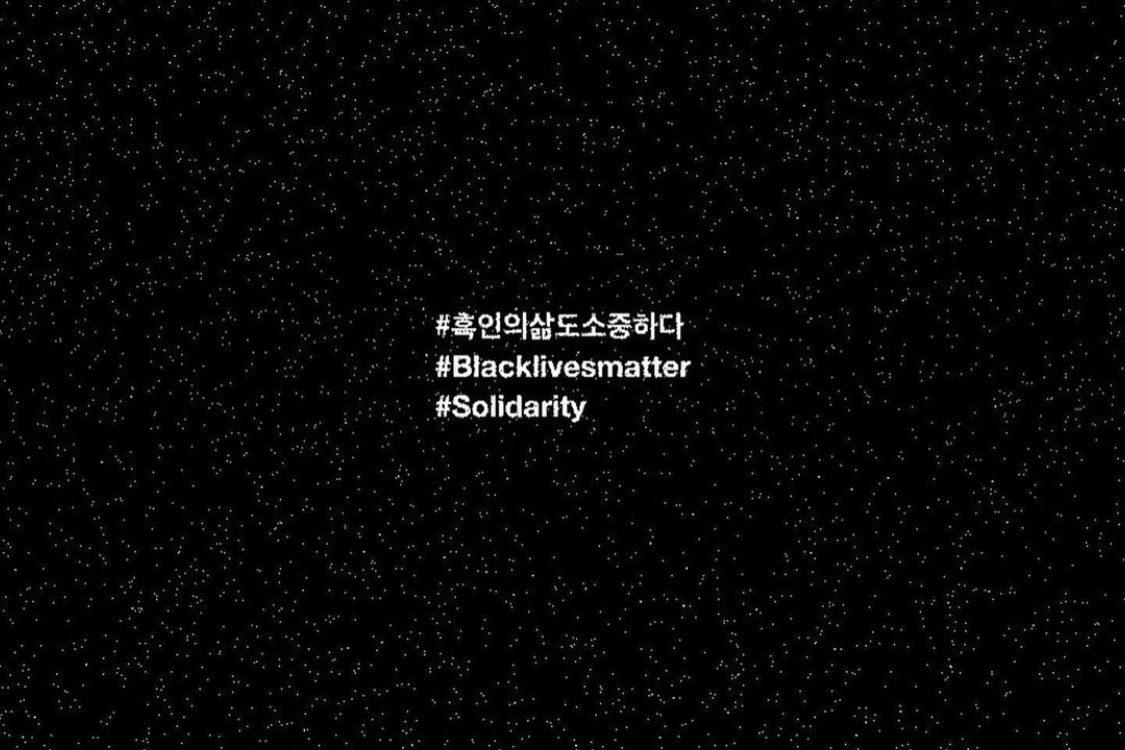 “Artists, directors, writers, dancers, designers, producers, stylists in the K-pop industry are all inspired by black culture whether they acknowledge it or not,” she wrote.

As social media often amplifies the loudest voices, though, often not based on correct information, Anderson wants to see change in the online debate, which she says oversimplifies both K-pop and black popular music.

“One thing that could help is if everybody became just a little more knowledgeable and used a little more context when we talk about K-pop, even when racially related events occur,” she cautioned.

BTS, Monsta X and Ateez are among the groups that have openly supported the Black Lives Matter movement, but BTS led the charge with its $1 million donation.

“If BTS had jumped in immediately and made a statement before there was some conversation developing in the fandom, it would’ve seemed empty and performative,” professor Cho said, calling the group’s response timely and considerate.

But Saeji argues that allowing idols to choose the topics that they are going to speak on is important.

“Early in their careers, BTS was accused of cultural appropriation, and in my observation, they worked very hard to educate themselves about the history of hip-hop and that’s why they have spoken out about Black Lives Matter. Some idols may not have done that background work, but BTS did it more than five years ago so it was speaking out naturally. I don’t think we can expect every artist to have an opinion on this issue,” she said.

Professor Lee is looking on the bright side.

“There are African American, Hispanic, white, Asian and Middle Eastern fans of K-pop, so conflict between fans can and will happen,” he said.

But while acknowledging problems like cultural appropriation and ethnocentrism within K-pop, Lee says he doesn’t think it is all negative for the future of K-pop.

“K-pop musicians or the industry are not really familiar with this kind of situation because it used to be music for only locals. But when fans are having conflicts or discussions openly, there will be a possibility for K-pop to be more internationalized and racially, ethnically diversified.”