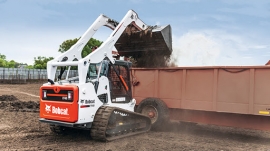 South Korea’s construction equipment maker Doosan Bobcat is under credit pressure as its US subsidiary Clark Equipment is looking to leverage $300 million via five-year senior secured notes in May, filings showed Thursday.

Clark Equipment’s leveraging plan is adding a financial burden to Doosan Bobcat, as affiliates and subsidiaries of conglomerate Doosan Group‘s liquidity crunch might spill over to Doosan Bobcat that is already suffering a sharp fall in sales due to the ongoing coronavirus crisis, according to credit rating agencies Thursday.

Moody’s Investor Service revised down the corporate credit outlook of Doosan Bobcat, which guaranteed the bonds, from “positive,” to “stable,” while affirming its “Ba3,” rating.

“The change in Doosan Bobcat’s outlook to stable from positive reflects our expectation that its financial leverage over the next 12-18 months will increase because of softer earnings and an increase in debt, as well as increased group-related risks,” noted Moody’s Vice President and Senior Credit Officer Yoo Wan-hee.

“That said, these risks are partly offset by Doosan Bobcat’s leadership position in its key markets, significant financial headroom as of the end of 2019, and good liquidity,” he added.

“The negative outlook on Doosan Bobcat reflects our view that the company’s overall credit profile will be under pressure for the next six to 12 months due to weaker earnings and liquidity pressure on the credit profile of its parent group, while the full effects of the COVID-19 pandemic remain highly uncertain,” Kim added.

Doosan Bobcat is 51.05 percent owned by Doosan Infracore, machinery manufacturing unit of Doosan Group. The equipment maker is likely to be affected by the risk-averse stance in the domestic funding market that could disrupt Doosan Infracore’s refinancing effort, according to S&P Global.

“Doosan Infracore’s heavy reliance on short-term debt (more than half of total debt) and ongoing refinancing needs expose the group to volatility in the funding market, which has become increasingly risk-averse.”

Also, the financial trouble of Doosan Heavy Industries & Construction -- which owns 36.27 percent of Doosan Infracore -- could spill over to Doosan Bobcat, Moody’s noted. Facing heat from dwindling demand for fossil fuel power plants and nuclear power plants, Doosan Heavy is under a self-rescue plan that involves layoffs and sales of key affiliates, in exchange for a 2.4 trillion won ($1.9 billion) bailout loan from state-run lenders.

“The ratings could also be strained if the credit quality of Doosan Bobcat’s immediate parent deteriorates meaningfully,” Yoo wrote.

“While these developments are negative for Doosan Bobcat’s credit quality and expose the company to a certain degree of event risk, these risks are partly offset by Doosan Bobcat’s listed status and the policy banks’ liquidity support for Doosan Heavy Industries & Construction.”

Doosan, a holding company of Doosan Group, recorded a 379.9 billion won net loss in the first quarter, a sharp turnaround from 54.9 billion won net profit a year prior, according to its consolidated financial statement.