4.4 million Koreans unemployed as of April on extended basis 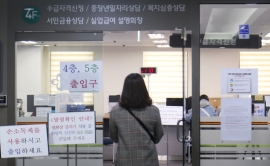 A job seeker enters a regional office of the Employment and Welfare Plus Center in Seoul, which accepts applications from those who have lost jobs for unemployment allowances. (Yonhap)

SEJONG -- The official number of unemployed in South Korea, compiled by the government, stood at 1.172 million in April, inching up only 19,000 from 1.153 million in January, despite the outbreak of the novel coronavirus that has slammed the country’s economy.

But the situation is far more critical when it comes to the extended definition of unemployment, taking “underemployed” people as the de facto unemployed.

According to the Supplementary Index III for Employment from Statistics Korea, the “extended-based” jobless rate reached an all-time high of 14.9 percent in April since the agency started compiling the data in January 2015.

This indicates that 4.42 million people of the economically active population, 29.68 million, were de facto unemployed -- 1 out of every 7, or more closely 3 out of 20.

In January, when the first case of novel coronavirus was reported, the corresponding figure was 12.1 percent. This showed that the tally for the de facto jobless stayed at 3.58 million. 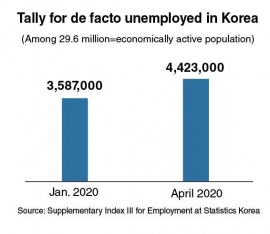 The comparison data means that the jobless figure involving underemployed increased by more than 830,000 during the Feb. 1-April 30 period, which contrasts from the official state number of 19,000.

The Supplementary Index III for Employment, a relatively new state method for calculation, regards underemployed people -- who work less than 36 hours a week and want to work more hours, as well as seasonal workers who are out of work for part of the year – as unemployed.

“The epidemic issue has aggravated the seriousness on employment, though the index III (de facto unemployment rate) has never dropped below 10 percent since the Moon Jae-in administration took office (in May 2017),” said a labor market researcher in Seoul.

The situation becomes more critical with respect to the younger generation.

The extended-based jobless rate among those aged 15-29 on the Supplementary Index III for Employment came to 26.6 percent, which means the youth unemployed plus underemployed tallied 1.26 million of the economically active population for the age group, 4.74 million, as of last month.

As the figures for January were 21.4 percent and 1.04 million of 4.87 million, the number of de facto youth unemployed increased by more than 210,000 over the past three months.

In contrast, the government’s official figure -- which is calculated in a conservative manner -- suggested the jobless rate among the young generation at 9.3 percent (with the number at 373,000) as of April. The figure also represented that the number increased only 44,000 during the Feb. 1-April 30 period.

According to data from the Organization for Economic Cooperation and Development, South Korea’s employment still falls behind the average of the 36 members. The country remained in the lower ranks for both the working-age population and young generation.

The OECD has compared the members’ employment rates -- as a proportion of the working-age population, or those aged between 15 and 64 -- based on figures from the first quarter of 2020 or the fourth quarter of 2019 according to reports from the 36 economies.

Korea posted 66.8 percent in the employment rate among those aged 15-64, which falls short of the OECD average, 69.1 percent, and the average of the Group of Seven, 72.2 percent. It ranked No. 28, the same spot it occupied as in the previous comparison of figures for the first half of 2019.

In contrast, Japan saw its ranking climb from fifth to fourth with 78.1 percent in the employment rate for the age group.

Moreover, Statistics Korea data showed that Korea’s employment for those aged 15-64 fell to 65.1 percent as of April.

In this coronavirus-hit situation, the government’s unemployment payouts for the jobless -- which has already shown sharp growth in 2018 and 2019 -- are estimated to have further surged so far this year.