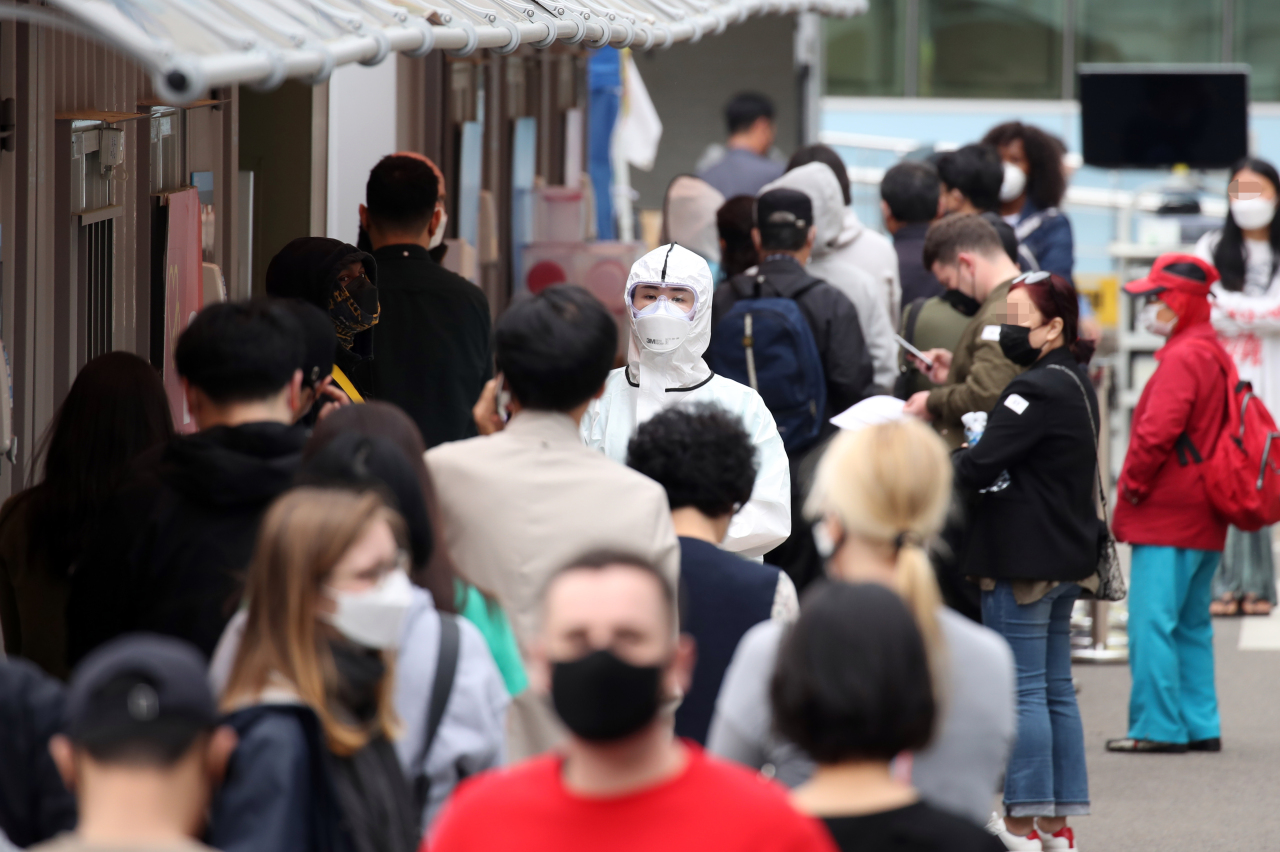 (Yonhap)
New coronavirus infections connected to bars and clubs in Seoul's multicultural district of Itaewon have reached 102 nationally, health authorities said Tuesday, amid concerns the figure may rise after more visitors are tested for COVID-19.

The Korea Centers for Disease Control and Prevention (KCDC) said that 102 cases linked to the Itaewon cluster have been confirmed as of Tuesday at noon.

They include two cases traced to two other clubs in addition to the five previously known establishments, indicating the situation may be more serious than known.

The latest cluster infection marks the biggest in Seoul after 98 cases were reported in relation to a call center in the city's southwestern ward of Guro.

Of the 102 cases, 64 have been reported in Seoul. Outside of the capital, 23 cases were reported in the surrounding Gyeonggi Province, followed by seven in Incheon, west of Seoul, five in North Chungcheong Province and one each in North Jeolla Province, the southeastern port city of Busan and the southern island of Jeju.

By gender, 92 were men, while 10 were women, according to the KCDC.

Earlier in the day, the KCDC said the country added 27 cases Monday, bringing total infections to 10,936 as of midnight.

The latest figure comes amid concerns that visitors to the affected facilities who show no or mild symptoms may further spread the virus in local communities.

Health authorities have been on alert after a 29-year-old tested positive after visiting five clubs and bars in Itaewon on May 1-2, in the first local infection reported in a few days.

The case quickly swelled into an infection cluster, affecting not only the 73 who had been in Itaewon but also 29 who were infected through secondary transmission. No tertiary transmission has been reported yet.

Health authorities have urged people who visited the area in late April and early May to voluntarily get checked for the virus.

The government has so far checked around 10,300 people, including 8,490 who had signed entry logs at affected facilities or voluntarily visited screening centers.

But identifying all possible cases has proven to be a tough task as entry logs at the clubs turned out to carry false information in many cases.

As of Tuesday, some 2,000 of 5,500 visitors who visited Itaewon clubs in the affected period were still not accounted for.

On Tuesday, the authorities said two people who each visited one of two other clubs in Itaewon -- Made and Pistil -- were confirmed to be infected with the virus, complicating efforts to trace the source of the latest cluster infection.

Officials said the 29-year-old patient, whom they had considered to be the first patient in the cluster infection linked to Itaewon, did not visit either Made or Pistil.

The development raised the possibility that the person may not be the source of the virus in the cluster infection linked to Itaewon.

Seoul Mayor Park Won-soon said the city has secured a list of 10,905 visitors in the area through data provided by mobile operators, and it has sent text messages urging them to go through virus screening.

The city also secured a list of 494 people through credit card transactions in the affected period, he said.

Park also said the number of people who have been screened has more than doubled over the past few days after the city government began to offer anonymous testing for those who do not want to be identified.

In addition to tracking and quarantining possible patients, municipal governments across the country have suspended entertainment facilities to further contain the virus.

As of Tuesday, 12 municipal governments -- including Seoul, Daegu, Incheon and Daejeon -- have ordered or were planning to impose an administrative order for shutdowns. (Yonhap)