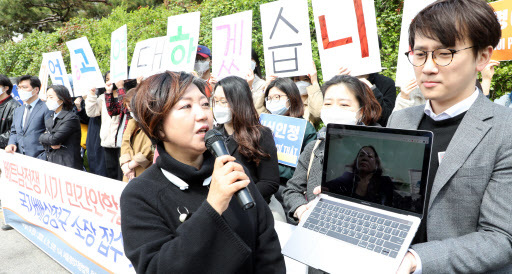 (Yonhap)
A Vietnamese woman filed a lawsuit against the Korean government on Tuesday over a massacre of civilians allegedly committed by South Korean troops during the Vietnam War, in the first of its kind filed some five decades after the atrocity.

The plaintiff is Nguyen Thi Thanh, 60, who lost family members at the hands of Korean troops in Phong Nhi in Quang Nam province in February 1968. She seeks 30,000,100 won ($24,400) in compensation and an apology from the Korean government.

According to her testimony, the incident took place when she was 8 years old, and she had to spend nearly a year in hospital after being shot in the stomach by Korean soldiers. In the village, some 74 people are believed to have been killed during the massacre.

“I hope this serves as a chance to restore honor for all Vietnamese victims, not only for the sake of my own rights and interests,” Nguyen said in a video call at a press conference held Tuesday in front of the Seoul Central District Court.

Korean soldiers are accused of brutally killing Vietnamese civilians, including many women and children, in villages such as Phong Nhi, Phong Nhat and Ha My in Quang Nam province during Korea’s 1964-1973 involvement in the US-led Vietnam War.

Under the authoritarian Park Chung-hee administration, Korea offered to send more than 320,000 soldiers during the Vietnam War to support the US in its fight against communism. Korea had the second-largest troop presence, following the US.

With no official figures available, the Korea-Vietnam Peace Foundation put the total killed in these massacres at 9,000 or greater.

The lawsuit marks the first of its kind since allegations of the wartime actrocities by Korean soldiers surfaced in 1999.

Korea has never formally acknowledged any massacres of Vietnamese civilians by its troops or officially investigated related allegations. It also maintains that the Vietnamese government is not demanding an apology.

The Vietnamese government has not demanded an apology, seeking to leave behind the past and keep the issue low-profile. Instead, the countries are focusing on building a future-oriented relationship.

Filing a suit against the government is a symbolic move to demand the government listen to the victims and, at the very least, launch a fact-finding investigation into the allegations, according to Lim Jae-sung, one of the legal representatives for Nguyen.

The amount of compensation she is seeking – 3,000,100 won – is 100 won more than the minimum amount required for a ruling to be made by a court here, he said.

There is sufficient evidence including specific testimony from the plaintiff, the US military’s audit report into the situation at the time of the massacre and Korean soldiers’ testimony, he said. The court proceedings are likely to begin in early September, with the ruling to be out about one year later.

Since 2015, Nguyen has actively testified about her suffering, demanding the Korean government apologize and investigate the killings, with help from an association of civic groups and lawyers.

In April 2019, she filed a petition against Korea’s presidential office on behalf of 103 Vietnamese victims, calling for the government’s apology and a fact-finding investigation.

The Defense Ministry, in its response, said allegations of the civilian massacre by Korean soldiers are not confirmed by their documents. There needs to be a joint investigation by the Korean and Vietnamese governments first to clarify historical facts surrounding the issue, but such circumstances have not yet been created, it said.

In 2018, a three-day “Citizens’ Peace Tribunal” was held in Seoul in April in the form of mock litigation where Nguyen testified in the presence of judges, including former Supreme Court Justice Kim Young-ran.

Nguyen won the case. The panel of the judges called the killings a “grave human rights violation and war crime,” ordering the government to conduct a fact-finding investigation.