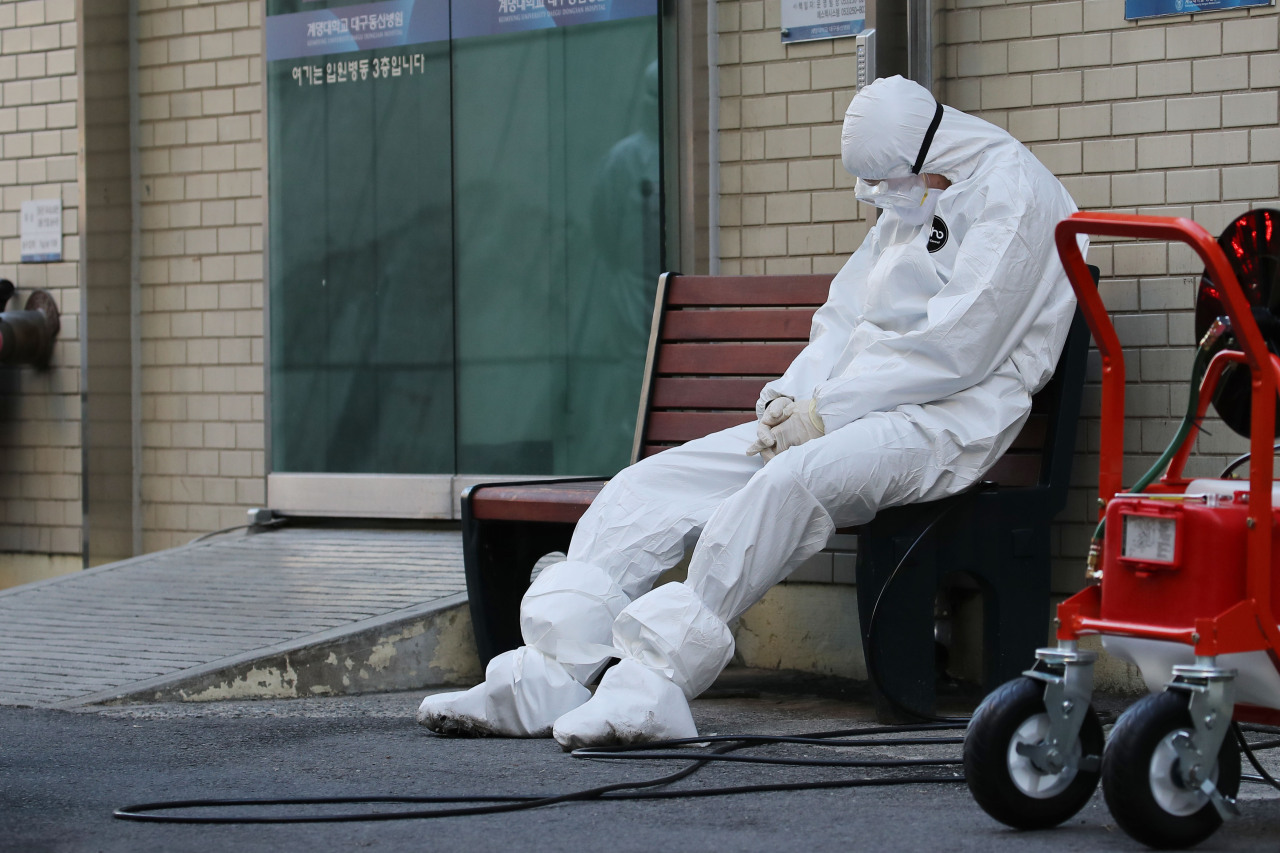 A health care worker sits outside a hospital in Daegu. (Yonhap)
A long, grim road is ahead in South Korea’s war against the novel coronavirus.

The message from the government was clear Saturday when Health Minister Park Neung-hoo admitted for the first time that ending the novel coronavirus outbreak was “a near impossibility” within a short time frame.

“This fight may drag on for months, or even years,” he said.

Infectious disease specialist Kim Woo-joo of Korea University Hospital in Seoul’s Guro-gu said that despite a recent slowdown, a rosy outlook was ill-founded and Korea was still lacking contingency plans for every scenario -- including a health care system breakdown as witnessed overseas and in Daegu.

“COVID-19 is the trickiest and most terrifying infectious disease I have seen in my 30 years of practice,” he said. “It makes other diseases that came before -- including SARS, MERS, Ebola -- look less intimidating.”

On the government’s proposal announced last week for easing up on social distancing to balance economic considerations, Kim said, “Nothing warrants this complacency.”

In a press briefing Friday when case numbers ticked passed the 10,000 mark, the Health Ministry said the government has begun to review the timeline for returning to the previrus routine, to be presented following the 15-day campaign for “intense” social distancing set to last until Sunday.

The ministry said the next day that the distancing will extend for another two weeks, citing the sluggish decline in numbers.

“The ‘intense’ social distancing has been in name only. No progress was made over the two-week period. We have not gone into lockdowns or any other measures of similar intensity,” Kim said.

“In Asia, Korea’s case numbers are still second only to China. Some of the wealthiest nations are stumbling over the virus -- why do we think it will go any easier on us?”

Kim says it’s not too early to start discussing how to ration medical resources in the face of shortages.

“People have died without hospital beds in Daegu. Heartbreaking choices might need to be made in terms of which patients get lifesaving treatment and which don’t.”

A top priority has to be placed on developing vaccines and treatments, he said, which could not come soon enough.

Even in the most optimistic scenario, it will take over a year -- “18 months if everything went right” -- for a vaccine to be ready, he said.

Until then, there is “no alternative to social distancing” on the horizon and the distancing practice may have to go on indefinitely, said Lee Jae-gap, an infectious disease expert who is on the medical societies’ joint committee for COVID-19 response.

Lee warned of an impending virus surge in Seoul.

“The rate of increase in new cases in Seoul and Gyeonggi Province is on the rise, with about 70 percent of all imported cases based there,” he said, adding that the virus curve in the metropolitan region suggested a tipping point.

The virus numbers in the greater Seoul area hit over 1,000 on Thursday.


Voices from the field


Health care systems may not sustain another spike like one seen in late February, front-line doctors worry.

“I wish the officials would realize the outbreak is already pushing the health care system to the brink. What’s happening in Italy and New York can easily happen here too,” said the director of a respiratory ward at a Seoul hospital with capacity of over 700 beds.

“I fear we may be a cluster or two away from a collapse.”

The exhaustion of doctors and nurses is a problem at hospitals everywhere, including Seoul and the surrounding metropolitan area, not just in hardest-hit Daegu, according to pulmonologist Han Chang-hoon of Ilsan Hospital, run by the state health insurance service.

“Health care providers have been working on an emergency schedule -- as they should -- for over two months now and holding up. Some of us haven’t been able to go home since the outbreak first infiltrated the country,” he said. “There’s no backup workforce for when doctors burn out -- it takes over 10 years to train one.”

The president of the Korean Society of Infectious Diseases, Peck Kyong-ran, wrote in a Facebook statement on March 26 that doctors working with virus patients were “beyond exhaustion” and unable to afford to have more patients come in from abroad.

“Health workers are not xenophobic. They are just tired,” one primary care physician said in a phone interview.

For the past month, he has been volunteering at a public virus testing center every day after the regular 9 to 6 office hours at his clinic in Yongsan-gu, central Seoul.

“Shutting the doors is so that we can direct focus on those who are here -- including foreigners.”

The Health Ministry’s explanation for allowing entry to foreigners has been that they account for only about 10 percent of all recent arrivals and that the 14-day mandatory quarantine imposed since Wednesday blocks unessential visits.

But upon scrutiny of the government data from March 25 to 31, the week leading to the effectuation of the mandatory isolation, 26 percent -- or 13,902 out of 51,757 inbound travelers --, not 10 percent, were in fact non-citizens. The ministry has not responded to the press corps’ request for comments on the disparity.


Next course of action


All nonessential travel, both coming in and going out of the borders, requires restrictions, said pulmonologist Chun Eun-mi of Ewha University Medical Center in southern Seoul.

“Pandemic in a hyperconnected world means the threat of a new wave of infections from overseas persists, even if an individual country manages to get the outbreak under control at home,” she said.

The global virus case tally shot past the 1 million mark over the weekend, according to the latest World Health Organization report.

The Korean Medical Association’s spokesperson Park Jong-hyuk said the global crisis called for a shift in paradigm, that tightening borders was “international social distancing” instead of a travel ban.

He cautioned against fatigue setting in from the prolonging outbreak.

“Burnout is an issue not only for health care providers, but for every member of the public adhering to distancing and other precautions on a daily basis.”

The government has had qualms about putting people through extended distancing.

But backing down from social distancing measures simply because they had gone on for too long will likely backfire with a renewed cycle of spread, said former director of the KCDC Jung Ki-suck.

Jung, who headed the agency from 2016-2017, said the possibility of the outbreak coming to an end was “virtually nil in a foreseeable future” without vaccines or cures to beat back the virus.

“Assuming the virus can’t be stopped, aggressive interventions may be necessary to slow the transmissions and keep the number of patients below the capacity of the health systems, and buy time for determining the next course of action.”