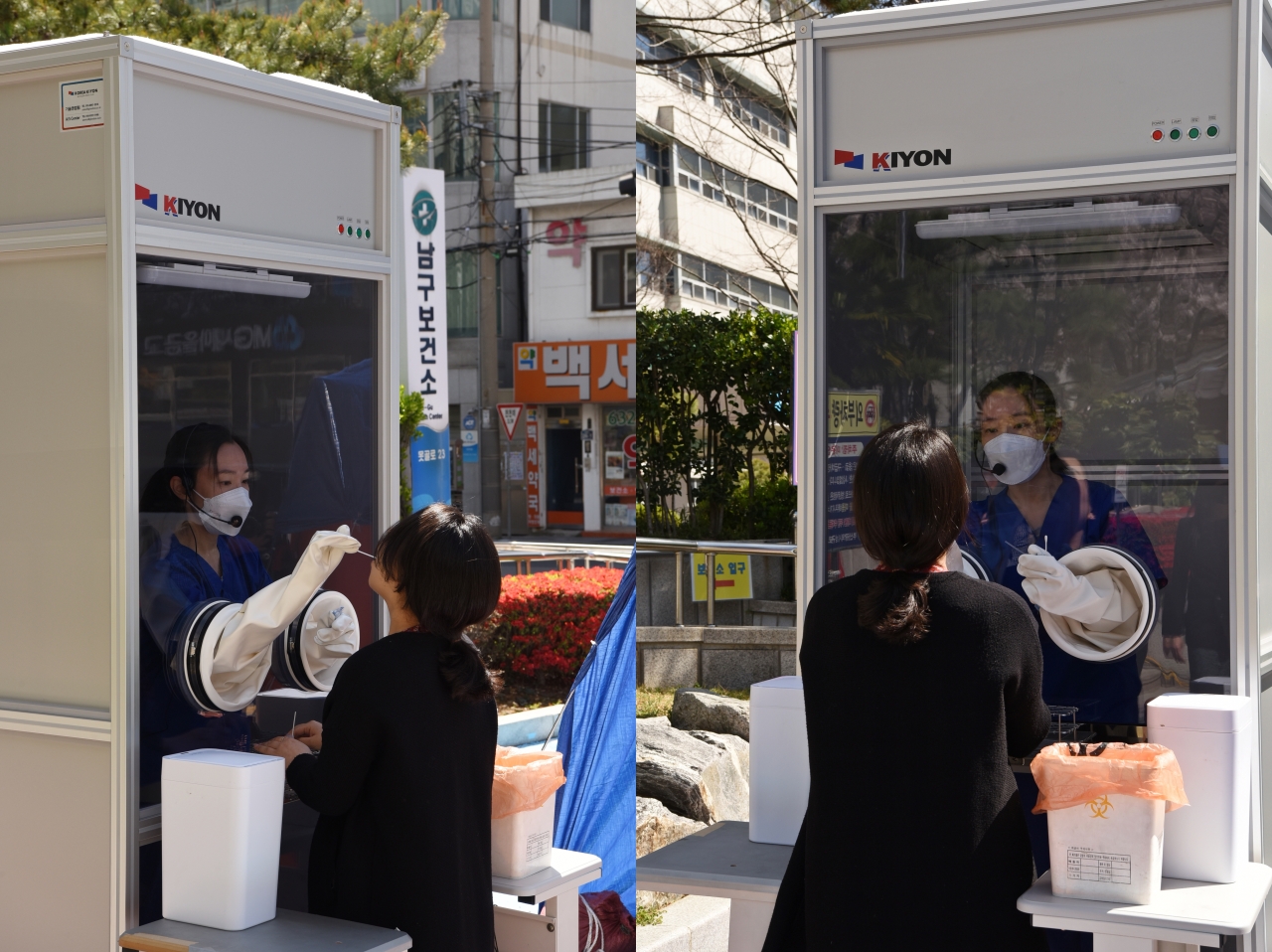 A testing booth at a public health center in Busan allows medical workers to swab patients without having to put full protective gear on. (Busan Nam-gu Health Center)
Health care workers at the forefront of South Korea’s virus battle are coming up with novel ways to better arm themselves as they strain to stay ahead of the rapidly evolving outbreak.

A virus testing booth developed by a doctor at a public health center in southern Busan allows health workers to wear minimum protection as they swab patients.

“Health care providers require no personal protective equipment as they stand inside the booth and take samples from patients using the gloves protruding outwards,” said Dr. Ahn Yeo-hyun, who has been working there since December 2016, in a phone interview.

Ahn, 41, expects the booth will boost testing efficiency as well as convenience while keeping both providers and patients safe. By requiring less protective gear, it will also save time getting in and out of the equipment, reduce medical waste and help improve shortages.

“Having the full layers of the suit on can get stifling after a while, especially with the weather getting warmer,” she said. “The booth is positively pressured to protect the person inside by blocking out air from circulating in.”

Designed to be mobile with fixable wheels on the bottom four corners, the booth can be taken outdoors on good days to scale down the need for disinfection.

“Disinfecting work took longer with existing testing booths where patients as opposed to health staffers were inside,” she said. “Now, it takes only about five minutes to disinfect the gloves and outer surfaces before the booth is available again for the next patient.”

At a city-run testing facility in Seoul’s Boramae Medical Center, a transparent wall with gloves attached to act as a barrier between the health workers and patients as the virus tests are run.

The compartment, deployed since early February, was inspired by the glove boxes used in labs, the staffers there said. 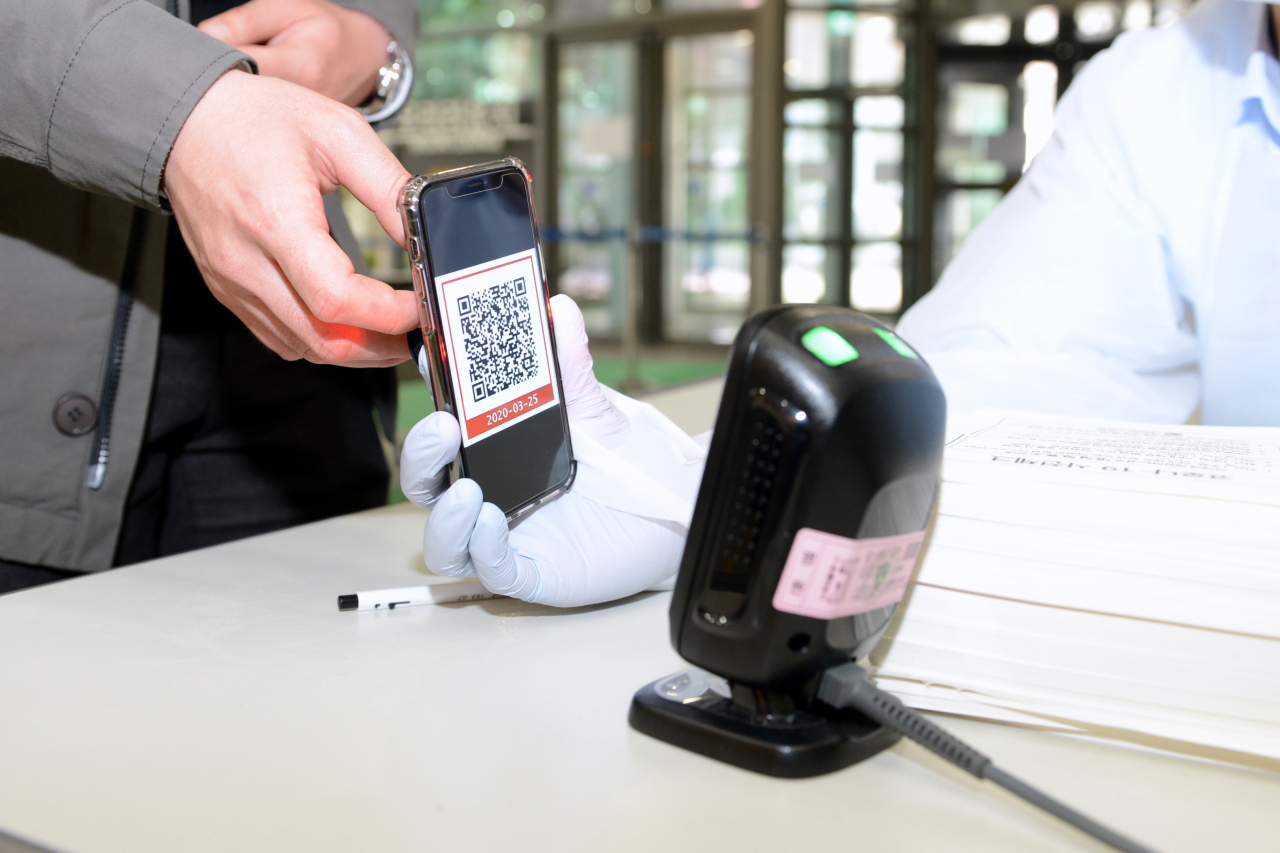 A QR code is generated after a patient completes the questionnaire on the mobile application. The code is scanned at the front desk of the hospital for registration. (Severance Hospital)
Hospitals are turning to technology in updating and expanding their toolbox.

At Severance Hospital in western Seoul, patients can check in at the hospital and take questionnaires for symptoms, travel history and other relevant information using mobile applications.

Since launching on March 12, over 6,000 patients use the mobile survey daily, according to a hospital official.

“The mobile system not only speeds up the reception procedures, it also cuts down risks of transmissions by eliminating human-to-human contact,” he said.

Another hospital in Seoul -- Seoul National University Hospital -- has a robot to fill in as the receptionist in similar efforts to prevent spread and to overcome short-staffing issues. A locomotive cleaning robot with air-purifying capabilities moves around autonomously around the hallways to keep them clean and well-ventilated as well.

The hospital is also offering over-the-phone consultations for patients in the country’s worst affected regions of Daegu and North Gyeongsang Province. After speaking to doctors on the phone, the patient is given prescriptions digitally for use at nearby pharmacies.

“Oftentimes these innovations come from health professionals in the field working hands-on with patients because they are the ones who know best what goes on in practice,” said Ahn. “Hopefully these little things we try can better equip us in coping through the crisis.” 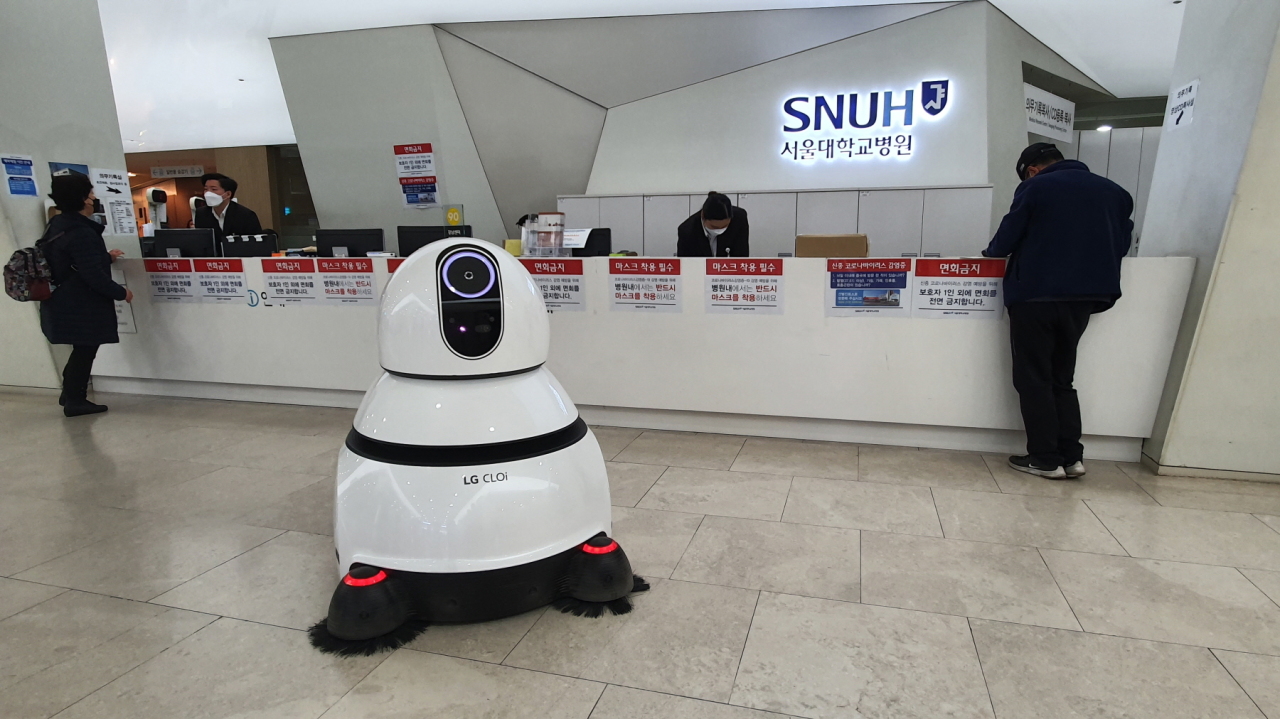 A cleaning robot with air purifying capabilities is at work at a Seoul hospital. (Seoul National University Hospital)
By Kim Arin (arin@heraldcorp.com)