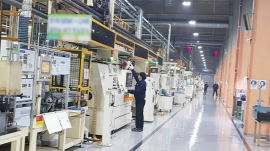 The novel coronavirus pandemic has exposed the vulnerability of South Korean industries that are deeply integrated with the global supply chain.

Korea’s global value chain participation rate was 55 percent and ranked sixth among 18 developed economies of the Organization for Economic Cooperation and Development countries as of 2017, according to a recent report of the Korea International Trade Association.

The nation’s active role in global production, in turn, has revealed fragility amid production disruptions in China and falling demand from the US and Europe.

“China has recently been shifting away from its conventional role of importing materials and intermediate products for further processing before exporting to other countries. It is expanding its own production of intermediate goods with growing industrial sophistication,” said Joo Won, a senior analyst at Hyundai Research Institute.

“Such a trend is being reinforced because of the COVID-19 outbreak. China’s weakening role in the global value chain will be a downside to Korea’s export economy -- highly dependent on exporting intermediate goods,” he said.

Amid the prolonged coronavirus outbreak, Korea’s exports to China fell for two months, according to KITA. Last month, exports to the neighboring country reached $8.93 billion, down 6.6 percent from a year earlier. In January, it saw a 10.7 percent drop on-year.

Coronavirus-led production disruptions in China also took a toll on the nation’s imports. About 30 percent of the nation’s imported intermediate goods come from China. Many of them are critical to Korea’s key industries, such as electronics, chips and automobiles, according to the Korea Importers Association.

Last month, Korean carmakers had to slow down factory lines and suspend production lines for a few days due to the disruption of parts supplies from China, where the virus originated.

Now, the epicenter of the coronavirus is shifting to the US and Europe, which have already seen border closures and production disruptions. This will hit Korea’s high-tech imports from the regions and end-user demand in the markets, industry watchers said.

This week, US semiconductor equipment company Lam Research decided to suspend operations of its plants in Fremont and Livermore, California, for three weeks, on government guidelines. As Lam is one of the global big three chip equipment providers, their plant suspension may affect facilities or ramp up production of the world’s largest memory chipmakers, Samsung Electronics and SK hynix.

Applied Materials, another chip equipment manufacturer, has started teleworking system from its headquarters in California. Dutch firm ASML, which is the only manufacturer of extreme ultraviolet equipment in the world, advised workers to stay home.

As for exports, although the US and Europe trade less with Korea than China, falling end-user demand from the global consumer bases will indirectly “hurt” Korea’s intermediate goods exported to China in a chain reaction, said Kim In-cheol, chief of the Korea Institute for Industrial Economics & Trade’s industrial policy research division.

The United Nations estimates that China’s production slowdown in the wake of the new coronavirus infections will lead to a drop of $50 billion in global exports and $3.8 billion in South Korea. The export decline is expected to “last” until the development and distribution of the COVID-19 vaccines, predicted the Korea Institute for International Economic Policy.